Blood on the Bayou 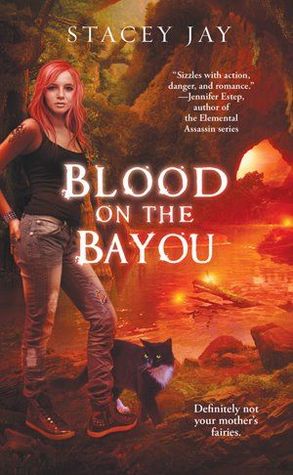 Life in Donaldsonville, Louisiana may have settled down in the three weeks since Annabelle Lee discovered...so to speak...who had killed a child and left her body in the bayou, but that doesn't mean that Annabelle's life in any way resembles what it had been before the revelations, losses, and painful realizations bulldozed her body, heart, and mind during that investigation. Hey, at least she still has the booze. Thankfully, she still has the booze.

Her relationship with Cane is still in limbo and she's got psychic abilities she barely understands. A brand-spankin' new Harley is stuck in her kitchen, stocked with the shots that will keep her from turning into a bunny-smashing psychopath. She's knows secrets about the sort of people who would whistle a jaunty tune while executing her in horrible and bloody ways if she ever reveals them. Oh yeah, and she's being randomly stalked by a tall, dark, and sinfully gorgeous man who she never sees coming...because most of the time he's invisible. Toss in a visit from her ex-boyfriend Hitch, who has come back to town to get her help investigating the death of a friend, and Annabelle's plate is more than full, it's overflowing and spilling angst, confusion, and tension all over the place.

Helping Hitch is complicated. Being with Hitch is complicated. She still loves him. She doesn't want to, but she does. She also doesn't want him to die, and as she's the only Immune he knows in town, one of the rare five percent of the human population who is immune from the deadly bite of the mutated fairies in the bayou, helping him is something she feels compelled to do. She agrees to head back into the bayou and figure out the connection - if there is one - between smuggled goods, men who appear to have been kidnapped and tortured by government operatives, caves where mysterious goings on have been reported, and fairies who, despite all prior knowledge, can speak. Fairies who, despite her immunity, seem quite intent on killing her ugly.

And Annabelle is going to realize that the past three weeks, when so much of her life got tilted upside down and flipped around and around, were positively Utopian compared to what's coming next. That is, if she survives what's coming next.

I liked Stacey Jay's introduction to the flawed and damaged Annabelle Lee in her series debut, Dead on the Delta. It was exactly the sort of dark, deadly urban fantasy that gets my Happy Reader lights flashing. Annabelle herself was a bit more full of self-loathing and apathy than I found completely appealing for a heroine, and the book was a bit more heavy on the emotional angst than I prefer, but I loved the nearly post-apocalyptic world that Jay created and the plot was spot-on awesome.

Blood on the Bayou is better. In every way.

Still horribly and wonderfully flawed but much less apathetic and self-destructive, Annabelle Lee has matured in this installment. She was far more sympathetic to me as she struggles with a case that may end up ripping away from her everything she thought still true at the end of the last book. Life is definitely not full of fluffy puppies and dewy daffodils in Donaldsonville, and the Bayou is as deadly as it is beautiful, but Annabelle seems to attract the sort of horrific trauma that could keep a cadre of therapists in Jaguars and BMWs for a decade. Man, that makes for some deeply disturbing and fabulously entertaining reading!

I have to admit, I was Team Hitch in the first book. I've never quite warmed up to Cane, though he seems like a nice enough guy. That's the problem, actually. Annabelle was in such a wretchedly unhappy place in her life in the first book that frankly, I thought Cane was far too good for her and didn't deserve the drama that cloaks Annabelle like a death shroud. Hitch, on the other hand, has always been screwed up, though he hides it, and I felt for the pain of Annabelle's unresolved first love. Not to mention, after the shit Hitch pulled when they split up all those years ago, I felt he deserved the healthy helping of angst that would come from being with Annabelle. Twisted of me, but true.

Then I read this book and went from Team Hitch to Team Burn-Hitch-In-Effigy in six point two chapters (or less). I was thrilled that the one major unresolved issue between the two of them was finally addressed, though, and the scene in which it was dealt with was perfectly dripping with pathos. That being said, had I been Hitch's right hand fairy-repellent in this book, I would have shot him myself and washed my hands of him. Weak, desperate, wishy-washy, Hitch is an emotional quagmire that Annabelle doesn't deserve to suffer. I had moments where I actually hated him and would have heartily enjoyed his painful, screaming death.

As for Tucker...well...he's my favorite secondary character in this series so far. For more reasons than the potential horizontal action he could have with Annabelle, too. I love the mystery surrounding his past, his personality, and his motives and loyalties. I love his irreverent front and the depth of his awareness of Annabelle. The chemistry between them - not just sexual, but character-wise - is fantastic. And he steals every scene he's in. I want more and more and more of him.

There was a lot going on in this book. Jay certainly doesn't skimp on plot points and story layers. I found the fairy stuff and the ramifications of Annabelle's mysterious transformation more engaging and compelling than Hitch's investigation, but the threads were woven together with a cohesion that balanced out the personal/relationship threads and held my interest throughout.

There were a couple of weird things though. Maybe I missed something, but Hitch's FBI partner and significant other Stephanie - thankfully not actually present in this book, because I liked her in the previous book about as much as I like scooping cat poop - is referred to as Hitch's fiance in the last book and in the beginning of this one. Then later she's referred to as his wife by both Hitch and Annabelle. More than once. It wasn't clear to me if there was a reason for that. I was reading an ARC, though, so maybe that isn't in the final product.

Then there's the final chapter of the book. I can't understate how very much I disliked it, and it's the sole reason I'm giving this book four stars instead of five. After the pulse-pounding action, drama, danger, terror, and angst of all twenty-nine preceding chapters, chapters that forced me to bleed with Annabelle, mourn and cry and rage with her as she did, sweat and scream and fight beside her, I was suddenly and ruthlessly shoved six weeks into the future and had almost every major plot point and story element summed up or capped off in Annabelle's thoughts preceding an event that itself popped up out of nowhere considering where the lives of the involved parties were in the last spot they were mentioned.

I was more than a little gobsmacked by it all, to tell you the truth. Not only do I find that sort of summary resolution dénouement to be a horrible plot device that cheats readers out of the emotional triumphs and tragedies that would have evolved from several of those points being written out in real time, but in this case in particular, several of the items wrapped up in the fewest words possible didn't even make sense. One major plot point was glossed over as if it had no consequence at all. I felt like I was being force-fed a Happy for Now ending that diminished the excellent storytelling leading up to it.

Up to that point, this was a fantastic book on every level, one that delighted even as it tormented and traumatized. There's so many things I like about Annabelle. She's so wonderfully flawed and yet, in this book, she's trying in a way that I felt was missing in the first book. I'm dying to find out how the revelations and developments of in this one serve to enhance and evolve her character as her journey continues. Plus, more Tucker. I definitely need more Tucker. There just ain't no bad to be had there. 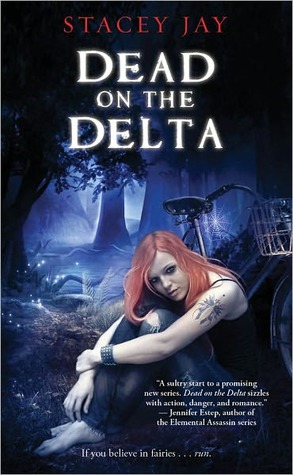 Return from Blood on the Bayou to Urban Fantasy Book Reviews

Return from Blood on the Bayou to OGBDA Book Review Home