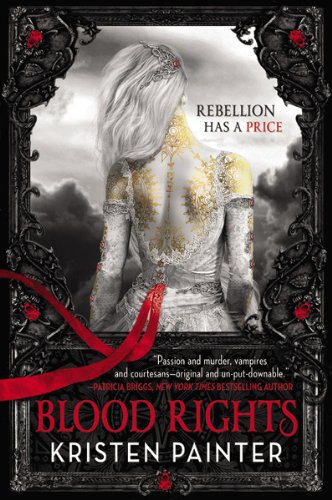 Disclosure: An ARC of this book was provided to me by Orbit publisher Hachette Book Group via NetGalley. This rating, review, and all included thoughts and comments are my own.

Chrysabelle is on the run. Her patron has been murdered and members of the vampire nobility want her to answer for the crime. Unfortunately, that's not the worst of it. One of them thinks she has a priceless and powerful ring that had been in her patron's possession, and that has painted an even bigger target on her back. She is comarré, an elite breed whose blood is prized by the richest of the nobility for its power and taste. The comarré are a secretive, highly trained group, but they are in service to vampires, and Chrysabelle can't turn to them for help.

That's why she goes looking for someone on the fringes. She's trying to meet with a human. She comes face to fangs with a vampire instead.

Malkolm is anathema. Double-cursed and outcast, he's doomed to kill every time he feeds from the vein, then have each victim's soul torment him for eternity, screaming in his head until he becomes a raving monster. The last thing he needs is to come across the seductive scent of a comarré. The last thing he wants is to have anything to do with whatever crap Chrysabelle brings with her. Unfortunately, she doesn't seem keen on leaving him in what little peace is afforded to him.

Maybe he's thrice-cursed, after all.

Now he's stuck helping her stop a vicious, power-hungry vampire from revealing the mystical races to humans and starting a war that could only have one bloody, catastrophic end for all concerned. Doesn't mean he has to be happy about it, or with Chrysabelle for dragging him into it all.

Stong, independent heroine who can kick a fair amount of ass. Check. Dark, tortured hero who exudes a delectable sensuality. Check. Complex world and mythos, vibrant settings, and a narrative that reads with smooth ease. Check. A plot that is both grim and dangerous, a little mysterious, ripe with secrets and conflicting agendas, and just enough humor sprinkled throughout to keep it from being morose. Check.

Kristen Painter's Blood Rights has just about everything that most tickles my fancy in urban fantasy series debuts. Because of that, there were parts of this book that thrilled me and made me excited to continue on to book two. There were also a few things that gave me some trouble.

Though I loved the idea of the futuristic setting (the year is 2067), there wasn't enough world building for me to grasp the culture and social differences in that time, nor was there anything inherently futuristic in the technology or industry that I noticed. The existence of vampires and othernaturals wasn't enough to do it because of the very covenant that keeps the mortals oblivious to them. There were some mentions of locations, like New Florida, but without any frame of reference or explanation, there just wasn't anything to solidify the world in my mind. The futuristic setting ended up seeming inconsequential. Also light on definition was the vampires place among humans and comarré origins and history.

The Big Bad was definitely both big and bad, though. A real nasty piece of work there. I wish she was a little less clichéd in her motivations and edge-of-insane thirst for world domination, but there were a couple of unexpected twists, too. I love unexpected twists.

I have to admit, the plot got a little confusing to me towards the end. And there were some things about Mal's dual curses that never made a whole lot of sense to me. Some of those plot elements could have been better-developed and more thoroughly embellished.

Thing is, though, even when combined, those are relatively minor issues that could very well be cleared up in the next installment. They didn't detract all that much from my appreciation of this debut. More troubling was my reaction to Chrysabelle and Mal. I was over halfway through the book and I still wasn't loving either of them. In fact, at the halfway mark I was actually disgruntled by my disappointment in them as the main characters. I didn't find Chrysabelle sympathetic for her cushy century-long existence and I thought Mal was a pretty morose jerk. I warmed to them both in second half of the book, but my negative impressions of them in the beginning affected my overall enjoyment of their story.

One of the most positive aspects of the book for me was that it felt very much like the start of a series arc the author has well thought out and tightly planned, as opposed to some that feel more like an initial overall idea that will meander a bit alongside and around each book's individual plot arc. I don't mind the meander in my paranormal romance series, but I prefer my urban fantasy to have a well-defined series arc that progresses through each book as the characters evolve and develop alongside it. If the impression I got from this book bears out in this series, I'll be a very happy reader.

Oh, and one more thing. I don't normally comment on it because it has no bearing on book content, but wow... That is one stunningly gorgeous book cover. Truly fantastic.

Return to top of Blood Rights