Just a Little Too Much 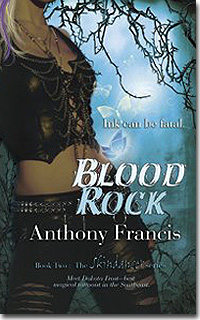 Dakota Frost may be the best magical tattooist in the Southeast (and she is - just ask her), but turns out that doesn't amount to much when you're struggling to get your kid into school. Sure, parents do that sort of thing all the time, but not many of their children have the same sort of special needs. Special needs befitting a weretiger with a full body tattoo, tail, and ears...and a mouth on her that would make a sailor on leave blush. And Dakota may be far left of center herself, but she's determined to get Cinnamon - the young street girl formerly called Stray who Frost is in the process of adopting - the schooling she needs. In some ways, at least according to Cinnamon, Dakota is positively square.

Before their appointment at the next school on the list, though, a chilling call comes in from a close family friend and pseudo uncle, also known as Atlanta PD's Detective Andre Rand. Normally all kinds of smooth, Rand sounds out of sorts and freaked out, and he urges Dakota to hurry across town and meet him at Oakland Cemetery. Even though both his tone and the request concern Dakota as she and Cinnamon hurry over there, nothing could have possibly prepared her for what she would see once she arrives: a friend, the vampire Revenance, slowly being crucified by the magical graffiti that is bursting from a wall in the cemetery, writhing and curling around him, pulling him apart with tendrils of malignant, magically-infused, spray painted topiary.

If being utterly helpless against a source of magic she's never seen before and watching a friend die ugly because of that helplessness wasn't enough, Dakota learns Rev's death isn't the only trouble. Vampires and weres have disappeared and the writhing, deadly graffiti is popping up all over Atlanta's Edgeworlder areas, those areas frequented by the magic practitioners or magical creatures of the city. After Revenance, it would seem rather incontrovertible that those things are connected.

Denizens of Atlanta's magical community are under siege and Dakota may be the only one able to stop it, for while she hasn't the first clue about graffiti art, her tattoos are her power, and that combination of art and magic may be similar enough to help her stop whomever is responsible for the growing genocide before the city runs red - not from the graffiti art on the walls and buildings...but from the rivers of blood pouring through the streets.

It's been well over a year since I read the first book in the Skindancer series, Frost Moon. I normally try to reread early books in a series before reading newer releases, but time is tight right now so I decided to rely on the exposition in the narrative of Blood Rock to refresh my memory. That can often be hit-or-miss in books, but it worked out fine in this case. Francis reminds readers of important things from the previous book as it relates to the plot or characters in this one, and he does so in a natural, organic-to-the-story manner that would be enough to inform even new readers without overwhelming or bogging down the pace of the story. I appreciated that.

The first book made me a big fan of the world that Francis created for the series and characters who populate that world. I enjoyed revisiting them in this one. I like Dakota Frost quite a lot, she's smart but fallible and for all that she's great at what she does, she's not some all-powerful megawitch. There are consequences to her actions, limits to her power, and both the consequences and the limits can and often do exact a high price from her and her friends and loved ones. It's one of the most appealing aspects of the series for me...even if it doesn't always make for fun times around Little Five Points.

I'm loathe to seem gender-biased here, but there's a different feel - a slightly different tone - to urban fantasy featuring a female protagonist as written by a male author. I enjoy those nuanced differences on occasion. Of course, as there's only one other ongoing urban fantasy series I read that has the same male author/female protag situation, 'on occasion' is the most I could get anyway. Still, the differences are even more delineated with a female protagonist, and it seems to add more weight to the inherent differences in style across authors' gender lines. I enjoy it.

I can't say, though, that I enjoyed the whole of this book as much as its predecessor. I struggled with the story on a few different levels. The threat of the killer graffiti didn't really work for me for some reason. I couldn't relate to it and it seemed a less tangible threat than the one we see in the first book. And there were points in Dakota's investigation into the source of the graffiti and the core of its magic that I felt my mind wandering. Graffiti - however magically devilish - just seemed like a bunch of urban scrawl to me. The big reveal at the end about the perpetrator/s came out of nowhere and the conflict resolution that engendered seemed a little anti-climactic.

Oddly enough, one of my other issues is that nothing at all went right for Dakota in this book. That certainly can make for a rich and complex multi-layered plot, but in this book I actually got to a point where it felt like I couldn't turn a page without some other, possibly unrelated badness going splat all over her life. I found myself feeling a little depressed by it all on her behalf.

From what I've seen so far between the two books, Francis tends to pack his plots with a lot of action. That's not necessarily a bad thing, but in this case there's never really much room for a reader to catch a breath and very rarely any time to fully develop a scene's intended emotional impact before the narrative races along to the next calamity. That cheated the story out of the sort of expression of emotional response and consequence that would have served a couple of very significant plot points very well.. A tighter grip on the plot and a few less plot threads may have allowed for the remaining points to reach a more satisfying stage of development and resolution that was lacking.

I do truly enjoy the world and characters that Francis has created in this series, and there just can't be enough emphasis placed on how nice it is to get that slightly different flavor of writing from a male author. For me though, this book wasn't as entertaining as the first. Still action-packed, though, still conflict-laden, and it still...always...has Dakota Frost, the best magical tattooist in the Southeast. That's definitely enough to keep me looking out for the next book. 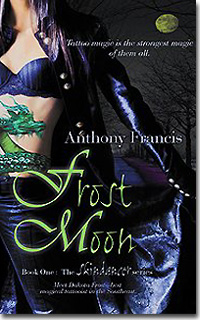 Return to top of Blood Rock