Liked It...But There Are Caveats 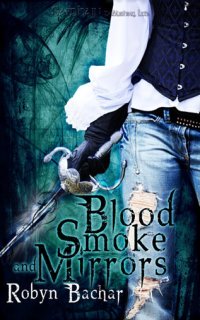 Catherine Baker was harshly sentenced by the witch's council after defending herself from a vicious attack by turning the attacker's evil back on him. It broke his mind. Her actions offended the witch's "An harm it none" creed. She was ostracized from the witches, cast out, and she's still bitter about it. The fact that her boyfriend at the time, the Guardian Lex, was the one that turned her in after she'd confided in him in confidence not only put the kibosh on their relationship, but it shattered all of Cat's dreams of a future with love and family. Needless to say, when Lex shows up years later at the coffee shop where she works, telling her she's going to have to try to become the new Titania (sort of the arcane's answer to a one-witch united nations for the Midwestern US region), Cat quite succinctly tells Lex exactly where to stick his suggestion. Various powers and magical races have a vested interest, however, and soon it becomes clear that refusal is not an option. Especially when Cat finds out that her murderous father Dorian is the only other potential candidate, for the male title of Oberon, left alive and as he's the necromancer responsible for her mother's brutal slaying, Cat's motivations become very pointed.

With a smattering of vampire politics and witchcraft, faerie fashion makeovers, and a life-or-death battle or ten, Robyn Bachar's book, Blood, Smoke and Mirrors is a fun, easy read with a heroine in Cat Baker (true name Morrow, but it's rude to mention that in mixed company) that has enough wit and self deprecating charm to provide some solid tongue-in-cheek humor. Not to mention she slings insults even better than she wields sun spells. For me, Cat was the highlight of the book. There were a few other characters that I enjoyed, Cat's faerie cousins Portia and Tybalt and the very powerful and obscenely rich vampire Zachary Harrison. I can't say, though, that I was overly fond of Lex, who seemed very two dimensional and lacked a lot in charm.

The "romance" between him and Cat never worked for me because I just flat out didn't like him, and there were scenes and issues all the way through to the last page of the book that made me wonder how successful a romance those two characters could really have, despite them being "soul-mates." Cat hasn't ever, and still doesn't feel comfortable in his home, for goodness sake...and she's going to live there? That's not usually a good indicator of snugglebunny love, and I found it so odd (especially considering where that information is given in the book storyline) that I had to reread that passage to make sure I'd read it right.

And actually, that point segues right into those caveats I mentioned. For all that I enjoyed the characters (most of them) and thought Bachar's narrative was smooth and enjoyable, I had some major issues with the actual story part of the...well...story. I thought the world building was very thin and sketchy and the mythos and explanation of different races bare boned to the extreme. I'm still not sure what the difference is between a necromancer and a vampire in Bachar's world, as everyone seemed to differentiate the two but Harrison indicated that vampires find that term offensive and prefer to be called master necromancers. I thought there were several odd transitions in the book, and the first half, centered around Cat's trials for the Titania position was almost a different story altogether from the later half, where she's being coerced into staying with Harrison, and those two parts seemed so disparate that the overall arc of the book didn't totally gel for me.

There were also a few too-quick resolutions and several cases where character action and/or reaction didn't seem organic to the situation, or were too quickly glossed over, and in those cases there was a serious lack of emotional impact. Some of those scenes could've yielded the author a significant payoff in reader emotional response and the opportunity was passed by more than once. I thought the "trial" was surprisingly lacking in challenge and substance considering the position the trial was for, and I have no clearer an grasp on what Harrison's motivations were for doing what he did to and with Cat beyond those he stated, but even that he seemed willing, at one point, to negotiate.

Above and beyond all that, however, the paramount issue is that the idea of Cat as Titania bugs the hell out of me. I have a serious peeve with stories that offer up the least learned, least powerful, least able to defend his/herself person for a sacred position of ultimate value and power. I've read it before in other books, an it annoys me every time, because not only does it call that person's abilities into question, it makes everyone around the poor shlub seem ridiculous, ineffectual, and stupid to want that person in power to begin with, and from a reader's perspective it does a serious number on my ability to suspend disbelief.

Despite all that, though, I do still like Cat and think her story is far from over. At least, I hope it's far from over, because there were sure a lot of unanswered questions and unresolved issues in Cat's life by the end. I'd read a sequel if there's one published, though it'll be the characters more than the plot that draws me back if there's another. I would like to caution potential readers on one thing: this book has been tagged as a paranormal romance, but while there is a romance involved in the story, it's by no means a central part, and I'd place the genre far closer to urban fantasy. Hardcore paranormal romance fans may be disappointed.

Return from Blood, Smoke and Mirrors to Urban Fantasy Genre