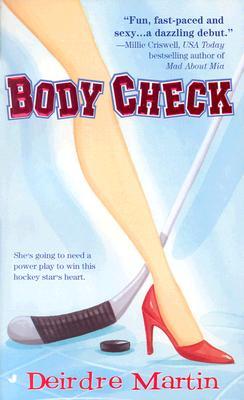 Warning: The following review contains spoilers, language that may not be suitable for all audiences, and several laborious climbs onto a fairly large soapbox. I try to keep the thing locked in my storage shed, but it marched itself out and plopped down right in front of me, refusing to budge until I purged my spleen. Quite a persistent bugger, that soapbox.

The New York Blades have been very, very bad boys.

Turns out that's good news for publicist Janna MacNeil, at least in terms of job security. It's less fortuitous for her peace of mind and stress level, as she's been tasked by the family-friendly corporation that recently purchased the Stanley Cup Champion Blades to clean up their less-than-lily-white reputation. It's a big job, but somebody's gotta do it.

She's just one tiny PR person, and no amount of preparation could have helped her effectively manage team captain and uncharitable lout, Ty Gallagher. No matter how she begs, pleads, cajoles, and blackmails, Ty remains uncooperative and resolute. He kisses no corporate rings. Ever.

Regardless of how well Janna has done with the rest of the team, Ty is the unbendable, unbeatable challenge. He's also unbelievably appealing. As the heat rises between these two contentious warriors the question remains. Will they score big with love or will their broken hearts see them end up in the penalty box?

I love sports romances. They're towards the more archetypal of the contemporary romances and tend to follow predictable formulas on the whole, but they're comforting for all that. They also tend to be light, fun, and sexy as hell, especially those authored by some of the masters of the sub-genre. I've been a huge football fan most of my life, but I like hockey and, though I'd rather watch grass grow that sit through a baseball game and I can't watch basketball because of the squeaky shoes, I still enjoy series that feature sports I don't necessarily favor.

In that regard, Martin's series debut was exactly what I was expecting. It was well written, quickly paced, and chock full of lusty good times. It began well. Janna was a feisty PR tornado and despite some inner insecurities, she went toe-to-toe with the big burly hockey players, especially team captain Ty. It also had a handful of ancillary plot threads that added some nice depth to the plot, though not all of them were as well developed as I would have liked.

Things were less successful for me in other areas. The first was that the bad boys of hockey were more than just bad boys. Womanizing sports stars are just as common in the genre as they are in reality, so are the alcohol abuse and legal issues. Can't read a sports sheet lately without some high paid ball boy having done something either remarkably stupid or utterly reprehensible. In the sports romances I favor, though, the redemption of those wickedly/criminally sinful ways are part and parcel of the plot. In this one, it was not.

And I thought Ty was an overpaid, inflexible, arrogant, selfish, unconscionable asshole.

I had my problems with Janna, too, but I'll get to those in a minute. Ty's unwavering determination to thumb his nose at any sort of corporate compliance was fine...in theory. And if he'd been funding a bunch of charitable causes anonymously or donating his time and promotional material privately, I would've thought he was the bees knees. Problem is, he wasn't.

He gave Janna's little brother a good day and his phone number, and he brought an old lady some tickets. That's it (I refuse to count the debacle dinner). Anything else was unequivocally refused so he wouldn't be seen as kowtowing to management. Well excuse the fuck outta me, there, puck face, but I don't care how adverse you are to kissing a little corporate ass, if you can't deign to offer your precious time to some dying kids or any of a sundry disadvantaged masses, none of whom would even think about the PR angle and most of whom would revere you as a god if you gave them a single smile and an autograph, then you're just a soulless dick. Fictional or not.

Ty never learned that being right and being decent aren't mutually exclusive.

Speaking of decent, Janna fell a little short as well.

I'm going to apologize up front for this one, because I'm feeling a little ranty about it all. If my best friend and roommate comes home from a date with a member of the team with whom I am employed, sporting a few bruises and telling me that her date almost raped her when she wouldn't have sex with him - the same guy who had once tried to pull something similar on me - the last thing I would ever do is docilely stand by while my co-workers blast her reputation in the media and brand her as a money-grubbing cock jockey. I was incensed by Janna's inaction and bemused that Theresa had no problem with her for it. It's not like Janna hadn't already established that her skills were in demand. She could have quit, she could have launched a counter-campaign. She could have stood up for Theresa to her boss. Something.

That Janna did nothing made her more than a shitty friend, it made her complicit in a repugnant example of corporate CYA tactics and furthered vicious rape stereotypes. And I'm sorry, but Ty's team meeting to "handle" the issue (when he finally deigned to have one) seemed completely bizarre to me.

But those weren't even my only issues with the book. I also thought there was a large gap in relationship evolution between the final conflict and the resolution. I saw no epiphany in Ty, no growing change or increased awareness of emotion, just a change of mind and some abrupt decisions that force fed an HEA. And instead of having anything resembling a lovely Jerry Maguire moment when Ty realizes that he's wildly in love with Janna and nothing matters if she can't share it with her, he publicly announces a life-altering decision, then parties all night with his team and doesn't even show up to see Janna until the next day. I wasn't swept away by the romance of it, I was gobsmacked by the whole of it.

There just weren't enough good points in this book to enjoy it, and the bad points offended me too much to ignore them. I was really hoping for a new-to-me sports romance series I could really dig into and relish. If this series debut is any indication, I haven't found that here.