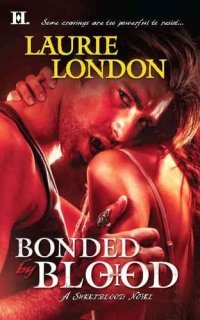 After a battle with rogue Darkbloods leaves him close to death and hiding from the sun in a shaded cemetery, vampire and Guardian enforcer Dominic Serrano catches the scent of both his salvation and his doom. A Sangre Dulce, a human with a rare type of blood craved by his kind, is close to where he's gone to ground and the intoxicating scent is stirring the predator in him into a frenzy. Feeding on a Sangre Dulce is forbidden - the threat to the human's life too great to risk even if he were at his most controlled. In his wounded and half-starved state, there is truly no chance he can spare her.

Scouting movie locations for television and movie productions is one of Mackenzie Foster-Shaw's jobs. It puts her out in the field and has made her very familiar with the Pacific Northwest she calls home. After two weeks of haunting cemeteries near and far for her current client, she's finally found one that may meet her picky client's needs. As she sets up her equipment and starts photographing the site, she's startled by the sound of distress coming from under a pile of forest debris. Moving closer to investigate, Kenzie is shocked to find not an animal, but a man. An obviously wounded man in dire need of help.

It isn't until he lunges at her that she realizes an insane truth. He's not a man at all.

Waking up at home the next morning with no idea how she got there or what happened to her the previous afternoon, Kenzie is confused and concerned. She feels weird, first of all. There is a buzzing in her head, like static, and a strange feeling in her chest. She wonders if it has something to do with her family's curse. The Shaw family has been plagued with mysterious disappearances going back generations. Her own father disappeared, then a few years later, a cousin. Maybe what's happening to her is somehow a precursor of that horror.

Kenzie has no idea how horrifying the truth can be, but with one vampire intent on keeping her safe - even from himself - and an entire contingent of Darkbloods working on just the opposite, one thing is certain. She's going to find out.

I liked this series debut. London has a fluid, easy-to-read writing style, and the world she's creating is brushed with creativity and a bit of originality that adds a breath of fresh air to vampire-featured paranormal romance. The Guardian enforcers were a particular treat. Their presence and purpose added a covert ops military unit feel to their aspects of the story that I found appealing and thought a surprisingly nice blend with the vampire history and culture that London introduces.

Both main characters were likable and their individual backstories were fleshed out nicely and incorporated into their character development. They were not, perhaps, the most individual, unique, or remarkable hero and heroine I've ever read, but they fit well in their roles in the book and they did their job as the lead romantic pair. Neither of them annoyed or offended in any way - always a plus.

As a couple Kenzie and Dom had a solid amount of chemistry, and some of their scenes were hot enough to singe my fingers on the page (always a good thing), but I was a little thrown by how deep into the book I was before Kenzie is clued in on the existence of vampires. Half of the book is gone before she finds out they're large, in charge, and closer than she knows. In books such as this, where the heroine isn't aware that the guy she's lusting on isn't human, I struggle with my level of comfort with the relationship. It's hard for me to fully commit to a romance based on that sort of lack of information. Because of that, the emotional connection between Kenzie and Dom frustrated me a little for longer than I would have liked when I was reading it.

On a brighter note, I thought there was a nice balance between the world-building, the progression of the external plot conflict, and the evolution of the relationship between Dom and Kenzie. Too often lately I've read books that skew more heavily one way or the other to the expense of all three. Some of the elements could have had more thorough definition for my taste, but what's there combined well and worked together to create a satisfying story instead of detracting from it. The external plot conflict with the Darkbloods also added lots of great action into the mix.

The sum of all the parts of this book is what made this read work so well for me. It didn't have the same tired feel as so many in the genre have of late. London stirred her overlarge palette of romance standards and original story elements, then combined them in such a way that she created a surprisingly harmonious blend of comforting familiarity and exciting originality. I really enjoyed what I read and look forward to continuing the series.

"Friends don't let friends show up at devastatingly gorgeous men's homes without a warning. What if I had gone to the gym first and was all sweaty and stinky? Did you ever think about that?"

"But it's the principle."

Return from Bonded by Blood to Paranormal Romance

Return from Bonded by Blood to OGBDA Book Review Home