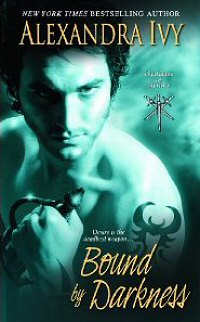 Disclosure:   This rating, review, & all included thoughts & comments are my own.

He had kidnapped her. Unloaded her unconscious body in the decimated halls of his deposed master, the vicious Morgana le Fey. Once he had her secured beyond the mists in Avalon he chained her with silver - protecting her delectable skin, of course - and waited. She is Jaelyn, a vampire, one of their feared Hunters.

Ariyal chose not to look too closely at his reasons for taking her. That way lies madness. Instead, he's going to punish her for his interest and torment her a bit. After all, he blames her for his failure to stop the Dark Lord. It's only fair he exact a little retribution...before he tracks down his brother and continues the distasteful task he started.

He has to kill the child born to be the reincarnation of the Dark Lord or it will be the end of the world as all know it.

Regaining consciousness chained up in a strange place with a Sylvermyst bastard looming over her isn't exactly the highlight of Jaelyn's long life. Oh sure, the bare-chested bastard is gorgeous. Lovely eye candy. And if she wasn't a Hunter, immune to his fine-bodied charm, she might have been worried. Instead, all she wants to do is sink her fangs into the fiend and show him what a Hunter like her can really do.

And she means that in the most painful and deadly way. Really.

She's definitely not going to let Ariyal continue with his heinous plan. She'll find a way to stop him from killing that child. But when an Oracle pops up and suddenly changes the nature of the contract between her and the Consortium, she can't help but wonder what in the hell is in store for both her and the Sylvermyst.

Bringing him in is one thing, but sticking by his side - even helping him - given how he affects her, may be more dangerous to Jaelyn than anything else she's ever faced. And riskier than facing the Dark Lord himself.

Just before I started reading this installment of Ivy's popular Guardians of Eternity series, I checked to see when I'd read its predecessor. I was a little surprised it had been over a year and a half and a little concerned that I'd have a hard time slipping back into the series after so long.

Thankfully, that wasn't the case. Ivy did a decent job with the series exposition, weaving it in with the book's story arc in a way that reminded me of what went before even as the current plotline progressed. While I don't think this book would work well as a stand-alone, or as a starting point for interested readers unfamiliar with the series, it worked just fine for me.

As much as I read, there are surprisingly few series that hold my attention as long as this one has. The world that Ivy's created here may not be the most expansively detailed, nor are the plotlines all that complex, but each book offers a sexy, fun, action-packed read with wonderful dashes of snarky humor liberally sprinkled throughout. There is also a wealth of originality in the world and mythos, and that keeps the series from feeling like just another incarnation of the paranormal romance genre masters.

I liked Ariyal and Jaelyn as characters. Ariyal is a gorgeous, sexy alpha male who's had it very rough in the past. He bears the brunt of the responsibility for the future of his people and feels the pain of his brother's betrayal. Jaelyn is a gorgeous female warrior, cold and deadly because she's had to be, threatened by the fiery heat of her attraction to Ariyal because the cost of feeling for him is too high.

He's insouciant and sardonic, she's chilly and quick to bare her fangs or reach for her shotgun. It was fun seeing them evolve and grow closer despite themselves as they were forced to work together, and the chemistry between them was top-notch.

There was a nice balance in the shifting points of view in this book, too. As the threat of the Dark Lord continues to grow, important characters from earlier books, as well as a few new characters, have significant secondary character roles in this one. I'm a big fan of Styx, and Ivy made me a Salvatore convert with his book, and their increased presence served both the arc of the series and the storyline of this book quite well. And I appreciated very much that Ivy didn't shortchange the romance between Ariyal and Jaelyn while including them.

Then there's Levet. It just wouldn't be a Guardians of Eternity book without Levet. I love that little fairy-winged, French-spouting, magic-exploding gargoyle.

This series may fall closer to the brain candy end of the spectrum than the series I favor for their dark, detailed, complex worlds and angsty, deadly romances, but sometimes I just don't want to work that hard to enjoy a read. I trust Ivy to entertain me and raise my temperature. The male characters are sexy and powerful, the female characters are strong and independent, and the stories have been adding depth and dimension as the series has progressed. For all of that I'm still reading, still enjoying, and plan to continue to do so.

Return from Bound by Darkness to Paranormal Romance

Return from Bound by Darkness to One Good Book Home