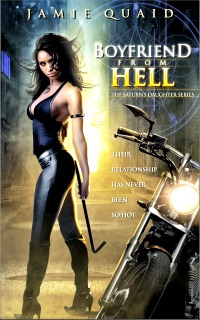 Disclosure:   An ARC of this book was provided to me by Pocket Books publisher Simon & Schuster via Edelweiss. This rating, review, and all included thoughts and comments are my own.

The only thing that scarred, limping, and mousy Justine Clancy wants to do is pass her law school finals and get her degree. Maybe then she can quit her part-time job in the radioactive area of Baltimore known as the Zone. Not that the Zone, altered by a series of chemical spills a decade ago, doesn't have its inherent charms. I does. It's just...those charms tend to seem more like freaky mutations or flat-out oddities to the uninitiated.

For two years Tina has worked for the sexy if ego-endowed Andre Legrande, keeping the books for the enigmatic man's many business holdings. She's gotten as used to the Zone as any normal person could, though she does avoid it at night. Still, after all that time Tina thought she'd seen all the weirdness the Zone could dish out. She thought nothing could surprise her anymore.

Then she witnesses a government car mow down a bunch of teenagers in a crosswalk without so much as tapping the break, she has the bank deposit she's carrying stolen by an invisible assailant, and she barely survives when her boyfriend Max, driving her own damn car, almost runs her down - seemingly on purpose. Sure, they had a fight and she was ticked off at him, but vehicular homicide is just overkill. Literally.

Just before Max puts a painfully permanent end on a very bad day, Tina's panic and anger lashes out and she damns him for his actions. Damns him straight to hell.

And okay, it's the Zone, but come on. She didn't expect to actually send him there.

Quaid kicks off her series debut with a fascinating, quirky world that reminds me - in spirit, at the least - of Simon Green's Nightside series. That series forever endeared me to books set in those pockets of peculiarity, be they magical or paranormal in nature...or caused by toxic spillage, in which inhabitants are a different sort of breed entirely from "normals" even though they exist practically side by side. The Zone is just such a pocket.

I wish that the storyline had allowed for more depth in the world building and even more Zone weirdness, as those were my favorite elements in the book. It was almost a disappointment when Tina's sudden ability to banish annoying bastards turned out to be an issue of heritage, not radioactivity.

Don't get me wrong, I thought Tina's woo-woo stuff was unique and completely original. I think it's a nifty idea for personal weirdness, and the potential for crazy in it was great. I do wish it had been slightly better defined and explained, though. The whole Saturn's Daughter thing remained a bit too much of a mystery throughout the book given that so much else was going on around Tina. It had the unfortunate overall effect of muddying some of the plot threads for me, especially in the middle of the book.

I wasn't totally sold on Tina as the heroine, either. As much as I enjoyed her sarcastic, in-your-face, jaded awareness in the earliest chapters, she waffled back and forth between that and a willful disbelief about Max as the storyline progressed, despite some compelling evidence. It got a little tedious hearing her claim again and again that Max was a figment of her imagination. Especially as she easily acknowledges invisible thieves and Lady Justice statues that wink at her when she walks by. I would have thought her ability to embrace the surreal would be more advanced.

What I did like was the concept of a heroine who is all about justice. The Zone and its inhabitants, especially Andre Legrande, are steeped in the sort of shades of gray that make the idea of black versus white seem positively adolescent. The ethical issues inherent in Tina's natural ability seem perfectly suited for that sort of environment.

Andre is his own enigma. There definitely wasn't enough of him in the book, he stole every single scene he was in, and the questions about his character and backstory teased my mind long after I set the book down. He's a rather odd chap, really. Not quite an antihero, but he doesn't work on the side of angels, either. Tina's ambivalence to his less-than-pristine character was a lot of fun, and I'm hoping for some relationship evolution for the two of them.

I would have liked a few more of my questions about Saturn's daughters answered in this book, and I wouldn't have quibbled over a more linear external conflict. The Bad Guy was fairly straightforward, but I was a bit unclear on why Tina was considered such a loose thread. I just didn't think there was enough of an established connection between Max and Tina to warrant the Bad Guy's intent in making Tina dead.

This one wasn't a complete win for me as a reader, but there was definitely enough solid writing and intriguing story to appeal. In general I felt the story ended on a stronger note than it began, and I liked Tina much more at the end than I had even in the middle. That, coupled with a definite an air of originality and a wicked twist or three speaks loudly for the potential of this series. A potential I don't want to miss seeing realized.

"Men scratch their bellies and speak gibberish and would still be swinging from trees if we lived in jungles. They probably wouldn't bathe and would still be picking nits, too, except the ones with small weenies learned they could make money to compete in the testosterone wars and civilization happened."

"Having a bad day?" Andre taunted. "Doesn't your best - and only - boss deserve at the very least a cheery greeting?"

"I'm having a bad life, and cheery gets you killed around here."

Return from Boyfriend from Hell to Urban Fantasy

Return from Boyfriend from Hell to One Good Book Home