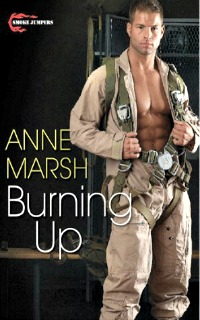 Disclosure:   An ARC of this book was provided to me for review.

The last thing smoke jumper Jack Donovan wants to do during an active fire season is ground his team and return to the small town he left ten years ago, but the phone call he receives one afternoon takes the options out of his hands. He may not be happy about it, but Jack cares too much to ignore the request from the woman who took him and his brothers into her home when they were children, then made them her own.

And when Nonna mentions the fires that have sprung up around the tiny town of Strong, fires that are too frequent and too controlled to be caused by anything natural, Jack does what any responsible son does. He goes home.

He's not back a day before Jack realizes that all is not right in Strong. The fires are more than just suspicious in origin, they are also occurring in a very definite pattern. One that surrounds a small farmstead under new ownership. When Jack finds out the name of the new owner, he realizes that this summer is going to burn hotter than any raging wildfire - and be just as dangerous.

Lily Cortez is back in Strong, the same Lily who haunts his memories, even after ten years. The Lily that he kissed the night before he put his hometown in his rearview mirror. And she seems to be the target of an arsonist.

Even as the battle in him rages between concern for her safety and trepidation about his control, he can still feel the press of her lips against his, remember the fit of her body to his. And in dreams and memories, he still tastes his need for her on his tongue. Seeing Lily again will leave Jack with not one doubt that this summer's fire season is going to be one for the record books. In all sorts of ways.

As soon as I read the blurb for this book I wanted to get my hands on it. A romantic suspense series is always a good bet for me, but one that features smoke jumpers? Hell yeah, now that's a veritable cornucopia of hot, alpha male goodness. That's like...firemen times four on the Sexy Meter. I was all in.

And before I make it sound like I was totally disappointed by the reality of this series debut, I have to admit, there was plenty of smoking-hot sexiness and alpha-male yumminess to be enjoyed. There were also a couple of great scenes in which the smoke jumpers were doing their thing against raging wildfires, and those were as chilling as they were deadly hot (the not-fun kind). I certainly have a whole new respect for anyone craz....er...dedicated enough to tackle that as a career.

I also had, though, a few pretty big issues with the story. I was never too keen about Jack as the lead character, first of all. He was sexy, yes, and had that whole bad boy thing going for him, sure, but I didn't like him all that much, either. Especially at the start of the book.

When we meet him he's annoyed and feeling put-out, wishing that he hadn't taken the phone call from Nonna because he feels his job is way more important than any piddly issues the town of Strong could possible have. His attitude, frankly, rubbed me all sorts of wrong ways. Then we find out that not only is Nonna the only mother he's ever known, but the man on whose behalf she's calling is the closest he's ever come to an uncle...yet Jack has not once deigned to visit either of them in the ten years since he left town. Even this time he seriously begrudges returning to a town that he seems to hate (for no good reason I could ever figure).

Yeah, at that point the first impressions weren't painting him as my kind of romantic hero. And it got worse before it got better.

Fortunately, there was Lily. And though there were times I questioned some of the actions she took and felt that some of her reactions to the Bad Guy seemed a bit off for someone as strong as she appears to be, I liked who she was as a person quite a lot. I loved that she went toe-to-toe with Jack more than once, thought she was fabulous when she was furious, and felt she handles Jack's return to her life with appealingly adult sensibility.

She was certainly more sympathetic and easier to relate to than Jack, especially at the beginning.

Another bone of contention I had was in the narrative. Most notable in the first half but present throughout, there was quite a bit of repetition that over-emphasized plot points and story elements. It got tedious. Jack and Lily's history was mentioned many, many times, Jack's determination to leave town at summer's end came up over and over, and I didn't need to be told Jack didn't like having walls around him quite as often as I was (though it would've been nice to find out the hows and whys of that phobia). Those and several other points were hashed and rehashed, and it cost the story the page space that could have been better served adding complexity and depth to the plot of both the romance arc and the Bad Guy's story threads.

Some contradictions in the story and a few minor holes in the plot were also troubling, though I enjoyed the concept behind the Bad Guy. Marsh handled the psychology of his character and the escalation of violence both consistently and believably. I wish he'd had a larger role in the storyline, because he posed a serious and significant threat to the characters, one that I would have enjoyed seeing expanded further.

I wish the characters had been better developed and fleshed out more than they were. I don't think there was enough detail provided about Jack's past, and I don't think the secondary characters had a large enough role in the tale. It seemed like as soon as Jack locked eyes on Lily again he didn't stray far, and Nonna, Ben, even his brothers almost completely ceased to exist for most of the story. None of that made the story or the characters feel particularly well-rounded.

For all those issues, though, Jack grew on me later in the book and I liked him with Lily. The fire scenes were handled well and the stalker/arsonist was dangerous and grimly entertaining. Other than the repetition, always a hot button of mine, the book wasn't a bad read. It just wasn't complex enough in story or character to be consistently entertaining. I'd have to think hard about continuing the series, because the super-hot smoke jumpers just weren't enough for me in this one.

Well, I must say the cover is quite evocative.

*Laughs* Isn't it just?? I do have to give my complete appreciation to whomever is responsible for that cover.

Return from Burning Up to Romantic Suspense

Return from Burning Up to OGBDA Book Review Home