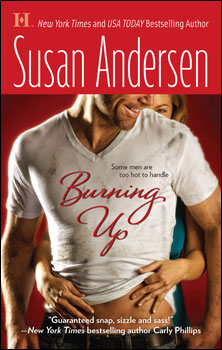 Macy O'James has made a name for herself starring in music videos in L.A. Now she's returning to the small town of Sugarville, a place where the name she made was far less flattering back when she was in high school. Tormented by the "in" crowd, her reputation was shattered when her high school crush turned out to be a lying bag of bollocks and told everyone she was easy after she put a halt to his advances. As if being labeled the school slut wasn't bad enough, an accident that ended the football dreams of three top players on their team took her from school slut to town pariah. Macy's gotten very good at protecting herself from slings and arrows, but when her cousin is struck in a hit-and-run and Macy races home to help take care of her, she isn't certain that her ability to keep the nasty at arms length will be able to stand up to an extended trip to the only home she's ever really known, even ten years after she had originally left.

Relatively new in town, Sugarville fire chief Gabriel Donovan had heard the rumors about Macy O'James. The mix of L.A. celebrity and small town least-liked didn't leave him with much of an impression - until she blew into town and set every one of his personal fires to burning at incendiary levels. The beauty was definitely weird, with her costumes and insouciance, and flagrantly flirty with everything male on top of that, and for some reason, the combination riled him like nothing else. Suddenly he was mouthing off at her over the least provocation - and that woman does provocation like nobody's business - and his vaunted control was left in tatters. It didn't take long, though, for him to see that there was more to Macy than public opinion, and behind those costumes and that carefree front lay the heart of a woman who loved fiercely and took a bone-deep joy in life.

And that was when those fires Macy O'James set to burning inside him went supernova.

Susan Andersen's light contemporary romance thoroughly entertained me on a lot of levels. I loved the characters and their back-and-forth banter was some of the best I've read lately. The chemistry between Macy and Gabe was positively stunning and it exploded off the pages. I'll admit, I have a preference for the adversaries-to-lovers theme in romance, so I was predisposed to much of my enjoyment and satisfaction with the book, but beyond that, Andersen created two perfectly suited characters and slammed them against one another in delightfully heated ways.

And it was more than their dialogue I enjoyed. I was pleasantly surprised by the depth of character they each had. Macy in particular struck me as a solid, fully realized, and sympathetic character. Her outrageous actions and devil-may-care attitude were fun to witness, and while in the story they hid her softer vulnerability and the evidence of years of hurt from her world, that side of her character was nicely revealed to readers. There was also an inherent honesty to her nature and a willingness to admit fault that was appealing. She truly did shine when town pressures didn't slow her down, and when they did, her reactions were believable and realistic and, I thought, very well written.

The plot zipped along quickly with a fast-flowing and smooth narrative, and beyond Macy's town issues and the romance with Gabe, Andersen included an ancillary plot thread about a town arsonist that added necessary dimension to Gabe's character and balanced out the overall plot of the book nicely. Macy's issues with her old rivals were well done. It worked for me, though some could complain that after ten years, some of the people's reactions to Macy were implausible, but because of the small town setting I found it very believable. The longest memories and the most closely held grudges can always be found in small towns.

As for the romance and sexual aspects of the book? Well...let's just say I'm still fanning myself and leave it at that.

This was a fast, light read that had a bit more genuine meat to it than I was expecting. There were a couple of scenes that I thought were a bit implausible, like the public attack at the reunion that ended in a bit of a Kumbaya moment, and the tertiary romance between Grace and Jack that was woven into the storyline was more of a distraction than an enjoyment because of the very ancillary nature of Grace as a character, but I was completely entertained by this sizzling, fun book. A special kudos for the plot twist at the end. I didn't see that one coming at all - and I usually do.

I don't know that I've read anything by Susan Andersen before this, and if I have, it's been several years. I think Burning Up may just have corrected that grievous oversight for me. I love it when that happens.

Return from Burning Up to Contemporary Romance

Return from Burning Up to One Good Book Home