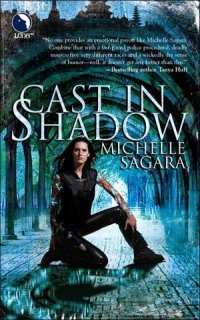 She is a Hawk, one of the three branches of the Lords of Law for the city of Elantra. The branch most adept at solving crimes in the city, though members of the other two may disagree. Regardless, Kaylin Neya has been a Hawk for seven years.

And now the murders have started again in Nightshade.

The Hawklord has put her on the case because of her familiarity with the fiefs. Also because of the marks on her arms, she's sure. She won't, however, be investigating alone. With her will be a member of the Dragon caste, Tiamaris, a learned male familiar with Nightshade and more than familiar with the string of murders in the past. Also at her side will be Severn Handred, new Hawk and former Shadow Wolf. Also formerly of Nightshade.

But those are pitifully few words to describe Severn. There are none that fully encapsulate the man or their past. The rage that he incites in Kaylin is only held in check by the slimmest of margins, but ending the ritualistic homicides and catching the serial killer who is marking and slaughtering children in her old stomping ground takes precedence. She has no illusions. She'll need Severn, Tiamaris, and a whole lot of luck, to have any hope of doing so.

I'm a little late in starting the Chronicles of Elantra series, but now that I have, I'll definitely be sticking with it. This series opener was a hell of a read. Sagara introduces her complex and layered world with an intense, plot-driven story, a heroine with a pitch-perfect blend of strengths and weaknesses that appealed, and a fabulously diverse cast of secondary and ancillary characters. I got dragged into the melee that is Kaylin's life and was swept away by it all.

I have to admit, there's a lot of information to absorb. Sagara doesn't hold back when sketching out a pretty large and comprehensive world full of several different races, their diverse traits and cultures, and a surprising number of unique and complex characters. Secondary and ancillary characters included. Throw in an intense and sometimes painful plotline full of mystery, danger, and action, and all the sundry details surrounding it, and you've got a book that requires you to keep a lot in your head as you go along.

Personally, I enjoyed it. It was a lot, yes, but I really liked how Sagara blended the world-building and story. There wasn't a bunch of exposition front-loaded in the book, or doled out in a quagmire of info dumps that slowed down the pacing. Instead the world was introduced and fleshed out, and the various characters and cultures explained and expanded in bits and pieces as they pertained to the storyline as the story evolves. It was nicely done and provided a lavishly authentic world of vibrant depth and dimension.

Kaylin was a delight for me. I'm not always easy on my heroines, I know. I'm picky. Kaylin, however, was a very endearing mix of curiosities, confusions, and competency. She was a hot mess in some areas, a soft touch in others, and always she was full of gritty determination with a passion for justice. She's a haunted girl, sure, but also a fearless Hawk and a dedicated young woman.

There are moments when she's not the most mature character (by far), the smartest, or the most patient. Lots and lots of moments. Just about every moment, actually. But instead of that annoying me as it has with other fantasy and urban fantasy heroines in the past, Sagara uses Kaylin's flaws to help define her and make her believable. She tends towards insubordination, is physically incapable of being on time for anything (I can relate to that), and she isn't the most educated kid in class by far, but she has a gift for grasping obscure connections and seeing intricate truths. She's unpolished and unvarnished, streetwise, and loyal to a fault. She's not stupid, she's no one's damnsel in distress, and she'd likely kick the ass of anyone who suggested such a thing.

I sorta loved her a little.

I also loved her and Tiamaris and Severn together. They were fabulous fun, and the contentious history between Severn and Kaylin packed a powerful punch once revealed, one that added a tension to their relationship that was keenly felt throughout the book.

There's no romance here, per se. Not at this point. The vibe was such that it will probably happen some time in the future, but after everything that happened seven years ago, I have to be honest, I don't think I would have been ready for something to develop between Kaylin and Severn. That's a lot of baggage. For both of them. And much needs to be healed between them first.

The narrative of this story has a couple of quirks that bear mentioning. Many of the conversations and informational scenes are written with a wealth of subtext, allusion, and half-spoken truths versus the more traditional plainly stated ideas, thoughts, and actions. That can be frustrating as hell when you feel like a bunch of stuff is flying over your head in what should be a simple conversation. Oddly enough, in this book and this world, it worked for me. It seemed to fit the characters and the situations and added a layer of intensity to the intrigue that kept building throughout the book. I just didn't mind biding my time until things were made clear.

Without doubt, this series debut excited me. There's so much there, and because of everything it contained, it's easy to imagine limitless possibilities for subsequent books. Of course, that's the bright spot to being so late in starting this series. There are plenty of books to read before I'm caught up, so all that potential is just a few clicks away. I have to admit, that's a pretty sweet consolation for my tardiness. I can't wait.

"History is not our guide, it is not our friend. It is a passing stranger, one which shadows legend, sprinkling it with the seeds of truth."

Return from Cast in Shadow to Genres

Return from Cast in Shadow to OGBDA Book Reviews Home