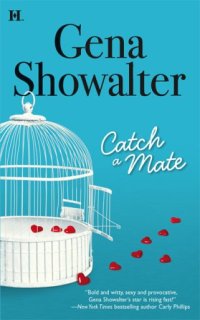 If you like your romantic comedy with vicious verbal battles and wicked word wars between the leads, then look no further than Showalter's Catch a Mate. Jillian and Marcus have both been hurt in the past by unfaithful people and they both work in the slightly shady world of disclosure, where they act as bait to lure the spouses and lovers of suspicious wives, husbands, boyfriends, and girlfriends who think their significant other is cheating on them. While their jobs may be a perfect fit for their jaundiced hearts, it's starting to damage their cooling, bitter souls, but when one self-professed man-hater and one man who thinks all women fall into three nasty categories go head to head the sparks start to fly, the insults sling, and the arousal spikes out of control. When waspish, barbed comments are foreplay and the lines between hate and lust blur, watch out, because much hilarity ensues.

While this is a delightful romp and should by no means be taken seriously, I surely wouldn't recommend this book to anyone who's uncomfortable with or dislikes a lot of smack talking between their romantic leads, because the sweet scenes are few and far between in Catch a Mate. This is a book that isn't for everyone, I don't think, but I had no problem with it at all and I thought it was a riot. Sure it's a bit predictable, and sure both lead characters act like immature and spiteful children at times (Lillian more than Marcus), but it's a brain candy book that's supposed to be brain candy and doesn't aspire to much beyond that. This is chick lit romantic comedy to the nth power and that's something at which Showalter excels. Personally, I would have enjoyed the book a little more if there hadn't been the threads of serious issues, issues like Jillian's obviously mentally ill mother and the deeply traumatic scars from her childhood. Like her best friend Georgia's borderline-pathological self esteem and love issues. I also would have preferred a slightly more diverse book, a book that included more of the ancillary characters - Marcus' friends/male bait and the women at CAM. And Jake desperately needs his own book. He deserves it.

I will say the one thing about Catch a Mate that did really bother me was a scene at the end where Marcus is called to Jake's place. The ensuing scene was short and abrupt, and honestly, had their been more time and attention given to it, I think it would've raised Catch a Mate from a four to a five star read for me, because that moment in a romantic comedy is always the paramount moment. It was a little too quick and abrupt for me to really revel in it. Still, I did very much enjoy this read. Showalter didn't disappoint.

Return from Catch a Mate to Contemporary Romance

Return from Catch a Mate to One Good Book Home