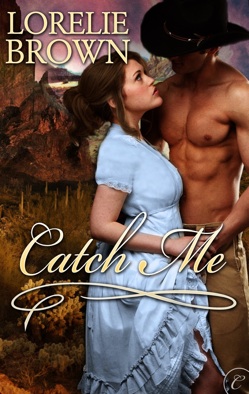 There's nothing Maggie Bullock wouldn't do to save her father's life. That's why she walked into the bank in Fresh Springs, Arizona. The first time was to beg bank owner Willheim Masterson for a loan to provide the money for her father's medical care. The second was to take what that slimy bastard wouldn't give her, despite the years of loyal friendship between Masterson and her father. With nothing but a gun and determination the twenty-two-year-old robbed the bank.

Dean Collier didn't much like Masterson when he offered him the bounty on Maggie Bullock, but Dean figures he doesn't have to like the man. He needs the job that Masterson is offering in exchange for catching Bullock. It may just be his last shot at redemption. And really, how hard could it be to catch a woman who fancied herself a bank robber?

Turns out that was the wrong question. Catching Maggie wasn't a problem at all. She took the money straight to her father's medical care facility in Texas, just as he thought she would. Holding onto her once he caught the little hellcat, on the other hand, may just be the death of him. And the long journey back to Fresh Springs once he has the beautiful, stubborn, willful woman in hand could very well send him to hell - or offer him a heaven he'd never anticipated.

This nifty historical romance was a lot more fun than I was anticipating. I'm usually not too keen on books set in the west, nor am I an avid historical romance reader, but Brown kept me entertained with two characters who were very likable. Maggie is right up my alley for heroines. She was feisty, wily, passionate about her beliefs, and willing to do anything for those she loves. She robs a bank in the Arizona Territory in 1882 - that takes some major stones. Then she makes it from Arizona to the sanitarium in Texas where her father was being tended, alone in the back country and in a time period where that couldn't have been easy. She had a truly indomitable spirit that I admired and I found very sympathetic.

Dean was a bit of the tortured hero, complex and broody. He's lived through hell and carries around a lot of emotional baggage. As a bounty hunter, the blood of men are on his hands, but it's the weight of failure and a line he crossed that stains his soul. One of the things that Brown did particularly well with his character is create a man who not only desperately needed a woman like Maggie in his life, but one who could really appreciate Maggie's nature without stifling it. The two fit very well together and it made for very fun reading.

Aside from the chemistry and suitability between the lead characters, Brown also provided a well-paced plot that had quite a lot of action and just enough humor to keep it interesting. The storyline could have dragged for me, or felt very two dimensional on the long ride back to Arizona, but the addition Dean's brother and a few ancillary characters kept that from happening. My only preference would have been for more of Masterson's shenanigans to have been sprinkled a little more liberally throughout the book to add more of the external conflict to the plot, because that part did seem a little overbalanced at the beginning and end of the book and too much of the relationship conflict rested solely on whether or not Dean would do his sworn duty.

I don't think Catch Me is going to offer readers much in the way of surprises in either plot or characters, but it definitely offers steady, solid storytelling and characters who were genuinely made for each other. I can't speak on the authenticity of the historical era, but it certainly felt genuine, and there were some nice touches and details in scenery and action that seemed like the real deal. The language struck me as a bit more modern than I would have expected in some places, but again, I have no clue if the terminology in question was historically accurate or not. It's not an issue that concerns me too much one way or the other, so it wasn't a detractor.

I'd love to read more from Brown, especially to get a peak at what made Dean's brother tick. I liked him a lot and there was definitely a lot of untold story in his character's history. And if he gets a book, I hope we get another glimpse at Dean and Maggie in it. I fell for them pretty hard and would love to see how their lives progress.

Return to top of Catch Me