Not Bad At All 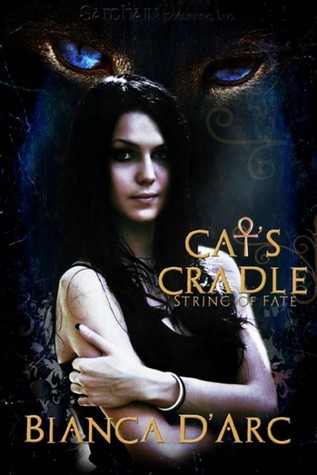 Cat's Cradle was my first foray into Bianca D'Arc's works, and I don't think it was a bad place to start, really. As shifter-themed paranormal romance goes, it has a wide and varied world that perhaps wasn't totally fleshed out in this book, but I certainly got the sense that the author has it fully realized, instead of developing it as she goes. I'm perfectly okay allowing world definition to clarify and build through the arc of a series, in fact preferring it to having it all in the first book, when it can bog down the flow and pace of a story. I also have to give D'Arc credit for managing to give her readers a female lead that is smart, capable, and secure in her abilities, while also willing to adapt to new circumstances and challenge herself without being a bitch about it, or bitter, or hardened. That was refreshing.

Ellie is a nurse and a green belt jiu jitsu who can take care of herself, yet still has room in her heart for the uber-Alpha pantera noir Cade, and when they run into each other - literally - one night while Ellie hurries away from a curious encounter with her shihan (jiu jitsu master), neither lives will be the same and their meeting may indeed be the catalyst (no pun intended) for change in both their races.

I liked this book - though perhaps not as much as I'd hoped. I was thrilled to have a lead couple with the ability to actually discuss their issues, instead of lurking behind layers of insecurities. I can't tell you the last time I read a paranormal romance that had that. Unfortunately, too much of a good thing is too much of a good thing, because Ellie and Cade actually over-talked in several places, when action would've been better served, or when it was just unnecessary. I think that hampered Cade's character more than Ellie's, though, because he seemed a little too in touch with exactly what he wanted and needed in a mate at all times. He was a wee bit too perfect in that regard. I'm probably being picky, but no big strong tough guy dealing with a potential cross-race mating living in a culture that doesn't take cross-race matings well is that well centered.

The other critical issues I had are two-fold - there were some errors (wrong name for a character, wrong gender usage, formatting issues at the beginning) of a technical nature and there were narrative issues. As I was reading, I noticed an almost choppy feel to the flow - like instead of wending together plot conflict and relationship evolution, the story focused on one...then the other...then back again, and that was a major distraction at one point in particular when Cade and Ellie are enjoying themselves for a whole day. I'm all for the enjoyment, believe me, but it went on for so long that the arc of the conflict got lost. When it picked up again, it was jarring and I had to think to remember what was going on around them. I also had some minor issues with the dialogue between characters. In some places it seemed a bit unnatural and stilted. Not all through the book, by any means, but on more than one occasion.

Overall, I liked the world, I liked the concept of the conflict very much, and I liked the leads, but the execution had some problems that dropped my rating down a little. I'd recommend for serious paranormal romance junkies with a blind eye for technical writing issues.

Return from One and Only to Paranormal Romance Genre

Return from One and Only to OGBDA Book Reviews Home