The Guardians' League Series Is So Very Good 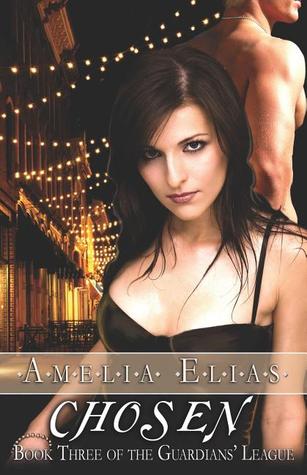 Amelia Elias has penned three books in the Guardians' League series (Hunted, Outcast, and Chosen) and I can only hope that there will be more - I would especially enjoy Ronin's story. I was incredibly surprised when I started out with Hunted. I don't know what I was expecting...well, okay, I do - and admittedly I was jaded by years of disappointment in books from less commercially credited authors. I expected a mediocre (at best) paranormal romance with probably a bit more eroticism than I'd find in mass market paperback titles. What I got was an intriguing, interesting read with characters I truly enjoyed and a story I wanted to see continue.

So continue I did, to Outcast (which was extremely original when it was originally published, but there's been a best selling author that has similar major plot points and themes since then), then, after again being remarkably impressed, went ahead and got Chosen.

Chosen is the story of Gareth Ambrocio, patriarch of the Arachnid clan and Guardian Extraordinaire...who also enjoys leading vampire tours around his territory of New Orleans. While visiting a clan member at a bar, he runs into Alexa, a delightfully shy and rather innocent dhampyr...who has been dared and guilted and pushed into the rash action of commandeering Gareth for a body shot during the wild bachelorette party of a friend of hers. And Gareth, the big bad predator, is determined to keep her.

Gareth's story is full of humor and fun, and Gareth himself is a significantly lighter personality than Diego (Hunted) and Eli (Outcast). I enjoyed Alexa...even when she's stubbornly refusing to believe that vampires exist beyond all rational proof that they do. I also enjoyed seeing some of the old friends from the previous books.

Don't think of Elias' Guardians' League series as just another formulaic paranormal romance series. It's not just a mimicry of others' works. It's fantastic, has its own aspects of originality, and in some ways, is better than others in the genre. Only two facts are keeping these books from a five star rating for me: it's not the most original premise for the arc of the series and it's not as deeply plotted and layered as some of the masters of the sub-genre. I would like to say (again) that I truly hope that Elias plans to continue the Guardians' League series after Chosen. If she doesn't, it will be a grievous short-change for readers who enjoy quality paranormal romance.