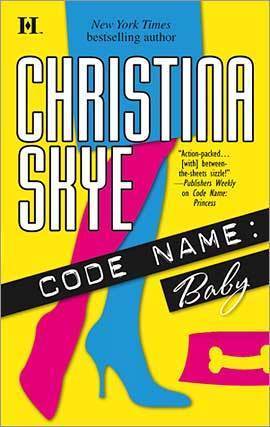 Kit O'Holloran is a renowned dog trainer. She's currently working with four exceptional young dogs on her ranch in New Mexico. The pups are more exceptional than Kit realizes, though. Genetically and technologically enhanced superdogs, they're slated to be the next cutting edge weapons of the special Foxfire military unit. They're highly valuable and at the top of the top secret pile.

One of Foxfire's top operatives, he's just as technologically and genetically enhanced as the dogs and his skills far exceed normal human parameters. He's Kit's brother's best friend and he grew up with Kit, even spent some time living at the ranch with her and her brother Trace and their parents when they were kids. That's why, when a rogue operative gone way wrong escapes from captivity and heads towards New Mexico after the dogs, Wolfe is sent home to protect the dogs and catch the rogue agent, Cruz. Even if it means using the gorgeous and brave Kit as bait.

And no matter how much she stirs emotions he thought long dead.

This was my first experience with Skye's Foxfire books and I wonder if that may be part of the reason I had so many problems with this book. There wasn't enough world building or exposition to explain Foxfire or give me a good handle on the scope of the unit, nor lay groundwork for the characters and their abilities. I felt like I was lagging a step behind through most of the book because of it, not really able to connect to anything going on in it.

That wasn't the only problem, though. I thought the plot and characters lacked depth - especially Kit, who I never warmed up to. Some attempts were made to provide them added dimension, and Kit's debilitating degenerative disease and Wolfe's tragic childhood were good concepts, but neither plot point was really given much room to impact the story or the characters' development. There were also some stylistic issues with abrupt and awkward transitions that hurt the narrative. I loved the dogs, though. They were the best characters in the book. Unfortunately, that leads me to another problem.

There weren't many explanations offered or answers found in this book, so the entire reading experience felt a bit like a secret mission above my pay grade. What were the dogs capable of? Would what happened to Cruz happen to the rest of the group? If not, why? How, if Cruz has been in roughly the equivalent of solitary confinement in the bowels of a secret facility for the past two years and considered dead to his former teammates, did he find out about the dogs or make the contact with buyers? And how would he know to look for Wolfe's service record before he'd been assigned to guard Kit? Why was Izzy able to willfully defy the head of Foxfire without repercussion?

So many questions, so few answers, and not enough compelling me to continue the series to find out if they're ever answered.

The romance wasn't bad, though the pacing was a bit odd in places. I enjoyed parts of it very much. There was an abrupt jump to HEA at the end that seemed to come out of nowhere given the previous scene that had both Wolfe and Kit in it, but honestly, the romance and the dogs were the best parts of the book.

I still think that had I been around since the beginning of this series, I may have had a more favorable reaction to this book. The problem now is, I'm not sure there were enough good points in this book to motivate me finding out for sure.