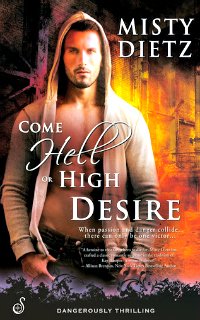 Disclosure:   An ARC of this book was provided to me by Ignite publisher Entangled Publishing via NetGalley.

Since his mentor John's sudden death a year ago, it's been a daily struggle for Zach Goldman to keep up with the construction business he inherited. He's getting by though, clawing his way through. Until someone leaves an inscrutable note on his door one morning. It asks just one short question. "Where is she?"

When Zach figures out John's daughter is missing, he's rocked by self-loathing and fear. He'd promised to take care of the woman who was like a sister to him. Obviously, he failed, but he's going to do everything he can to bring her home.

Boutique shop owner Sloane Swift isn't too concerned when Zach first shows up to ask about her friend and employee Ann. She's too shocked by the pleasant zap to her psychic senses when they touch and too overwhelmed by healthy, normal lust for the gorgeous man. When they meet up at Ann's house later that day, though, Sloane finds out just how bad things really are, for Ann and for her own closely-guarded secrets.

She can tell something very, very bad has happened even before she comes in direct contact with the negative energy around Ann's front door. Actually touching the doorknob hurdles her into a dark and terrifying psychic vision that makes her violently ill. Now she's got to explain the inexplicable to someone who doesn't look real long on embracing a bunch of woo-woo stuff, because one touch tells Sloane that Ann's time is very limited, and if Zach wants to find her, he's going to need Sloane's help to do so. No matter how desperate she is to keep her secrets.

Have you ever read a book that introduced you to a secondary character with such presence on the page that you're desperate for that character to get their own book just so you can spend more time with him or her? Maybe it was the scars and damage that the character has that drew you to him/her, or the honor with which he/she lived despite it. Maybe it was just the sheer intensity of his/her personality. Whatever it was, it caught you by the throat and almost superseded your feelings about the book in which he/she was introduced.

Then you get that next book, the one in which the secondary character you met and fell for is now featured, and it's fantastic, giving you a more detailed look at the character, more definition to his/her personality, and the sort of thorough backstory that both breaks your heart and makes you fall even more in love with the guy...or girl. It's everything you were hoping it would be and leaves you feeling excited and satisfied for that character.

That is exactly, to the letter, how I felt about this book and Zach's character. I loved him intensely and enjoyed finding out a bit about his past and the people in his life who helped shape him into the sexy, strong, sometimes self-doubting but noble man he is. A far better man than he thinks he is. There's just one problem with all that awesome.

In this case, there was no first book. In fact, as far as I know, this book isn't a part of a series at all. It's a stand-alone novel. And yes, that's a big problem.

See, I think there actually is a first book. There has to be, even if that book has never been published or the story exists only in the author's mind. This one is just too quintessentially a second book in a series to ever convince me that there isn't something, somewhere, written or not, that featured Zach's friends Twyla and Archie and their relationship. A story in which John is still alive, at least in the beginning, and Zack is the brooding guy with a tragic past that offers up a kidney to his best friend's terminally ill wife because he can't imagine not doing everything he can to save the life of the woman who has come to mean absolutely everything to the man who is closer to him than a brother, regardless of the danger to himself.

Because that is who Zach is. That's the awesome character we meet in this book. And we get all that delicious detail about his past that fleshes him out and makes him real, if in too-brief snapshots of a rough childhood and heartbreaking young adulthood. What we don't get is the foundation, the building blocks of the character and his key relationships to the now-deceased John, to Twyla and Archie, to Morgan, and most notably to Ann.

It felt very much like walking into a movie theater twenty minutes into the featured presentation.

Therein lies the largest stumbling in this book for me, particularly as it pertains to the suspense elements of the plot. Ann was a complete non-entity to me throughout the story, with no real impact on my emotions one way or another. As a result, I didn't care beyond the level of passing curiosity what happened to her, or if Zach and Sloane would find her before her ugly demise. I was more affected by what happens to a character we do meet in this book, yet that horror never really seemed to have much of an impact on either Sloane or Zach after the initial hit, which puzzled me.

Here's the thing though, I still liked this book, despite what is a pretty serious problem. In fact, I liked it a lot. The elements I couldn't connect with were far less significant to me than all the wonderful things to which I connected brilliantly. Like Sloane, who I absolutely adored.

Despite her tendency to burst into tears a bit too often for my tastes, I loved her. She had some personal issues and a tragedy in her past which provided some nice layers to her character. I appreciated that. What really made me love her, though, was her unerring eye for judicious pragmatism in the face of pretty disturbing goings on and the way she dealt with Zach's inherent alpha male-ness. She not only held her ground with the overprotective and occasionally stubborn male, she had no qualms about telling him exactly where he could stick his attitude when it started to choke her healthy independent streak.

I believe the term she used was seismic jackass, and I loved every second of it.

They were great together as a couple, and their chemistry hit hard, fast, and was totally off the charts. Maybe it wasn't always appropriate to their surroundings or what was going on in the story, and their relationship progressed to love way, way too fast for me given the timeline of events, but I couldn't help but absolutely love them. And I was a huge fan of Sloane's psychic abilities and how they were introduced and utilized in the story.

Now, about that story...

As a reader, I don't have to feel particularly connected to the victim of a crime to be able to fully enjoy the pulse-pounding action and thrilling danger in which the main characters get themselves embroiled. That's a very good thing in this case, because this book was an absolute roller coaster of emotion (in Zach and Sloane's relationship), danger, mystery, and suspense. I had no idea who was responsible for Ann's disappearance until the moment of reveal and the plot twists after that reveal made my gut clench. Did not see that horror coming at all.

For me, this book was absolutely a high-octane thrill ride of paranormal romantic suspense with great characters and a sizzling romance that wowed me in a lot of very awesome ways. It's just not a stand-alone novel...despite the fact that it is.

OMG! You are so right about this story, and Zach specifically as a character, feeling like they are 2nd book. Feeling like so much had already happened we didn't get to be a part of. Like you I really got into and enjoyed the story but I felt like it was missing something. You just nailed what it was. Hopefully Misty Dietz will go back and write that first book.

I hope she does, too! I'd love to read Twyla and Archie's story. It would have added SO much to this novel had that book come first.

Return from Come Hell or High Desire to Romantic Suspense