If It Hadn't Been For Libby... 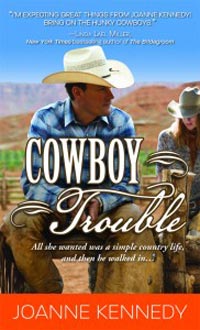 A Word of Caution for Kindle Owners:   There were lots of formatting errors - words with extra spaces in the middle of them most notably, but I don't blame the author for that, nor did it affect my rating. It was, however, distracting and kept interrupting the flow of my reading.

Fleeing a romance gone wrong and still smarting from the death of her beloved dog, journalist Libby Brown lands in Wyoming to follow a childhood dream to own her own farm. Jaded against men, determined to go it alone, the sheer scope of the landscape scares her a little, but a new job writing for the local paper on top of her soon-to-be booming chicken ranch gives her purpose.

Her neighbor, the tall, sexy cowboy Luke Rawlins gives her pulse a swift kick, but she's so leery of men that she doesn't trust his aw-shucks demeanor. The town sheriff is a total hottie, too, and obviously very interested in the new arrival, but his intensity quickly puts her off. In an effort to keep herself away from temptation and her heart safe from more heartbreak, Libby focuses her journalistic abilities on a cold case of a young girl's disappearance. No sooner does she start asking questions, though, then it becomes clear that however much time has passed, someone is very interested in making sure she doesn't get any answers.

Alone in a town miles away from her previous home, Libby is going to have to choose between the cowboy and the sheriff for help with her work, but the hardest part is going to be protecting her life...and guarding her heart.

This cute, quirky, often amusing cowboy romance started off well with the spirited but reluctant Libby and the sweet and earnest Luke. A weird but charming group of secondary and ancillary characters added some light entertainment, and the subplot of investigation into the missing teenager added some darker tones for balance.

Despite how much I liked Luke, though, and how spunky Libby was in a lot of ways, when it came to the investigation or anything to do with Della's disappearance, Libby lost all appeal. It wasn't the stupidity of some of her actions that sunk her character, though they were egregiously less than smart, and I have a definite prejudice against stupid heroines. More than that, I quickly got fed up with, then thoroughly loathed, her emotional retardation and never-ending, witless vacillation. I pretty much hated how she so easily swallowed every little tidbit of unsupported information that put others in the worst possible light, despite her alleged fondness for those others and her own instincts, as if the concept of trust for her was as implausible as extraterrestrial occupation. Because of that, her character's fears and suspicions bounced around like a caffeine addict on methamphetamine, and were completely unsupported or affected by her own intuitions or knowledge. It was maddening.

Her investigative techniques could have been a real benefit to the suspense and mystery subplot. Instead, she goes from telling a guy she loves him to suspecting him of murder in the space of a few hours because a guy who has given her the creeps through most of the book and, in fact, almost assaulted her, tells her something that she has no way of even knowing is true. That sort of unsubstantiated emotional waffling was tragically common and totally turned me off. Several times I wished someone would make Libby disappear...and that probably wasn't what the author was going for.

There were a few minor technical issues with the book, as well. The narrative was occasionally choppy and the flow of the story inconsistent in places, but it wasn't horrible. Just something I noticed. I also felt that the balance between the suspense and non-suspense aspects of the story went a little awry in the latter half of the book, when the investigation into Della's disappearance started to take more precedence, but that only bothered me because of how much I enjoyed the relationship between Luke and Libby and was entertained by watching it develop.

What was particularly nice about the book was that their relationship did develop. And it did so at a surprisingly natural pace that felt organic to the characters. It was also based on more than just how hot they thought each other was, or how much they lusted after each other. It's been awhile since I read a book that spent time drawing two characters together as friends first as they get to know each other, then developed the relationship, and this was both refreshing and entertaining as a result.

If only I hadn't had such an intense loathing for Super Sleuth Libby, I would have really enjoyed this book. Joanne Kennedy obviously has plenty of skill at offering up a lightly comedic romance for some simple pleasure reading. With a more intelligent and emotionally steady heroine at the helm, and a few tweaks here and there, Cowboy Trouble could have been a lot of fun for me.