Not As Enchanted As I'd Hoped 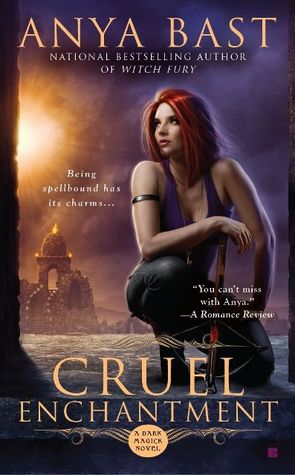 Over three hundred and sixty years ago, Emmaline Siobhan Keara Gallagher was a finely tuned weapon of the Seelie Summer Queen, an assassin of note and a scourge on the Unseelie. She was also the fae who murdered Aileen, the woman Aeric O'Malley had loved with a fierce devotion that burned brightly long centuries after her death. Emmaline has been beyond Aeric's reach ever since, having fled Ireland before the fae were rounded up and imprisoned behind the walls of Piefferburg. Aeric has kept the fire of his thirst for vengeance stoked hotter than those of his Blacksmith forge, intent on killing Emmaline at the first opportunity and praying to his gods daily for that opportunity.

For over three hundred years, Emmaline has lived the life of spy and double agent as a free fae in the human world. One of the founding members of the Humans for the Freedom of the Fae (HFF) organization, she's spent the last few years deep under cover as a loyal human Worshipful Observer for the Phaendir, the group most responsible for the fae's imprisonment. Now she's on a quest for the HFF, one that will require her to enter Piefferburg, locate the Blacksmith, and secure his assistance. He's the only fae capable of making the key that will unlock the enchanted box that is the resting place of the second piece of the bosca fadbh, a puzzle box that will unlock part of the Book of Bindings and allow for the fae to finally break free of their centuries-long imprisonment.

Emmaline needs the Blacksmith and the Blacksmith wants her dead by his own hand. Not exactly the auspices of a great working relationship, but they will have to work together to pull off the daring acquisition of the second piece of the bosca fadbh without the Phaendir finding out about it. With the memory of his dead love between them, however, Emmaline is aware that Aeric is far more likely to kill her than help her, and if she can't convince him to trust her, their entire race may remain imprisoned forever.

After a stellar series opener in Wicked Enchantment, Bast takes us back to the fae holding compound of Piefferburg and the courts of the Tuatha Dé Danann, the fanatical threat of the Phaendir, and the hope inherent in the search for the bosca fadbh. Despite a strong, admirable heroine with a dark and twisted past, a passionate, fiery hero with an axe...and a plethora of other weapons to grind, and the return of several other well-liked characters from the first book, I ended up being disappointed in this second book of the series when compared to the first.

Dark, dangerous, and well balanced, Wicked Enchantment was a five star read for me, but several issues with plot and pacing and a couple of problems with dialogue tripped me up in this installment. I was very put off by the first third of Cruel Enchantment, and found it laden with too many handy coincidences to be able to maintain my willing suspension of disbelief. The premise of the book is fine, the concept of the plot was intriguing, but the way in which it was executed at the beginning robbed the story of its intensity and suspense and made the initial scenes between Emmaline and Aeric seem implausible and inorganic to me. Perhaps if Aeric hadn't been so headily imagining Emmaline stepping into the fae prison that is Piefferburg and right into his clutches just moments before she actually does so...for the first time in her long life and after almost four hundred years free...I would have had an easier and more forgiving time at the beginning. Then, to compound my difficulty in swallowing that fortuitous happenstance, the two weeks in which Aeric holds Emmaline prisoner, threatening to kill her, trying to kill her, and getting roaring drunk to drown out his unwanted lust for her, pass in a muddled mess of disjointed and confusing pacing, timing, and impotent character action that by the end felt far more like a few days than a couple of weeks. I found it all rather bizarre, and not very threatening to Emmaline's tattered virtue, though Aeric's frayed ferocity took a beating.

Before the slings and arrows start to fly, I have to say that after that awkward beginning there were several good things that start to happen with the story. The book picked up and I started getting into it. While it does lack much of the brilliant world building and creative description that set Wicked Enchantment so high in my estimation, and it wasn't as richly populated by secondary and ancillary characters (and those plot threads that did include secondary characters I found to be ill conceived and predictable, as the case with David's thread), I started to really enjoy the evolution in the relationship between Emmaline and Aeric, and liked seeing some truth start to alter perception for both of them. Admittedly, I was a little disturbed by Aeric's proclaimed passion for Aileen from the very beginning, given what you find out about her, but I thought Bast brought Aeric through his stages of character development with sensitivity and a sense of realism.

I have no complaints about the two lead characters from a romantic standpoint. I found them well suited to each other and strong in their own right. They had a lovely array of scenes to further their relationship that were at turns poignant, tender, and sexy as hell. And my pleasure with the book through the middle of the story was secure because of it. And then the book went a little awry again towards the end.

There was definitely tension and a hella creepy atmosphere generated by Emmaline's interactions with Brother Gideon, but just about everything else she's involved in on the human side of the wall was very perfunctorily covered and had some awkward transitions and jumps in the timeline. I felt as if I was leapfrogging through the later part of the story at times. That disconcerting lack of fluidity continued through to the end of the book, with a myriad of life- and quest-threatening plot threads popping up in seemingly random rapid fire, and just as rapidly being resolved with a minimum of development. And the book's conclusion was extremely abrupt.

For my tastes and strictly in my opinion, Cruel Enchantment didn't quite rise to the level of adept storytelling that I felt existed in the first book of the series, but there were parts I liked quite a lot...just as there were parts that made me struggle to like even a little. The strongest and most fervent pleasure was in the character of Emmaline, who I greatly admired as a damaged, layered, and crafty heroine full of courage and determination, even in the face of crushing emotion and debilitating torment. And I love the world that Bast has created for this series. There are so many truly nifty things about it that I admire greatly. I wish we had been allowed more interaction with the various fantastical creatures of Piefferburg and with the familiar characters we met from the first book. But that's just me being greedy.

I was also pleased to note that the third book in the series, Dark Enchantment, is set for release on April 5, 2011. My adoration of Wicked Enchantment (Dark Magick, Book 1) and the things that I enjoyed about Cruel Enchantment have assured that I will continue reading the series. I just hope the next book is a little closer to the first in both style and substance.