The Crux of a Different Matter Altogether 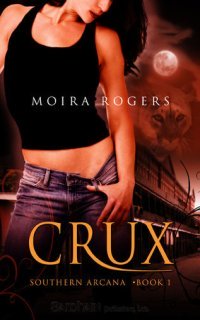 Mackenzie Brooks is on the run from a crazy stalker. For a month she's fled from city to city, forced to survive in ratty motels, burning through her meager savings, haunted by confusing dreams and desperately trying to stay ahead of the threat chasing her. When she ends up in New Orleans, her financial situation demands she takes a job as a bartender to try to bolster her funds. The owner of the bar, Nicky Peyton, knows something isn't quite right with Mackenzie, guessing she's on the run and doubting she's got a place to stay as Mackenzie had insisted. Nicky calls in a favor, asking her best friend and private investigator, Jackson Holt, to shadow the skittish Mackenzie on her way home from the bar one night to assure Nicky that her newest employee and friend is safe and has a place to sleep. When Mackenzie picks up her tail that fateful night, and they meet face to face, it sets their lives on a path neither could have dreamed of...even in their worst nightmares...and introduces Mackenzie to a truth she would have to be insane to believe. Soon the reality of magic and shapeshifters, mad Seers and psychics is set to crash down on them both and only their bond - and the help of a few friends - will save them.

Crux started out strong, the visceral fear and uncertainty of Mackenzie was well written and the plot quickly paced through the induction of Mackenzie both to Jackson and into a world she isn't sure she can actually believe in. I was set to really enjoy this book and thought it had a lot of potential with an interesting premise and unique character set. Unfortunately, I'm starting to feel like a bit of a curmudgeon, because much like the last few books I've read that got great reviews and were highly rated, I just barely liked this book and almost rated it two stars. After a great beginning, I think the book just fell apart for me. On just about every front.

The pieces were there for a really kick ass urban fantasy/paranormal romance. I thought the cast of characters were strong and the plot definitely appealing and interesting. The execution, however, was so lacking I repeatedly stumbled over my willing suspension of disbelief. I could understand why some characters were willing to help Mackenzie, and utterly befuddled by the motivation in others - and no believable explanation for those questionable motivations were given. I totally bought into the decisions made as the plot got more and more dangerous...but couldn't figure out why some aspects of the plot were even included, as they did nothing but lesson tension at important points. There were a few instances where I felt actions taken or character development directly contradicted previous definitions and information. And without wanting to include spoilers, I know I sound overly critical and vague, and that frustrates me because I have several pointed questions about specific events.

I will say this...I don't think this will add too many spoilers...one of the bigger points that bothered me was the Alpha's personal participation, given his definition in a previous part of the book. And I was never fully invested in the relationship between Mackenzie and Jackson because of the odd way I felt it developed. I liked them together, but I just didn't feel like they were given enough time to develop beyond a physical attraction, nor was the narrative in that area fleshed out enough to get me to where they were by the end of the book.

As a result, Crux ended up feeling very much like a puzzle with a bunch of brilliantly colored pieces, but the placement of each just wasn't quite right, so the puzzle as a whole didn't come together for me into one cohesive story. There was a lot of promise, and a lot of potential, but I just didn't feel it was ever realized for me. And the parts that didn't work for me didn't work to such a large degree that I would have to think very hard before continuing on to book two of the series.