Crying for the Moon

Fangy and Flirty Fun With Claws, Cats, and Coffins 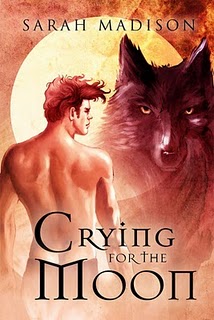 Alexei Novik escaped the vampire Life he'd grown weary of and bought a rundown house in the mountains. All he wants is to be left alone, though he has no doubt that he hasn't heard the last of his power-hungry ex, Victor. With the help of a small pack of werewolves he considers his friends, he settles into his mountain home and starts fixing up the place, ignoring the constant pull of the coffin that regenerates him but which exacts too high a price for it's rejuvenating embrace.

Alex certainly has his solitude; his only regular companion since moving in is a feral tom cat who has taken to hanging out around his property. He's not so reclusive, however, that he's failed to notice the attractiveness of his nearest neighbor, the affable veterinarian Dr. Tate Edwards, as he passes by on his various backs and forths.

As the full moon approaches, Alex's offer to the pack to allow them to hunt in the woods beyond his home starts to sit wrong on his shoulders. He's worried about the human fragility of Tate and the threat to the cat he's taken to calling EPT (Evil Psycho Tom). He doesn't want anything to happen to either of them, though Alex doesn't want to examine those feelings too closely. Giving Tate as neutral a warning as he can while protecting his friends' secrets alleviates some of his concern, but it's not like Alex can warn EPT to watch out for rampaging werewolves when the moon rises.

Even a vampire stays out of the way of a werewolf in wolf form. Their instincts are completely animal, their strength supernatural. When he sees his friend Peter in wolf form racing into the woods after the cat he'd grown so fond of, Alex could only hope EPT would be safe. The sounds of a fight makes his stomach sink, but it's the sudden roar and the yelps of fear, then pain, that sound far too canine that sends Alex racing after them. What he finds chills him. Something in the woods sliced Peter up badly and his alpha, Nick, is ready to tear out Alex's throat because of it.

Quick thinking and Nick's unique abilities are all that stand between Alex and an untimely demise, but unless Peter gets immediate medical assistance, it will be the werewolf who dies on the mountain that night. And the only help Alex can offer a werewolf in wolf form is one handsome veterinarian neighbor with a charming smile. Hopefully he'll have a spine of steel, as well, or this is going to be one very long damn night for them all.

I love when a book surprises me like this one did. I started Crying for the Moon with little information beyond it being a M/M paranormal romance, but I guess even that set up some expectations. While that does accurately describe the genre for the book, it doesn't come close to encompassing the whole of this charming and endearing story.

The lead character, Alex, is a vampire, and most of his friends are werewolves, but the book is just as much about Alex walking away from a life that had become untenable and his struggle to carve out a new life for himself, building and strengthening friendships, and risking his heart on a relationship he hadn't wanted but can't seem to help hoping for. He's a little socially awkward, a little uptight, and can even be sort of adorably clueless. I loved him.

Scenes of Alex working on fixing up his house go hand in hand with scenes of casual dinner parties with friends. Issues of race relations between vampires and werewolves are nestled in between boisterous singing, stray cats, and casual flirting. Paranormal elements butt up against family squabbles and issues of sexuality. All in all, it was a surprisingly multifaceted tale that covered a lot of bases and didn't, really, focus solely on the paranormal elements.

It struck me as a happily odd story with quirky characters, with tender moments, funny moments, and moments that positively charmed me. There were tense scenes and scenes that posed serious danger to the characters, yet the book wasn't dripping in angst, burdened by an overly dark tone, or heavily plotted with grim themes and situations. Alex is the focal point of the story, and he's certainly at a crossroads in his life, but it's not some dour sort of Gothic tale. He's...well...just a guy...a little antisocial, a little perplexed by and envious of the pack bonds his friends share, a little lonely for someone who would value him for who he is instead of what he is or what he has, yet fiercely determined not to need anyone. I couldn't help falling for him, really, any more than I could help adoring Tate's more insouciant charm.

There were a few plot threads that were fairly predictable, primarily centered around the external plot conflict, and I felt the world building and exposition were a little on the sparse side in regards to the paranormal elements. There were also a few moments in the book where I felt like I missed previously established backstory, as if there was a previous novella or book with the characters in it somewhere (which is not the case, according to what I could find on the author's website). Still, there was history referred to but never more than cursorily detailed - like Alex's singing career, or why Alex and the pack seemed close friends on one hand, but didn't really know all that much detail about each other on the other, or what motivated Nick and pack to help Alex get away from Victor. None of those were significant issues, per se, but it did make me feel like I had missed out on some interesting storytelling somewhere.

I loved the twists and turns and surprise developments, though. Sure, some of them I'd guessed, but others I hadn't and I appreciated them even more for catching me off guard. When that gets mixed in with the other high points, the entire book just flat-out worked for me. I enjoyed it tremendously and plan to follow up on more of Madison's work.

For fans of contemporary or paranormal romance who are interested in trying out M/M relationship fiction, I'd highly recommend this book. Though it's not what I consider an erotic novel, the attraction between Alex and Tate is intimately charged, and there are a handful of explicit sexual scenes featured. Still, the focus of the plot arc in the book is on the main character, his burgeoning relationships, and the subsequent action, not on sex. In fact, Crying for the Moon is exactly the sort of book I would recommend to the M/M novice who would prefer a lighter-toned romance without a bookload of explicitly graphic sex scenes. It would be a well-written and entertaining introduction to the genre. I was very pleased with this book and look forward to checking out much more from Madison in the future.

I've been on the fence about this one, cover is what grabbed me initially, but I'm always about a new author... I think I'll try it.

Hey, Mariana! I enjoyed it quite a lot. If you try it, I hope you stop back by and let me know what you thought. Happy Reading!

Hey! So I read it and didn't love it... I really liked the werewolves, but Alexei and Tate I didn't care for. The cover is gorgeous and the concepts for the vampire race were different. While I did enjoy it, I guess I wasn't riveted or interested in learning more about Alex and Tate. Julie I could also do without, how annoying?!

If there are other books featuring the wolves, I'm definitely reading, but the vampires.... not so much.

I must say that I did appreciate that the sex scenes weren't heavy and graphic. How sad that I needed a break from all the details? The light handling of the scenes between partners was great.

Hey, Mariana! It's great to hear your impressions and opinions. Seems I liked it overall a bit more than you did, but we do agree on a few points. I, too, favored the wolves but enjoyed the more unique aspects of the vampire race.

As to the sex scenes, I agree - not heavy or particularly graphic. I've grown a greater appreciation for the non-erotica romances in M/M fiction and it's good to see authors who acknowledge that M/M doesn't automatically equate to graphic sex or erotica. It's possible to have sex scenes no more explicit/graphic than your average mainstream heterosexual coupling and still offer quality romance.

I'm SO glad you posted your thoughts! I love your insights and comments!

Return from Crying for the Moon to LGBT-M/M

Return from Crying for the Moon to One Good Book Home