"I Took the Road Less Traveled. Now Where the Heck Am I?" 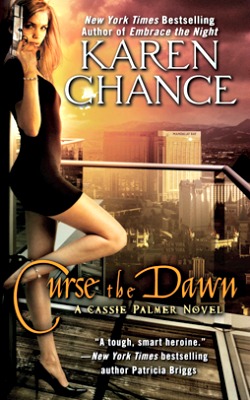 I've just got to get a bumper sticker with that saying on it!

Karen Chance's latest Cassandra Palmer book, Curse the Dawn, quite literally slams you into action from page one, grabs you by the hair and throat, and half drags, half shoves you along with the story at rocket speeds while you cling desperately to the Kindle (or the pages) and pray you can keep up. At turns hilarious and hair-raising, I found myself laughing out loud and then cringing in sympathy as Cassie hurtled towards disaster and destruction at an alarming and often self-inflicted rate of speed.

If you're looking for a book with thoughtful and careful character development (or...well...any at all), a calm and measured pacing, and a satisfying conclusion that leaves you feeling like something significant was accomplished in furthering the overall arc of the series...this is neither the book nor the series for you. And usually that's a big part of what I look for, but I have to admit, the Cassie Palmer series is sort of a guilty pleasure for me, because sometimes, I just like my action to be mindless, fast, and fun.

The Cassie Palmer series is exactly that.

If I look at this book critically, though, there are some problems.

Cassie is brave, loyal, head-strong, and stubborn as the day is long. She has a legion of peccadilloes that I find both endearing and agonizingly annoying depending on the situation. What truly frustrates me about her, though, is that sometimes she's an astute and capable heroine (though, admittedly not too often in this particular book) and sometimes she's absurdly stupid. I'm not entirely sure if this is an intended character trait or an author's device.

Stupidity shouldn't be a plot device. If Chance is swinging that pendulum so far into idiocy just to get the story to the next stage of everyone's-out-to-kill-Cassie, it's a lazy way to do so. And if not...why have a character search out guidance and training for the Pythia job if you're just going to beat us to death with scene after scene of Cassie never listening to advice, warnings, hints, or suggestions from those in the know to begin with?

Curse the Dawn in particular seemed too weighted down with scenes of Cassie stumbling around trying not to die while nothing else of any worth to the arc of the series was explained or described or fleshed out at all - and there were TONS of opportunities to do so! More than in ANY of the previous books. Chance gave us nothing more than snapshots of Important Events (what happened at MAGIC, the gathering of the consuls, the issues with the White Circle's leadership, the gathering war, betrayal and corruption, and whatever Mercea was so busy with that he was in so little of the book). I would've liked to have seen more than the slide show.

By the end, Curse the Dawn seems to be an entire book focused on the one character LEAST connected to the Important Events going on around her.

Another issue is one I've had for the whole series, the never-ending plot detours. Some of them are truly hilarious in this book, but they're often so plentiful in the series as a whole that I'd be left wondering if Chance is a caffeinated sugar addict with ADD if I hadn't also read (and thoroughly enjoyed), the Dorina Basarab series opener, Midnight's Daughter (Dorina Basarab, Dhampir, Book 1). This particular aspect of Chance's storytelling was notably (and what a relief) absent in that book, so now I don't know what to think. All I know is that there are just too many ancillary things that go on in each book in this series and when combined with the relentless action, makes the read sometimes a little garbled.

Until, actually, the end.

It doesn't matter whether I look at it through my adrenaline junkie, guilty pleasure glasses or my more critical ones, there wasn't anything at all I liked about the last two chapters of the book. Bare-bones in the extreme (would've made fashion models look hefty), the conclusion was a major let down. In fact, given the build up from the previous book and the ominous portent of Cassie's clairvoyance in this one, the final chapter in particular was jarring and abrupt. Very disappointing.

Up until that point, I would've rated Curse the Dawn a 4.5 (despite the flaws, I really did enjoy the first part that much) but the last two chapters knocked it down to a 3.5 for me.

"I took the road less travelled. Now where the heck am I?"

Somebody get that girl a GPS.

Return from Curse the Dawn to Urban Fantasy Genre

Return from Curse the Dawn to OGBDA Book Review Home