Better Than The First, But... 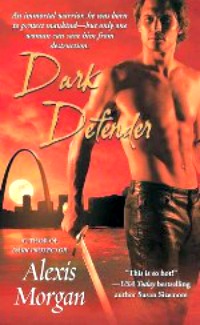 I'm not going to spend a lot of time going on and on about what I liked about Blake and Brenna's story in the second book of the Paladins of Darkness series, but I will say a few things. I thought the relationship between them was a little more developed and interesting than the one between Devlin and Laurel in Dark Protector (Paladins of Darkness, Book 1). Part of that was the simple fact that there was more time for Brenna and Blake to be together, as there wasn't the need for the world-building and mythos setup that there is in a first book of a series, the other part is that the scenes between them were simply written better - more realistically, with better dialogue and a stronger chemistry. I had a problem with aspects of the romance between Bane and his handler in the first book. I didn't have the same sort of problems here. True, I had different ones...but I'll get to that in a moment.

I'm a self-confessed sucker for the unrequited love of youth becoming deliciously requited in adulthood, so that aspect of the Blake/Brenna pairing was particularly enjoyable. I also thought the plot of Dark Defender was paced more evenly and started off with more of a bang...both literally and figuratively...than the first book. As far as the characters, I enjoyed Brenna's spunky, indomitable spirit even when faced with horrific loss and unbelievable reality. Trahern was a favorite character in the first book, so I was also pleasantly surprised to get a bit of backstory on him and see him developed a bit more. Jarvis was a nice addition to the Paladins (though he was sort of two dimensional and not too individual - there sure are a lot of John Doe's in the Paladin ranks). Frankly, I don't have any big complaints about the lead characters or the romance part of this paranormal romance.

It's the rest of it that gives me some trouble.

I'm struggling with being honestly critical without overly spoiling the plot, so I don't know how much detail I can get into here, but some things need to be said. I was willing to let a lot of unanswered questions and undefined world/mythos parameters go in the first book because it was, in fact, a first book of a series, but after finishing the second book, I'm starting to get a little concerned. I don't feel the world of the Paladins and their rather large-seeming organization is very well defined for the reader in either book. Yes, we got nearly a Venn diagram of the structure of the Paladin organization in this one, but not enough of the overall picture and the people (beyond Paladins) involved in that picture to feel truly satisfying. And even those non-Paladins in the overall organization are treated more like barely-tolerated nearly-enemies to the cause than actual comrades in the fight against Other invasion.

Also, everything about this series so far feels very much like the reader is being told how things are for the Paladins, and it sucks, but everyone is resigned to just live with that same status quo they've been living in for millennia despite technological, medical, and communication advancements. Nothing has changed for the Paladins and no one seems to care to make that change (except for one lonely handler who is in love with one Paladin...and that was the driving plot of the first book). And that includes the Paladins who live their lives with a death sentence over their heads! I do not understand that "this is how things have always been so that's just how it is" mentality in the characters and without some reason why, or some far more in-depth world definition, this aspect of the series is not working for me at all. It makes the books and the series feel very two dimensional. Even mentions of attempts and failures would be something to show that doctors, scientist, historians, and others were a bit more...human (what scientist do you know that isn't interested in solving big problems like the Paladins turning Other?) and this would definitely flesh out the world a bit more.

There are also some things in Dark Defender that really struck me as wrong. A large continuity error between this book and the last comes to mind first. In Dark Protector, Devlin is teetering on the brink of turning when he's killed at the beginning of the book and his "revival" takes five days. It's stated that three is about the norm. In this book (and I'm really trying not to include major spoilers) that no longer seems to be the case. That's a problem that an editor should have caught, because it's a defining point of the Paladins as a group/species/whatever. Smaller but equally annoying issues: Brenna just suffered a tragedy and she's hopping on Blake's...er...bandwagon...a little too soon after for me to truly buy her decisions. It could have been written more like a comforting thing, or an affirmation of life thing and I would've bought that. Lust and a youth of unrequited love wasn't motivation enough given the nature of the tragedy (IMO).

Barak the Other we meet in the first book is still not explained. If the race is so bloodthirsty and wrong, why isn't he...and why is no one asking that question? And in the first book it indicated that Others that escape the tunnels spread dissonance in our world and pollute it because of it. Even the ones that blend in versus the ones that go on a killing rampage. So...explain Barak to me again?

And still no answers as to why the Others want over here so bad, no glimmer of interest in finding out motivation, or improving the way to deal with them, either. Just an almost childlike fascination with gems that don't exist in our world and an odd wonder about what their value would be to the people in the organization double crossing the Paladins and taking them as bribes. But...just how are they doing that - making contact with the Others to get that payment and make those bribes if every time the barrier drops the Paladins are there to kick butt? How did it start?? When would the first muckity-muck to turn against the Paladins even get that original opportunity?

Oh...one other thing...how did the judge know from the first moment that Blake was a Paladin?? Are Regents psychic? Do they have some sort of genetic detector we don't know about? Was it foretold somewhere? Did Blake heal really wicked fast in front of him?

Argh! There's so much of this series that frustrates me because so much of it strains my willing suspension of disbelief until it borders on bad story telling. And yet, I really do think the concept behind the Paladins is interesting and fresh. Plus, I'm always going to be a sucker for paranormal romance, so I'm way more forgiving of big plot holes and general contradictions than I would be in any other genre, so long as the romance works for me. And again, Blake and Brenna's worked for me. This is by no means my favorite paranormal romance series (too many others do it significantly better than Morris), and I fear I'm destined to be disappointed by all the things that the series could be but isn't, yet I can't help but like the Paladins as people and feel for their plight, so I guess I'll continue the series for a little while longer, at least. But to get higher than a three-star rating from me is going to take some serious work, full stop.