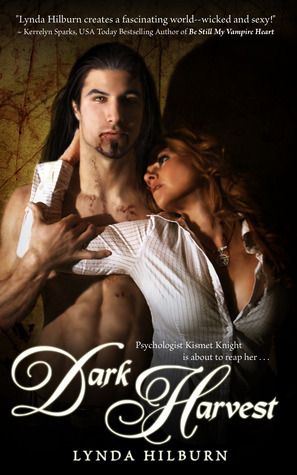 Set five months after the events in The Vampire Shrink, Kismet's fame as the vampire psychologist has grown. She splits her practice between the living and the life-challenged and Dark Harvest opens with her being interviewed by a Denver radio shock jock on a local station. While she's trying to ignore the wretched little cretin's disgusting habits, a call comes in that sets Kismet's senses to tingling and puts fear in heart, a call from a force of vampiric evil so old it defies understanding. The low, seductive voice informs her that there's a new player in town, and the Slayer is going to get what he's come for, and have an uberspecial dance with the fair Kismet as well. The kind of dance that will leave her mind shattered and her body trembling for more. Soon Kismet is feeling strange and behaving stranger, and her vampire boyfriend Devereux is doing everything he thinks necessary to protect and defend her...in as high-handed and superior a fashion as he can. The discord and danger escalate until Kismet is hardly recognizable even to herself and the danger eons old does more than start knocking on the door...it starts obliterating the doors completely.

I can't begin to tell you how much trepidation I feel about submitting this review. I have to admit, I almost didn't. It's difficult being the only one who so greatly dislikes something most everyone else loved (see Amazon.com reviews), but I really didn't like Dark Harvest, and no amount of wishing can change that fact. I was hugely disappointed because I really liked The Vampire Shrink (Kismet Knight, Vampire Psychologist series)(4 stars for that one). Perhaps that colored my reaction to Dark Harvest, the crushed expectation leaving me feeling even more negative about this one than I would've been if I hadn't liked the first one so much.

I have to say, I don't think the book was badly written, nor do I have any criticism for the author's ability in general. I actually think Hilburn has a very nice way of writing lyrically descriptive scenes that add beautiful color and life to the background of her books (the way she describes the mountains in Colorado brings them to vivid focus). I also admire her ability to write the psychologist aspects of her lead character in a very comprehensive fashion. In truth, the things that I so thoroughly detested about Dark Harvest are more personal preference/opinion based issues, and that's actually why I finally decided to submit this review, even though I know I'll be the wee little minority whisper in a cacophony of praise.

The first major problem I had with the book was that the plot seemed a little too similar to its predecessor while lacking the complexity and layers that the first had. Again we have a psychopathic vampire (with issues) who is leaving a trail of bloody corpses (and some not-so-bloody enigmas) in his wake, and again that psychotic fiend has set his sights on Kismet. Much horror and terror and some weird sexual behavior ensues. Because that aspect of the plot seemed so similar to the first book but in this case lacked the appeal of the mystery and the character of the FBI profiler that added some interesting dimensions to the first book and Kismet's development, I felt the plot in Dark Harvest was significantly less compelling.

That was the first major problem, but it wasn't the biggest. What put the largest and most unforgivable nail in this book's coffin was the portrayal and development of Kismet. I'm probably going to get a little rant-y here but I'm going to try not to be too spoiler-y... I loathed Kismet through approximately the first 70% (Kindle) of this book. And I don't mean a little. I loathed her a lot. Just about every single one of my personal bugaboos about female leads in urban fantasy was trod all over with reckless abandon in the first three quarters of this book. She wasn't the overly cautions and cerebral psychologist slowly delving into a wide, dark new world we met in The Vampire Shrink. In Dark Harvest she became a vapid, bitchy, hormone happy, idiotic victim whose level of stubbornness and stupidity catapulted her from sympathetic to ultimately killable, as far as I'm concerned. And while I know she was under a particularly evil influence through most of the book, I didn't feel it made her character any less contemptible, because even before the amusement park, her criticisms of the metaphorical chest thumping and knuckle dragging of the ultimately controlling Devereux were completely inconsistent and contradictory to her hair-brained willingness to allow an absolute stranger manipulate her into several potentially life threatening situations. And over a cup of coffee, said stranger, the reporter Maxie, was her new BFF. Um...yeah. That certainly felt like organic character development - NOT!

After five months dealing with her vampire hottie, Kismet still hasn't wrapped her mind around the undead world. She resents that an 800 year old non-human may have a better grasp of the potential dangers in her new life but does nothing to try to expand her understanding of that new life. Sure, Devereux's commanding demeanor was a little off-putting, but she's an adult and a therapist on top of that...why wouldn't she more firmly address that aspect of his personality in the five months they've been together? Instead they argue again and again about whether or not she's his mate, and allude to their relationship as abusive. And they resolve all their problems with...oh...wait...they don't actually really even address their problems. And they sure as heck don't resolve them. They have lots of fun monkey sex, instead. In fact, through both books, Devereux's character isn't exactly what I would call well developed. His penis is...but he's not.

I detested how seriously stupid Kismet behaved in relation to...well...everything, but particularly Maxie (and that plot thread was grotesquely predictable). Both under the evil vamp's influence and on her own, Kismet's character ran the gamut of bad character traits, seeming at turns self-absorbed, obtuse, inappropriately wanton (my life's being threatened, I doubt I'm gonna be focusing on the big happy), judgmental, willfully ignorant (about the vamp world, anyway), and a right stubborn bitch. I have no clue why Devereux loves her.

There were so many missed opportunities in this book. I would've loved some world building, to give readers a better idea of Hilburn's vampire mythos, and the mythos of the larger world around the vamps. A plot that was a little more varied and had a bit more depth would've been nice, too. I would also have preferred much more attention given to developing the relationship between Kismet and Devereux. Hell, I would've preferred any development. There was sex, and there was the big D telling Kismet what he was going to do to keep her safe. There wasn't much else. Of course, I would've been thrilled if Kismet hadn't seemed like such a waste of space and time through most of this book. Lots of missed opportunities.

I know it's been awhile, but back in October of last year there was mention of a third book, Blood Therapy, that is in development. I don't know if that's still the case, as I have seen nothing to indicate such on Hilburn's website, but regardless, I'm not entirely sure at this point as to whether I'd even choose to continue this series if there are more books forthcoming. I really liked the first book, but I disliked the second to such a degree that I feel a bit reluctant to give the series another go. And as I already know I'm in the minority with this review, I don't know how I'd be able to judge with any level of certainty whether the third would be to my taste even with reviews. I guess it's a moot point for the moment. We'll see.