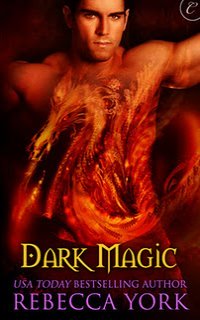 In the darkest days of the kingdom of Arandal, the castle is under siege from the barbaric Lubantans. For two weeks the castle has stood against the forces from the south, but food is running out and their stranglehold is unwavering. Princess Devon, daughter of the king, is in despair as she kneels in her room and prays to her goddess for guidance and assistance.

A sound from her room is the only response and she whirls to see a large, imposing figure shadowed against the wall. As the man steps forward, the princess is torn between fear and an unfamiliar yearning. He is a stranger, but before she can call for a guard, he's on her, and the dark intent in his eyes holds her in thrall.

His name is Galladar and despite herself, he stirs her soul and, for a few blessed moments, makes her forget. Then he disappears. But not before he reminds her of an ancient tale of magic and mystery, of dragons and maiden sacrifice, of protection for a long-lost kingdom. Not before he seals her fate and gives her soul wings, condemns and frees her, and makes her burn. Not before he sets her on a path that will alter kingdoms and change...everything.

One of the reasons I don't read all that many short stories and novellas, or care much for anthologies that feature them, is that too often the stories seem very two dimensional or lacking in the sort of depth of history and world building, plot and character development that I prefer. That was far from the case in York's short but delicious little story Dark Magic.

I was impressed at how quickly but thoroughly York snapped the world and backstory into place, dropping the reader into the tale towards the end of a hopeless defense of a kingdom and using that as character motivation and story progression. Princess Devon was nicely fleshed out as an innocent with a fiery spirit and fighting nature. Galladar was a seductive mystery who actually benefited by the lack of development. They had chemistry and individuality I appreciated.

The plotline, too, was surprisingly robust considering the short length. Maybe it's not the most original plot, but I've got a weakness for dragons and I liked how it all came together. No, it didn't answer all my questions, and the story ended more with hope for the future than absolutes, but I can't honestly imagine how it could have ended any differently in such a short tale.

For a short story, Dark Magic offered a surprisingly well-rounded world and likable characters, a plot that appealed, and a sexually charged romance that ended with promise for a future. I honestly couldn't have hoped for much more.

Return to top of Dark Magic