My Last Pursuit of Collins 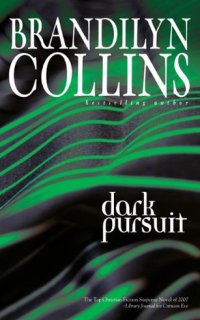 "The difference between fiction and reality?
Fiction has to make sense."
~ Tom Clancy, 1947-

Twain knew it. Clancy knows it. Collins needs to learn it.

This is the second Brandilyn Collins book I've read and it's become clear that while I think she has a certain style of writing that's compelling, I have some intrinsic issues with the stories she tells. In Dark Pursuit those issues are the very foundations of a book: the premise, plot, and character actions, which in this case vacillate between inane and ludicrous, obliterating not only the willing suspension of disbelief but any ability to do so whatsoever.

In Dark Pursuit, Kaitlan comes home early from a bad day at work to find a dead woman in her bed, a strip of black fabric with green stripes around her throat that matches the M.O. of two other strangulation victims in town in the past year, signs of a struggle and the engraved pen of her boyfriend of three months, police officer and son of the chief of police, Craig. Kaitlan is horrified, terrified that Craig was the killer, just as she was sure he couldn't possibly have done it. Then the phone rings and a conversation with Craig convinces Kaitlan that he did, and on top of that he knows she's not at work like she told him, knows she saw the body.

As soon as she hangs up with the alleged brutal murderer...the man she loves and the father of the baby she's carrying, Kaitlan doesn't call the police. She doesn't call anyone. Instead she flees to the house of her grandfather, a world renowned author and King of Suspense, despite being estranged from him for years. He, surely, can tell her what to do. But he is not the man he used to be following a car crash that left him brain damaged. Yet still she listens to him, takes his advice, and on the word of a fiction writer who's not all there mentally, returns to her apartment as if nothing happened to go out with a man she thinks is a killer - one she thinks knows she knows he's a killer.

The plot of Dark Pursuit spirals downwards from there, including several instances where a beleaguered Kaitlan shouts at her grandfather that this situation she's in is real life, not a book...which made me cringe every time she said it. If you don't want a brain damaged, miserable human being who threw you out of the house years ago and swore never to see you again treating your problems like it's the plot of a novel, then you might consider choosing a savior who's not a damned author.

Ugh. There were so very many stupid things in this book, idiotic choices and ideas, incomprehensible actions...like after running in terror through the dark streets and woods to hide from a man you're sure is going to kill you if he catches you, getting hit by a car, and finally making it to safety, perhaps running back to your apartment for your shears so you can go to work the next day isn't the best of ideas. Just a thought.

And even if the plot wasn't predicated on such ridiculous grounds, the characters Kaitlan and Margaret were two dimensional, overly emotional, and very poorly defined. Darell, for all that the idea of him catching Craig was laughable and the attempt to do so poorly written and ill conceived, was the most complex of the characters. I will give Collins credit there, I found Darell's internal struggles extremely compelling as he grasped hopelessly for what he lost, for the man he used to be, knowing all the while how far he'd fallen, despite the fact that he was sort of a bastard his whole life because of it. That aspect of the book is what garnered the second star in my rating, though the absurdity of the final conflict and 'twist' at the end almost stripped it right back.

I'm not trying to say that Collins doesn't possess the ability to tell a tale. I actually believe the opposite to be true. Despite the issues I had with it, I read Dark Pursuit in total and I don't feel like it was time totally wasted. She exhibits a sort of artistry stylistically, and again, I was very impressed with how she dealt with Darell's mind fuzzing in and out. Also in her favor, I was aware when I started this book that it was a Christian fiction, but the religion didn't impinge on the book, nor was it in any way preachy, even when the subject of abortion was raised. That may be better news for some than others, but I was glad for it.

I feel some real regret for not being able to enjoy this story, because I do appreciate Collins' narrative style, but after disliking both of the two books she's authored that I've read, I won't be checking to see if she's gained a better grasp of the most basic necessity in fiction in her future endeavors...to make sense.