Too Dry for Me 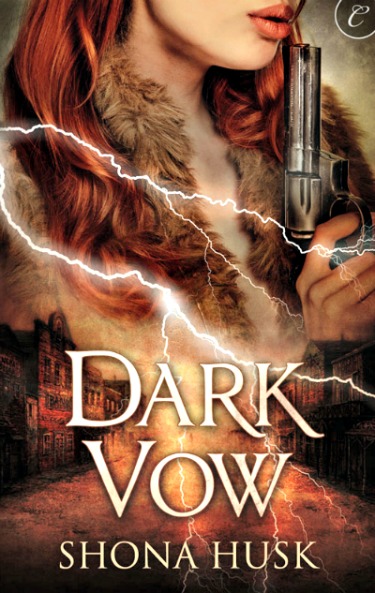 She was never supposed to do it. Jaines Cord should have very politely refused any orders for the Arcane Bounty Hunter. They were too dangerous. Too deadly. It is harder to refuse, though, when the dangerous male is standing right in front of her in the gun smithy she works with her husband. Even so, the Bounty Hunter's request for a very special engraving on a gun with a very evil feel chills Jaines to the core.

Too nervous to decline, and too mindful of the coin the order will bring, she does the engraving on that death pistol, etches it with magic that hums under her finger tips. Then she loads it with the bullets she's made. Once done, she only wants to see it and the Bounty Hunter gone.

He doesn't stay gone for long, though, and upon his return, Jaines learns the true price of her brush with the Arcane Bounty Hunter...at the sharp retort of the gun that Jaines had engraved and with the bullets that she had made.

Devastated by loss, consumed by regret, she vows to hunt down the Bounty Hunter and do to him what he did to her husband. But she can't do it alone, and when she meets Obsidian, the only man still alive who can help her, she does what she can to convince him to try.

Their journey will be dangerous, and along the way Jaines will find out more about the world she inhabits and the woman she is than she'd ever imagined. At her fingertips is the chance for a forever and a life she'd never dreamed with a man who could be everything. If they live long enough to grasp for it.

Husk impressed me here with a completely original read set in a unique and imaginative - if grim - world. I don't often come across books that just aren't like anything else I've ever read before. This one is. It read almost like a cross between post-apocalyptic science fiction, fantasy, and historical western. An odd combination, but it worked for this story.

I wish the main character and the narrative had held equal appeal. The telling of the story, from Jaines' perspective in first person point of view, seemed a very dry and often emotionless rendering of events. She certainly has reason to be emotionally damaged after losing her husband, so part of the problem may have been that, but even after some of the grief is processed, Jaines never really emotes well enough for me to connect to her on an emotional level and I never really felt anything deeper than a shallow empathy for her struggles and story.

Obsidian, on the other hand, was great. I liked him. But he didn't show up in the story until almost the 40% mark in the book. Once he did, several good things happened in relation to the story and Jaines' character that made for a more engaging read, but that's a large portion of the book to be alone in Jaines' head with nothing to focus on beyond her thoughts and experiences as she relates them.

I did like Obsidian and Jaines working together in the story, though. I just don't think Obsidian had the character depth he needed for me to be able to embrace him as the male romantic lead. He worked much better for me as a secondary character as Jaines' partner. Then again, the alleged romance between him and Jaines didn't work for me on any level or at any point, and I'm sure that's part of the reason why.

Because of the lack of emotional inflection in Jaines character, I struggled with every story element that related to her feelings, even her vow to avenge her husband, even the rage and disillusionment she says she feels as truths come to light later in the story. I kept feeling like I was being told she felt things, but couldn't quite believe it given the passionless narrative.

The story itself, though, the plot of the book, was solid and imaginative. The world was unique. It's a dry and grim world and women sure aren't considered equal citizens among the general populace, but it would work really well as the backdrop for a series. I'm not sure if it's intended to become one, though. I'm also not sure I'd want to continue in it if it were, especially if there weren't some significant changes in Jaines' narration or didn't have a different narrator entirely. She's just too dry for me.

That fact, and the complete fail of the romance, is what most limited my full enjoyment of this read. The solidness of the story and the uniqueness in the world and mythos just couldn't balance out those two issues enough for this to be more than an okay read for me.