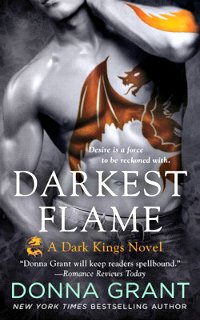 Note:   Though I read this book in its series parts (1-4), I couldn't figure out a way to review those parts individually without making myself nuts, so this review is for the book as a whole.

Disclosure:   An ARC of parts 1-3 of this book was provided to me by St. Martin's Press via NetGalley.

When MI5 agent Denae Lecroix was sent on a mission to infiltrate Draegan Industries, she knew something was off with the assignment. She just didn't know how off it was until her partner turned on her and tried to kill her after they'd pushed deep into Draegan's land. That betrayal cut almost as deeply as the knife wound she took before she...ended the partnership.

Waking up from a sleep that spanned over a thousand years to find two humans battling to the death in his cave, Dragon King Kellan was so surprised by their trespass that he was able to curb the instinct to kill the interlopers.

And he remembered his responsibility. Good thing for the surviving female that he did, too. No matter how much he loathed humans, a race full of murderous, wretched betrayers, his word was a bond, obligating him to take the surviving human female to the King of Kings before he could wash his hands of the race and sleep once more.

What Kellan learns when he takes Denae to his King changes everything. With old enemies allying with humans and the Dragon Kings being targeted in a way they have never been before, their fate could very well rest in the hands of one not-quite-dead MI5 spy and her willingness to embrace a world that she couldn't have ever dreamed existed alongside her own.

It was nice reading a spin-off series opener that truly didn't require me to have read the series from which it spun. Grant did a really nice job introducing the Dragon Kings and their world in such a way that gave a nod to what came before, but didn't depend on it too heavily. There were a few scenes that would probably have had more of an emotional impact on me if I'd been familiar with their backstory, but nothing that confused me or made me feel lost.

There were several elements of Denae and Kellan's story that I liked quite a lot, and a couple of characters (Rhi especially) who endeared themselves quickly and deeply. I also thought the world and backstory were well-conceived, the history of the dragons tragic but, odd as it may sound, believable, and the dynamic between Dragon Kings, humans, and Fae - both Light and Dark - was fascinating. It all meshed together well and provided a solid framework for the story's foundation.

Those were all lovely pieces of the story puzzle, but I can't say I was completely won over by the way it all came together. There wasn't quite enough focus on a cohesive plot for me and too much of the story got hung up on Denae and Kellan's attraction to one another to the exclusion of other necessary story elements.

Instead of laying groundwork for the arc of the series, or offering a sophisticated evolution of characters and story, too much of the narrative was spent telling me again and again how smart, strong, independent, gorgeous, etc. Kellan found Denae (despite his hatred of humans) and how unimaginably sexy and fierce and amazing Denae found Kellan. Unfortunately, there wasn't a whole lot in the story that evidenced either of those things to me as a reader, so it came off as a repetitive Tell versus Show situation unsupported by the reality of the content.

There were a few opportunities for plot progression, and scenes that made me think the book was getting into the nitty-gritty, especially during battle scenes or moments of suspense and tension. Instead of broadening and expanding on those points of conflict, though, the scenes tended to start and end quickly and were very sparse in description or definition. And far, far too many elements were introduced as teasers that never got anything even approaching explanation, let alone resolution.

Rhi's former relationship with a Dragon King. Con's hatred of Ulrick. And Rhi. His questionable actions in the past and conflicted ones now. The Silvers. The identity of the Bad Guy. Why that Bad Guy wanted Kellan. The MI5/Dark Fae alliance. Tristan's transition into a Dark King. The impact of human mates on the dragons. The dissension in the Kings' ranks.

And that's just off the top of my head. There were more things, sources of conflict or questions raised, that added to the pile of things that remained completely unresolved or unanswered by the end. The only thread that was resolved, in fact, was the relationship between Denae and Kellan.

Unfortunately, as characters, I couldn't quite garner much more than ambivalence for either of them. Their story just didn't give me enough reason to do so. Denae was too inconsistent. She kept reminding Kellan that she could handle herself and was a well-trained spy, but I don't recall many instances after the initial fight with her partner where she acquitted herself well in that regard. In fact, she had to rely almost exclusively and more than once on Kellan's help just to survive with both mind and body intact.

Kellan, on the other hand, was perfectly consistent...a perfectly consistent jerk. Between his oft-mentioned hatred of the human race and his unmitigated sense of superiority, I found him hard to take in the first half of the book and only marginally more palatable in the second.

There was a scene where he completely dismisses Denae's grievous personal losses because, as a dragon, his are so much more significant - then he jumps her for some wild monkey sex. That pretty much slammed the door closed on any lingering feelings of sympathy I had for him, and it severely damaged my respect for Denae's strength of character, because though she called him on his insensitivity, she sure doesn't hold him off or demand an apology for his galling opinions. He's apparently just too awesomely male to resist, regardless of his crappy attitude.

Adding in my issue with the too-abrupt (for my tastes) relationship timeline, and the romance elements of the story didn't work so well for me.

There were definitely parts of this book that shined brightly, but they just weren't given enough room to really gain a toehold in the narrative. Those good parts were fresh, original, and eminently entertaining, but neither the romance between Denae and Kellan nor either character individually worked well enough for me to convince me to stick around to see if all those teasers eventually get explained or all the unresolved issues eventually get their resolution. At best, this was an okay read for me overall, but not one I wish to follow up on with future books.

Return from Darkest Flame to One Good Book Home