Solid if Not Spectacular Paranormal Romance 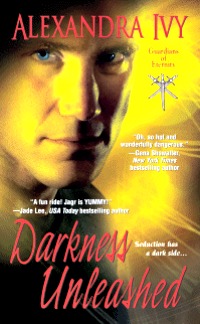 Darkness Unleashed gives Jagr, the vicious and borderline personality-disordered recluse vampire introduced in Darkness Revealed (Guardians of Eternity, Book 4), and Regan, the recently free, life-long victimized captive of the imp Culligan - and one of the four genetically altered were siblings (sister to Darcy, the Anasso's mate, who we meet in Darkness Everlasting (Guardians of Eternity, Book 3)) - their turn to find an HEA, if possible.

I admit, the premise of the Guardians of Eternity series as a whole isn't the most original and there's not much that sets it apart from the legion of other series in the paranormal romance sub-genre. That being said, Ivy does pen sympathetic, amusing, fun, frustrating, and challenging characters...and vile villains, too, actually...that you feel for - either to root for or to despise - through the book. And not every paranormal romance manages that with me. Darkness Unleashed in particular had a lot of really good interplay between Regan and Jagr. They were yummy and fun together.

Also, the series seems to lack (or I've missed it) an overall arc or goal that holds each of the books together (like J.R. Ward's BDB series, just to name one). This series is more akin to a less intense version of the Immortals After Dark series (Kresley Cole), in that it seems to rely on character connection and relationships to link the books, instead of a well defined overall arc. That's an observation, not a complaint, actually, as I enjoy when I can catch up on the characters I've fallen for in previous books, like Levett the diminutive gargoyle (though, admittedly, his characterization seemed a bit off from previous books), Darcy and Styx, etc. In fact, it's one of the draws of the series for me, so I wish we'd seen a wee bit more of it in Darkness Unleashed. Or, in one case, less.

There was a fair bit of Salvatore, the King of the Weres in this one...and he's always struck me as sort of a self-serving and abusive dictator so that wasn't really a plus (nor, unfortunately, was the preview of the next book in the series which appears to be Salvatore's book - I sincerely hope I'm mistaken).

All in all, Darkness Unleashed was fun. Hell, the whole series is fun. It's a light read, sometimes loving and most of the times witty, with sarcastic and strong characters that I enjoyed spending time with. And really...that's what I look for. I recommend the series to anyone who enjoys light paranormal romance series without any truly dark story lines or gruesome detail (though there is violence, most of it isn't gruesomely described), but I'd start at the beginning. There's just too much character crossing to merit considering any book in the series a stand-alone.

Return from Darkness Unleashed to One Good Book Home