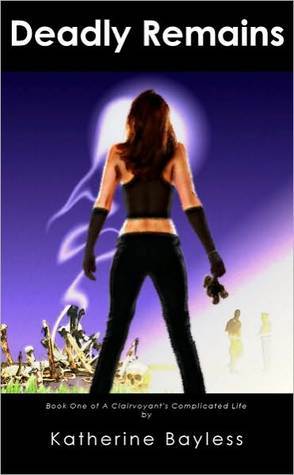 Lire Devon has adapted to circumstances that force her to live a difficult life. Unable to have direct physical (skin on skin) contact with people or things without suffering a psychic backlash that could put her in a coma, she's incapable of even leaving her home without planning for what, to some, would seem like a debilitating disability. She's accepted those requirements, come to to terms with both her limitations and her abilities, even as she occasionally yearns for a more normal existence. She's a clairvoyant in a world where some normal humans fear her, where just walking into a coffee shop with her long gloves on gets her stares of disgust and a wide berth given to her. She can't even count on being served when she sits down at a restaurant table.

Unfortunately, bigotry and paranoia, fear and disgust are rampant in normals - even in her own family, where her gift caused a rift that estranged her from her mother and sister for most of her life. But she lives with that. She accepts that. Because at the end of the day, Lire Devon has a gift. And that gift has given her a successful business and enough money to live comfortably for the rest of her life.

Not content to rest on her laurels, she occasionally offers her talents to the police department pro bono. She's one of the few psychics in the country who are strong enough to do so without burning herself out. When a brutal murderer of psychics turns serial, Lire is called in to assist, and she's quickly drawn into unfamiliar and terrifying territory. As if a psychopath isn't bad enough, demons and secret societies are jockeying for power, normals and psychics alike are little more than pawns, and prophecies tilt her in directions she didn't even realize exist. But when the psychopath turns his attention to Lire and starts leaving her personal notes at the scene of a vicious crime, she starts to wonder if this case will call more than her skills into question - and if the answers will cost her her life.

Kicking off a new series, Katherine Bayless has created a world full of potential and a heroine with unique and fascinating obstacles. For me, the strongest parts of the book dealt with a sobering and realistic look at Lire's limitations and the myriad of things she does, as well as the strength she has to have, just to cope. The serial killer plotline doesn't exactly break new ground, but it was disturbing enough and written well enough to maintain my interest, as was the relatively nice counterpoint of the romance thread. The killer plotline went a awry towards the end, when the additional complications of the mysterious "they" and some nebulous prophecy stuff muddled the storyline unnecessarily and engendered a few scenes that were supposed to be emotional but fell a little flat for me, but it wasn't bad, really. Mostly I was left feeling pretty ambivalent to the climax of the conflict, because there were several earlier scenes that had greater physical and emotional consequence to Lire and were more tightly and tensely written.

Sometimes, as in the case of Deadly Remains, it's not what is lacking in an author's style or abilities that hampers the story, but what is overdone, and in this case, a significantly trimmed narrative would have benefited plot, pacing, and impact. There was an extreme amount of excessive and superfluous information. Way too much needless description of anything and everything that Lire thought, did, was, or saw was written out in plodding detail that not only caused the flow of the book to meander and lumber aimlessly at times, but robbed the narration of any sense of danger or urgency and made several scenes seem repetitive. That seriously impacted my emotional investment and connection to the characters and the story - to the point that I found myself feeling bored several times as I was reading. I was too busy being inundated with minutia.

Besides the minutia, there were entire scenes that served little to no noticeable purpose and distracted from the arc of the book. Even the dialogue between the characters seemed overwritten at times, especially as the relationship between Lire and Vince was sputtering in its attempts to heat up.

There were a few moments that really shined, and things that I did genuinely enjoy. I loved Red, and would have adored spending more time (from an earlier point in the book) with the djinn. I found them fascinating, and felt Bayless did a great job introducing them and differentiating them. Lire wasn't a bad heroine, either. A little uninspired, maybe, but she wasn't bad. I found Vince's character definition to be a little cliched and two dimensional, but he wasn't by any means offensive, either.

Had this quite lengthy book been trimmed by about a hundred pages, some of the muddier aspects cleaned up, and much of the plot tightened and intensified, this could have been a truly spectacular and original urban (with a stress on the urbane) fantasy series debut. As it stands, it's not bad, it just didn't leave me slavering hungrily for more.