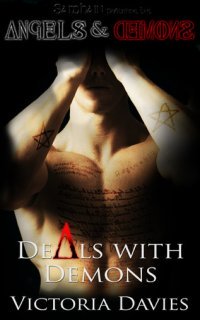 Talia was fourteen when a demon broke into her family's home and murdered her parents and her siblings. She escaped because she felt him, knew his intent, and managed to get out before he caught her. Alone and devastated, it was another demon who rescued her. Devlin took her into his home and explained her gift to her. She is a sensitive, a human born with the ability to sense and track demons. He trained her to fight, educated her, and took care of her.

On her nineteenth birthday, she asks for only one thing - him. But sometimes getting what you want doesn't end the way you hope. Heartbroken and humiliated, Talia fled from Devlin and for six years stayed far away from the one who once held her heart. Until the night he shows up at her home with the news that he's found the demon who annihilated her family and offers his help in destroying him...in exchange, he wants one more night with her.

Once she gave him her heart and was almost destroyed. Making this deal with this particular demon may just finish the job.

Short and to the point, Victoria Davies doesn't waste much time in this sexy little novella. It's lacking in a lot of world building and explanation, doesn't inform the reader on the origin of demons or the define the line between the good and the bad, and it doesn't explain the scope of Talia's gift or build up her hunting, and I still don't know how she makes a living at it, but the length of the story is closer to the shorter end of the spectrum for a novella and the story had to be bare boned to fit in enough to feel for the characters.

And in that case, it was successful, even though the discord between Talia and Devlin and the conflict that split them apart six years ago wasn't handled in the most deft or subtle of fashions. The narrative surrounding that particular plot thread tended to be quite heavy-handed, reminding the reader again and again through the tale that something bad happened but withholding exactly what that something was. As a result, finding out what happened was frustrating for being way too simple for all that buildup, and was not really all that surprising. Other than that, the conflict with the bad demon seemed to get dealt with relatively quickly and painlessly and seemed a bit anticlimactic in the grand scheme.

On a more positive note, I enjoyed the relationship between Talia and Devlin. While the conflict wasn't all that much of a surprise, I felt for their plight and the years lost, and can understand how the break up happened. I also thought the characters' emotional reactions felt organic and natural to their definition. The narrative - while condensed and light on exposition - was smooth and technically well written and the characters were sympathetic. I don't fully understand how Talia's sexual awareness had gotten so evolved given that Devlin was her only lover and it ended badly, but I could deal with that and the sex scenes were a nice balance of graphic, adult language and tasteful detail.

A novella of this length has to find a way to incorporate sufficient backstory, mythos, and character development to be completely successful, and Deals With Demons doesn't quite hit big on all counts, but it was still a solid, enjoyable read. Personally, I liked Devlin and Talia and would have enjoyed reading a more protracted version of their story.

Return from Deals With Demons to Paranormal Romance Genre

Return from Deals With Demons to OGBDA Book Reviews Home