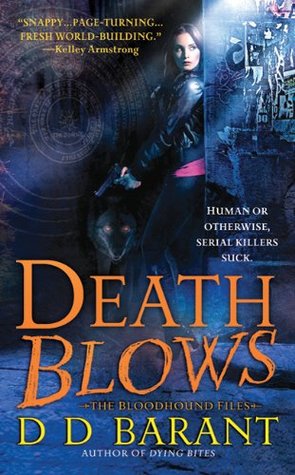 Jace Valchek is a criminal profiler - she does crazy for a living. The fact that she was yanked out of our world by some major mojo and dropped into an alternate earth where the human population is a measly 1% and the other 99% are things that go bump in the night doesn't change that. She's stuck in this alternately fangy world, working for the NSA until she can track down and catch a human terrorist out to take down the large vampire (hemovore) and lycanthrope populations so the humans can stage a resurgence. Of course, catching the guy might be a bit easier if she wasn't being pulled away from the hunt to consult on other cases every time she turned around. Cases like the murder of a pire (vampire), found green, skeletal, sparked with lightning...and dressed up like the comic book hero Flash. And you thought your job was complicated?

The second installment of The Bloodhound Files series is just as extraordinary (in every sense of the word) as the first, Dying Bites, and in a lot of ways, just as complicated. This one throws in a very confusing (for me) plot of metaphysics and comic book mythos that I found perplexing and a bit difficult to wrap my brain around at times, and yet the power of personality of the lead character, Jace Valchek, and a strong supporting cast of ultimately unique secondary and ancillary characters lift this book into a realm of must read for me.

I'll admit, a group of comic superheroes getting slaughtered for nefarious and ultimately confusing purposes as a result of an event that happened fifty-odd years ago isn't exactly a familiar or comfortable plot for me to easily grasp, but I like Jace so much, and am so impressed with the world D.D. Barant has created here, that the plot isn't a driving factor for me. The book is well written and the plot quickly paced and there is enough tension and danger to keep me entertained, so if I didn't totally love the comic book/metaphysics part of it...or...um...totally understand it, I'm okay with that.

I'm fairly certain I'll read anything that has Jace and her partner/protector Charlie (golem enchanted with the spirit of a Tyrannosaurus Rex) matching wits and trading barbs. By far my favorite secondary character of the series, Charlie is a fantastic straight man for Jace's wisecracking and their dialogue is compelling, witty, and funny. Another favorite character is Cassius, head of the NSA and Jace's boss, who is an ancient vampire with the body of an 18 year old California surfer. Other familiar faces are back, as well, like Gretchen, the now pregnant vampire and one of Cassius' top agents, and Dr. Pete, the thrope who saved Jace's life in Dying Bites. More than once.

This is an intensely intelligent series, well written and delicately layered with an intricate world building that is revealed to the reader in delicious bites, instead of being overdrawn or forced. The narrative was a little odd for me in this book. I don't remember it from the first book, but this one is told in first person present tense, and while I'm definitely used to first person narrative - especially in the urban fantasy genre - it's usually first-person past tense so every once in awhile the lack of familiarity with that particular POV nudged me out of the story and I started thinking about the words instead of experiencing them. That would have seriously affected my opinion of the book if I wasn't so enamored with Jace and her new-found but fangy and sometimes hairy friends. There just wasn't anything significant enough to make me do anything but totally love this book and yearn for the next as soon as possible. Now would be good. I really hate waiting.