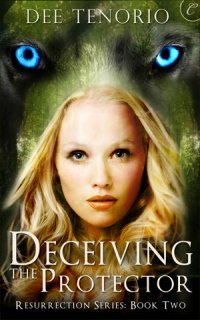 Disclosure: An ARC was provided to me by Carina Press via NetGalley. This rating, review, and all included thoughts and comments are my own.

His kind have been hunted since humans became aware of their existence. Jensen Tate is a lawyer in their world but among his own kind, he's the alpha's brother and second, a wolf shifter and protector of his people. With shifter numbers decimated by federally funded death squads, and entire cultures wiped out as packs were destroyed, the Shifter Underground has stood as a beacon of hope and a trail to safety for strays everywhere. A dangerous road, maybe, but one that leads them to sanctuary. To Resurrection.

But evidence is pointing towards a grim truth. The Underground has been breached and a serial killer is slaughtering shifters along its carefully guarded trail of safe houses. Tate doesn't know who is responsible, but the Sibile has sent him out to track and help a stray to a safe house. The oracle is convinced that guarding her will lead to some nebulous treasure. Problem is, the stray Lia Crawford wants nothing to do with Tate or his protection, obviously doesn't trust him, and isn't afraid to go nose to snarling nose with him when he tries to convince her to do just that.

Lia's got a good reason to keep Tate at arm's length, several of them, in fact, not the least of which is the attraction she feels for him. That alone could see him dead. If Tate ever discovers the darkest of Lia's secrets and the cost she's paid to keep them, more than just Tate's life will be forfeit. The longer she spends in his company, the closer they become, the more determined Lia is to protect the protector. But with a serial killer tracking them and the government hunting them, safe is a luxury neither Lia or Tate have, and sacrifice may be the only option left.

I'm always a little hesitant to read a series book if I haven't read the book(s) preceding it. And...uh...by hesitant I mean I usually avoid it like a vamp avoids sunlight. It upsets my completely anal retentive, OCD-esque linear mentality to embarrassing degrees and often makes it difficult for me to connect to the story. Not only that, but its not uncommon to have books that just don't read well at all unless you've read the preceding book(s) in the series. Despite that hesitancy, as I haven't read the first book in the Resurrection series, Tempting the Enemy, I thought I'd give this one a try. I figured if I went into it expecting to have some issues with this book, those issues wouldn't be such a big deal. Plus it's a paranormal romance, and that's a favorite subgenre of mine, so I was tempted into risking it after reading the story brief.

I loved the world Tenorio's created here. It made so much sense! Don't get me wrong, I'm all for the willing suspension of disbelief, but come on, we live in a time when a gay man could still be a victim of a hate crime for who he loves, an African American man still faces discrimination because of the color of his skin, and a Muslim man is persecuted because of his religious beliefs. Not that much of a stretch to figure a wolf man would be hunted to extinction and/or prostituted by science for the good of 'National Security' if he was discovered to exist. Not a whole lotta willing suspension of disbelief needed to buy into that ugly version of reality.

In that regard, while not pretty, Tenorio's world just flat-out worked for me. And it didn't stop there. I absolutely adored her mythos on wolf shifters as it was explained here. It had such a refreshing and unique logic to it all (within the parameters of the paranormal, anyway), and there were some details provided that made me giddy as I was reading. Little things like how shifting doesn't magically heal major wounds, and could, in fact, make them worse as organs and tissue move around inside during a shift. Or how males can be slavering beasts around females going through a heat cycle, and there are some nasty consequences to females because of it. Wow - that's not only understandable, it's a biological reality for canine species. On the flip side, it is the female who ultimately chooses a mate and the male is bound by that choice. Loved that.

In fact, there was much about the world and mythos that I adored.

And the love didn't stop there. Tate was a great lead character and Lia was just the sort of female character I most admire. Strong, self sufficient, and resilient, as the stuff she'd endured earned my ultimate respect. I thought she was wonderful. The chemistry between the two characters was solid, and this book had one of the most impressive sex scenes I've read in romance lately. Tenorio struck a perfect balance between emotional intensity and physical intimacy, and worked in a few threads of humor to keep it consistent with the characters' personalities and with the development of the storyline to that point. Phenomenally well done.

I did have some issues that I felt were less well done, some points that didn't go over as well as the stuff that did, and I should probably at least brush over them. The non-relationship story elements, the external conflict of the book, was a little two dimensional and simple, and was told in a very straightforward manner that didn't allow for a lot of ancillary development or many secondary characters. While the secondary characters we did meet were fine, they were few and far between and didn't see much page time. This book is almost exclusively a two wolf shifter story, that of Lia and Tate.

That actually plays into another concern I had while reading. The focus of the book was very narrow. Beyond a flashback or two and an epilogue, the time frame for the entire book is just a couple of days, so the story ended up feeling a bit more like a snapshot of the road trip from hell than a fully developed and self-contained book. I would have preferred a bit more flesh on the bones of the story and a broader view given to some of the elements in it. Though I loved the evolution of the relationship between Lia and Tate, the rest of the book didn't offer quite enough exposition or explanation of what led up to Tate going after Lia and how Lia got there to begin with. I would have liked to have found out what exactly Lia's role has been for the two years she'd been out of captivity. Given the pretty horrific casualties, a better explanation of how she fit into the master plan would have been helpful.

There was also a plot hole concerning Lia's scarf that niggled at me as the book ended.

We're told that Asher gave Lia the scarf she'd made for Laurel to prove that Laurel was being held. Later Asher says he killed Laurel and took it off her then. We then find out that's not true. So how did Asher get the scarf? Laurel got away. Did she leave it when she escaped? Why? The scarf was given such significance throughout the book that I would have preferred an explanation and the lack of one generated a plot hole.

Whatever my issues, though, they were minor in the grand scheme, and while I think I would have appreciated reading the first book, and think it would have enhanced my understanding of the backstory in this one, I don't think it affected my reading enjoyment too much. Tenorio has created a world I completely admire, mythos that I find refreshing and unique, and characters I easily fell for. This book may lack a little of the complexity of plot found in some the books of some of my favorite paranormal romance authors, but what it does provide is well written and emotionally satisfying, and it has some aspects that set it apart and make it memorable. Now I just have to grab a copy of Tempting the Enemy before the next book in the series comes out. It's that whole anal retentive/OCD thing. Must. Read. From the beginning. In order.

Return to top of Deceiving the Protector