Deceiving the Witch Next Door

Too Many Negatives for Me 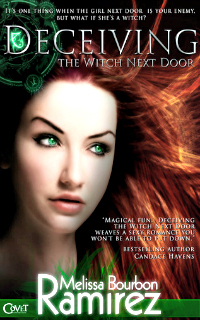 Disclosure:   An ARC of this book was provided to me by Covet publisher Entangled Publishing, LLC via NetGalley.

Eight years after leaving Bloomington, Texas in the dust, Storie Bell is back to make her mark in the only home she ever knew. She had to, she had nowhere else to go. Okay, so finding out that Reid Malone was also back in town was not the best news she'd ever heard. Not when the last time he saw her he almost caught her using her magic, and not when the memory of that long-ago night, and the incendiary moment they shared, still had the power to leave her breathless.

So she'd avoid him. That shouldn't be too hard to do, even in a town as small as Bloomington.

Reid may be stuck in his podunk hometown for now, but as soon as he helps his father find the secret ingredient to his moonshine recipe, he'll be long gone. Sure, having Storie back in town is a heady distraction, and her renovation of the old gas station next to his father's bar is putting a serious crimp in his search for that special oil her father used to give to his old man, but he's not going to let that get in his way. Memories of the night they shared eight years ago would just have to take a back seat to his father's ambitions.

He just had to find a way to worm his way into her life, and really, that shouldn't be too hard to do in a town as small as Bloomington.

I had so many problems with this book, I'm not really sure where to start. It started well enough. The flashback from eight years ago provided a strong beginning. Unfortunately it was all downhill from there. There wasn't much in the way of world-building, the characters were two dimensional, the plot was very limited, the narrative was repetitive, and the relationship between the two main characters never evolved beyond rampant lust.

The building blocks were there. I liked the brief look of eight-years-ago Reid, and I liked Storie pretty well throughout most of the book. Current-timeline Reid, however, was fairly reprehensible. Not only was he actively deceiving Storie so he could steal from her for his equally reprehensible father, the justification of his actions left me cold. This is a rich, self-made man who couldn't figure out a better way to help his crook of a father? Really? He had to take advantage of a perfectly sweet woman just trying to set up a life for herself? And he's supposed to be the hero of the book. Sorry, no.

Their relationship, such as it was, was acrimonious, so this may appeal to enemies-to-lovers fans, but for this theme to work for me, there has to be a better evolution of the characters as the story progresses and a better foundation for that evolution. All Storie and Reid had was that oft-mentioned night eight years ago. And I got sick of hearing about it. I can't even tell you how many times it was brought up in the story. Every time they so much as thought of each other, they would refer back to that night. Between that and how often Storie reminded herself that witches can't be with mortal men, the narrative seemed painfully repetitive.

And while it was easy to believe the lust they felt for each other, though the significance of that lust after eight years was a bit of a stretch, nothing in the plot at any point in the story indicated any greater depth or complexity of emotion. There just wasn't room for it to develop, no matter what readers are told. But just saying it's so doesn't make it so.

There was also a plot twist that came out of nowhere late in the book and further hampered my enjoyment of the read. The twist struck me as heavy-handed and emotionally manipulative, and instead of garnering sympathy for Storie, I ended up questioning her ridiculous decision-making. I could no longer justify caring for a character who would leave her best friend - her only friend in the whole world - completely in the lurch with nothing more than a hastily-written letter because of some inexplicable sense of responsibility to people she's never met.

Family of the heart deserves better. Her best friend and that friend's two little girls deserved better. As a reader, I felt I deserved better from a heroine of a story. And that's above and beyond how painfully contrived the whole situation seemed to be.

I was also left wondering if I was supposed to take that sweeping romantic conclusion seriously. Up until the end, the story had been consistent about the toll Storie's magic took on her, enforcing and reinforcing the fact that it was failing, that even the smallest spell drained her to the point of needing a nap. And then, after wielding some hefty mojo in the climax of the conflict, she's not only still conscious, she's able to toss around a few get-naked-now spells as she gets busy with Reid without so much as a yawn for her efforts. That inconsistency on top of the sudden declaration of previously unsupported everlasting love just put the final nail in this book's coffin.

It's a fast read, and there were elements of the story that had appeal. Storie's friend was a solid secondary character and her two daughters were precious and precocious. I even liked the idea of Storie's bookshop cafe and could have embraced the otherworldly elements if they had more definition or explanation. In the end, though, there were just too many negatives for me, and the two biggest were Reid and Storie. That's two pretty insurmountable obstacles.

Return from Deceiving the Witch Next Door to Paranormal Romance