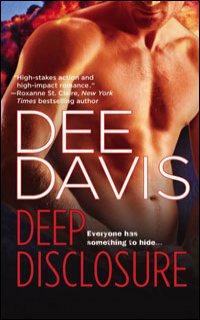 She didn't know what a normal life was, being born while her family was on the run after her father's job with a top secret government project long ago blew up in his face. Alexis Markham, of course not her real name, has lived a lifetime in the shadows, staying as far off the grid as possible. Especially after that night when she was seventeen, the night her family's house blew up with her parents and older brother inside. She's been on her own ever since, her only connection to her tragic past being one old family friend who just got out of prison.

Then he, too, is killed and her identity compromised. Just like that, Alexis Markham's life is under fire. She is forced to acknowledge that whatever her father did to bring the wrath of the government down upon her head long after his death, they won't stop pursuing her until she's as dead as the rest of her family.

Former A-Tac deep cover operative Tucker Flynn is no longer too high on the idea of being retired from the dangerous job in which he excelled. In short he's bored, cranky, and not a little surly about the inactivity. Or he was until his late morning coffee ritual turned into a truly explosive experience.

One of the lucky ones, Tucker was able to drag himself out of the rubble of what had been his preferred coffee shop with nothing worse than ringing ears and a few cuts and bruises. The bomb had been under the table of an older man he had seen sitting in the back and almost took Tucker out as well, but what really made him suspicious was the beautiful young woman he'd watched argue with the victim before storming out in a huff.

He didn't know if she was responsible for the bomb. He had no idea who she was or where she went. And Tucker had no idea just what he'd landed smack in the middle of. In fact, Tucker knew only two things: he would find her...and he was no longer bored.

Never let it be said that Davis can't write pulse-pounding action. The pace of the plot starts fast, the story hits hard, and there is little in the way of down time before the final page. I was struck several times as I was reading by the thought of just how easy it was to imagine this book made into a summer blockbuster movie. One of those bullets-flying, car-crashing, life-on-the-line thrillers that would draw in the masses.

It was also very much like a summer action blockbuster in that it didn't exactly stay close to realism - for all the bullets flying, bombs exploding, and cars chasing there didn't seem to be many cops, firemen, or other emergency personnel around. Not even any nosy neighbors despite the populated urban areas of some of the scenes. Maybe I'm weird for noticing, but some of it was so obvious and incomprehensible in its absence that it pulled me out of the story, like when a massive shootout at a residence doesn't draw any police scrutiny and the house isn't a crime scene when the owner returns...only to engage in another shootout.

Davis did a great job setting up Alexis as a completely sympathetic heroine. I could easily empathize with her solitude, loneliness, and fear, but enjoyed her strength and willingness to jump in and help her situation in the face of dire threats and dangers. Tucker, too, was a solid action hero-type male lead. He played the truth fast and loose, true, but was a good guy even with some murky motivations. They worked well together.

What I wasn't completely sold on was the romance thread. With such a fast plot, there just wasn't enough time or attention given to the relationship evolution for me to really embrace and enjoy the intended chemistry between them. I also wasn't convinced that Tucker had truly resolved his issues with his past relationship before he suddenly was claiming deep emotion for Alexis. The lack of development in the romance just didn't provide the necessary evolution of Tucker's emotions for me to really believe in their HEA.

I haven't read previous books in the series, so it's entirely possible that I would've understood more about the enemies of A-Tac and been more engaged in the danger they possessed as they moved in the background of the narrative. That lack didn't prevent me from enjoying the primary external conflict of Alexis' storyline, but I think I missed a lot of the significance of the characters working against them all. It's just a feeling I got while I was reading.

The resolution to the primary external conflict was jerky and abrupt, and the end was heavily laden with an emotional resolution between Alexis and Tucker that I don't think was supported by the story. I can't fault the action that pounded throughout the book, though.

The action is top notch, the plot had a few issues, the story lacked some plausibility, and the romance didn't work for me. All in all, the book had its good points and its less good points, but for me it all boils down to this: a romantic suspense can only work for me when both the romance and the suspense work, or if one is so superlative that I'm more forgiving of any lack in the other. This one didn't quite fall into either category. Part of that is probably the fact that I haven't read the preceding books in the series. A small part. The rest is what it is.

Return to top of Deep Disclosure