Deliver Me from Darkness

Shows Potential for the Series 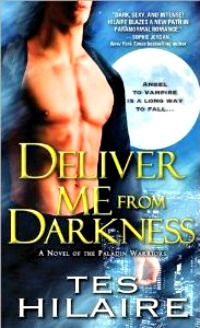 When Roland opens the door for his best friend, Paladin Logan Calhoun, and sees the filthy bundle of unconscious young girl in his friend's arms, he can practically see his calm, orderly life blowing sky high before he's even closed the door behind them. When Calhoun dumps the girl on his pristine bed and begs him to take care of her for a few hours, Roland kicks himself for not closing the door in their face. And when she wakes up after Calhoun leaves and sets about touching or destroying everything she gets close to in her haste to flee from him or attack him without bothering to listen to him explain that she's safe, he's rethinking his pledge not to eat her.

But the former Paladin hasn't fed from an innocent for many long years, not since Calhoun spared his life when he was sent to kill him after Roland was made a vampire.

Now this waif-like ball of terror named Karissa Donovan is his responsibility and desperately needs his help, however much she begrudges and fears his existence. She is a miracle, though she doesn't know it. She is the last known female Paladin in the world, and as such, will be valued above all else among the dwindling number of Paladin warriors who would claim her.

For Roland, she is something else entirely. Through some twisted and cruel turn of fate, this sweet-smelling waif is his bond-mate. One he can never make his own, even as every cell in him cries out to do so. For although Roland could easily pledge his heart to the woman who is supposed to be his other half, the sad truth remains, as a vampire, he no longer has a soul to join with hers to complete the bond. And that's the damnable misery of it all.

I wasn't totally sold on this series debut from Hilaire. There were story elements and characters I liked, and I thought both the idea of the paranormal world and foundation of the mythos had a lot of promise. I didn't think there was much depth or content in the plot, though, nor was their really enough world building or definition in the characters. The evolution of the romance between Roland and Karissa was also a little odd for me.

Roland had a bit of a martyr complex that I didn't find all that appealing, and he could be a bit of a downer at times because of it. Still, he had good points, too, with his code of honor and his rigid discipline, and I liked him better than I did the inconsistent and oft-annoying Karissa. That little miss was so ruled by fear for the first half of the book, and such a brat about it as she threw tantrum after tantrum. Not to mention, she had a tendency to get herself into trouble by not listening to Roland, almost out of spite. There were times I wouldn't have minded at all had Roland actually eaten her.

Her inconsistency was a contributing factor in my lack of satisfaction in the romance plot line, though it's not the only one. I was a little disappointed that she clung to her fear and distrust of Roland until nearly the halfway mark of the book. It limited any significant romance evolution to the latter half, and when pared with the external plot conflict, there was too much going on around them for it to develop with much believable and organic depth of emotion.

A more detailed and expansive external plot conflict and more character definition for the Bad Guys would have elevated this book a bit for me, too. I wish the threads of Karissa's worth as a Paladin and her meeting with them had been developed a little differently. I think the Paladins are supposed to be the good guys in the series, and I can't say that in evidence during the meeting with Calhoun and Karissa. I didn't care for the Paladins at all, with the noted exception of one or two. Those exceptions, though, are part of the reason I want to see where this series goes next.

Calhoun didn't do much for me, but Valin and Alexander both interested me. And they weren't the only secondary characters who turned my head. The spunky and willful Gabriella was a great character and I want to see more of her. And the presence of all three impacted the latter half of the book quite nicely.

There were actually several things about the second half of the book that I enjoyed (beyond the romance getting its kick-start). The pacing of the book picked up and the more entertaining elements of the plot started to come together. The prophecy concerning Karissa was interesting, the action was top notch, and all the characters became more engaging as they worked together against the Bad Guys.

I can't say I was left with a big warm fuzzy at the end of the book. Yes, it ended on a high note for Roland and Karissa. That's hardly a surprise for a paranormal romance, and I liked their Happily Ever After moments. A few significant threats to the Paladins' continued existence are still hanging over their heads, though. Given how this book ended, I'm not sure exactly how the Paladins will face that crisis going forward. I'll be finding out, because while several aspects of this book weren't quite as pleasing to me as I had hoped, other parts - most notably a handful of secondary characters and the potential for their stories - has me interested in seeing how the series continues from here.

Hold on a sec, what about Alexis Morgan's Paladin series? Is this the same series?

Morgan's Paladin of Darkness series has few elements in common with Hilaire's Paladin Warriors. Most notably, Hilaire's Paladins are more connected to some version of Christian mythos for God's warriors. And there are vampires and demons in it.

In Morgan's series, where there never really was an explanation on where the Paladins came from (nor much of an explanation of anything else, either in the 4 books I read), the Paladins are used more like a paranormal military operation to fight the "Others," creatures from a connecting dimension.

Paladins. They're the new black.

Return from Deliver Me from Darkness to Paranormal Romance Genre

Return from Deliver Me from Darkness to OGBDA Book Review Home