Talk About Your Complicated Relationships 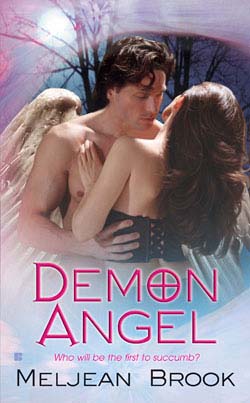 Eight hundred years ago a seventeen year old man - and seventeen was a man back then - met a woman...considerably older than he. He was captivated by her. She was intrigued by him. Damned by a combination of his integrity and raging fever for her, events are set into motion that led to his death. Her frantic unwillingness to let him go led to his ascension from human to Guardian. He is Hugh, formerly human, now a warrior for Above, walking the earth and ridding it of the darkness that are the creatures of Below. Like demons. Like the woman who damned him, then saved him. Lilith.

For eight hundred years they dance to a wicked tune, he intent on saving her, she certain she can't be saved. Both craving each other, dedicated to each other in a way that they aren't to their respective callings. Hugh's side, Above, has been tolerant of his inability and unwillingness to kill Lilith for all of his years of service, but Lilith is Lucifer's daughter...

Two people in impossible positions, unable to be together, incapable of being apart...and a whole lot of baggage on both sides. Not to mention the relatives. Then there is the war Below between Belial and Lucifer, the nosferatu killing vampires and performing heinous rituals, and the Guardians Ascending Above en mass. For Hugh and Lilith, finding any sort of happiness is going to be hell...literally.

With extremely intelligent writing that creates and supports a complex and layered plot, with complicated and conflicted characters and a wealth of breathtaking world building, with unparalleled originality and imagination, Brook has taken a swipe at the paranormal romance genre, gripped it by its throat, and choked it until it begged for mercy. There are so many twists and turns, Machiavellian schemes and insidious conflicts, power struggles, bargains and lies, such a desperate struggle for survival and redemption, for peace, for love, that I was often in awe of the power of it all.

Demon Angel is a strong, moving, sweeping masterpiece with nearly unlimited scope and import. It's told with a delicate attention to detail and grace that forces the reader to connect with the characters and experience with them the full spectrum of emotion - despair and hope, resignation, fear, love, lust, fury, failure and triumph. It's not always comfortable, it's never easy, but it is at turns breathtaking and tragic, fulfilling and broken.

My only complaint...not that I would call it that, exactly...is that at times there was so much going on and so very many conflicting machinations and motivations and deals with the devil that I felt the plot got a little muddy, and the pacing of the narrative slowed when that happened. This is a book that has everything but the kitchen sink in it as far as plots go, and perhaps it could have been a bit more tightly paced if it had been a bit less encompassing, with a few less twists and turns. I hesitate to suggest that, because perhaps that would have robbed the book of the very traits that make it stand out so dramatically. I can't deny, however, that there were a few times that I struggled with the narrative, most notably during quick scene changes and abrupt plot developments, where I had to either reread a section or wait to have something explained further along. It disturbed the flow for me a bit.

That being said, I truly enjoyed Demon Angel and loved both Hugh and Lilith. I've not often read characters as layered, flawed, and endearing for all their faults. I was captivated by their long, torturous, and occasionally heartbreaking journey and thrilled to be along for the ride. As a start of a series, Brook has hit with gangbusters, and I look forward with rabid enthusiasm to continuing The Guardians series with Demon Moon.