Didn't Work For Me At All 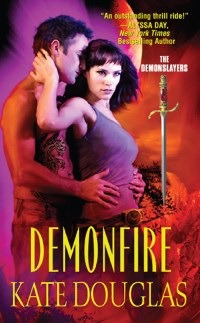 Paranormal romance and urban fantasy are my two favorite book genres. I read and I review a lot of them. I've come to realize that I'm usually pretty forgiving of minor issues or singular issues - for example, if it's a decent story but not technically all that well told, I may give it a three stars, but explain in my review what the critical aspects are. I understand and accept that I hold my favorite genres to a higher standard - rightly or wrongly - than other genres and that ultimately I want to be entertained. I believe that if I'm not entertained given that the genre predisposes me to being entertained, then there's a big problem somewhere.

I was not entertained by Demonfire.

My apologies to Kate Douglas, who I've enjoyed as an erotic paranormal romance author, but frankly, I found the characters in Demonfire two-dimensional and the narrative repetitive, inexplicable, and at times heavy-handed. Eddy and Dax seemed cardboard and flat, and unfortunately, so did the entire impetus behind their relationship. The abrupt way they were thrown together felt too contrived and put a heavy strain on my suspension of disbelief (not even Dax could understand how he got into Eddy's shed from the portal he came through, so how could I?). When those issues combined with the perplexing mythology of the Lemurians to explain Altan's character and presence, the first quarter of the book felt like a cross between a snore and a quagmire of implausibility. To be honest, the pitbull/poodle mixed-breed canine was more fleshed out with a more believable and sympathetic backstory than two thirds of the book's main characters, and that's a problem.

Dax is a former demon (now reincarnated/reanimated/newly de-demonized-sorta/former soldier boy) with a tattoo on his body that will come back to bite him...or try to again and again and again. Eddy is a human reporter who is willing to toss her job and fight demons she didn't even believe in yesterday. No convincing and little to no explanation needed. She finds out her touch soothes Dax's demonic curse...with no explanation and little to no coherent reason given. Altan is the ancient Lemurian who gave up his millennia-old and immortal life in the caverns of a currently inactive volcano (or other dimension...I wasn't too clear on that - could be both, I suppose, though I'm not sure why the volcano would exist in both dimensions). The parts of the story concerning that race and Altan's decision was anorexic in plot and very nebulous in the narrative, and I had a big problem with Altan's excellent grasp of modern American vernacular, technology, and cultural references, considering the written mythology. Toss in the dog Bumper, a will-o'-wisp Tinkerbell-sort Willow (my favorite character through most of the book), and Ed, Eddy's father (by far the most interesting and believable character) and you have the core group that fights the big bad demons...who really aren't so big or bad, given that they're animating garden gnomes and other kitschy lawn statuary...except for the gargoyle - but you'll have to read that for yourself.

The problems with the book aren't just in the characters. The world Douglas is trying to create here never really snapped into solid focus for me. Too many shifting descriptives and inexplicable happenstance. The book's main conflict, the threats of the big bad and smaller baddies was bizarrely non-threatening (you could've had a "no humans were hurt during the writing of this book" disclaimer). And then there was the repetition.

Dax was given a human (sorta) body for one week to fight the demons slipping from Abyss. After the protagonists get together, the book counts down the rest of Dax's seven days and at some point in each one of those remaining days the fact he's only got six... five... four... three... two days left is given a lot of room in the story to explain in mind-numbing detail just how sucky it is for all concerned that Dax only has that much time left. And this melodrama went on each and every day, over and over and over again. Repetitively.

I don't think that's compelling plot, nor do I feel that it engenders any sense of true tension, because as the reader I know going in that it's a paranormal romance and Dax and Eddy are going to get their HEA. Otherwise it'd be called Shakespeare. Lamenting for page after page about them being separated for eternity just becomes tedious and (dare I be repetitive?) repetitive. I've read excellent paranormal romance series that deal with this subject and it's always the ingenuity and originality of how the leads get their HEA that impresses me. I already know they're going to. So by the end, when I was at least hoping for a glimmer of originality in the way Eddy and Dax stay together, I was ultimately disappointed again. I won't give spoilers...but it was just...not well done.

So why the two stars, given how much it sounds like I hated it? Because I didn't hate it. Maybe I was too ambivalent about it to hate it. Maybe that's worse. But mostly the two stars are because there were a few tiny glimmers of hope. Kate Douglas does write reasonably sensual sex scenes, and what little chemistry there was between Dax and Eddy shined brightest during them. I think it's hard sometimes to go from writing erotic novels to toning down the sex for a mass market audience, and I think that Demonfire was well represented in that regard. I think some people are going to think it was too graphic or explicit, but I'm not one of them. I also sort of ended up liking Altan. I still don't get why he talked in such a modern and culturally human fashion, but I thought he was sort of endearing with the sword that refused to speak to him and the crush he gets on Ginny. And that is why I will give Kate Douglas another chance. The second book in this series is due out later this year, and according to the sneak peak, Altan is off to Sedona where he sent Ginny to save her from what was going on...only to get a call that things in Sedona are even worse, as live animals are being possessed by demons and attacking their owners and neighbors and the like. And Ginny is stubbornly aware of Altan's machinations with mind control, despite Altan's best efforts. I think it sounds fun. And Ginny, for her few minutes of face time in the book, struck me as a more layered and spunky character than Eddy ever did. I'm looking forward to reading about them. We'll see.