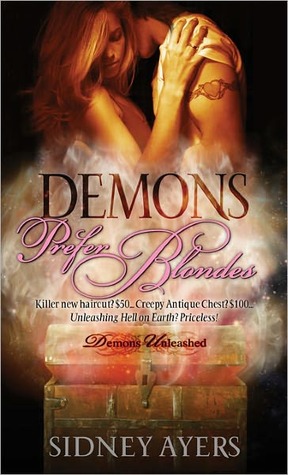 Hairstylist and beauty shop owner Lucia Gregory should have known better when her best friend Serah showed up toting the antique chest she'd gotten for a steal. The fact that she bought it isn't what bothers Lucy. That's what Serah does. She buys things. Lots of things. In this case, however, it's a creepy chest that gives her a zap when she touches it, and the Latin scrawled across the top is not exactly chock full of warm fuzzies.

More like dire warnings about grim things that Lucy doesn't believe in. Still, it gives her a chill.

That should have been enough to keep her from going anywhere near it, but Serah wanted a full translation and she wanted to see what was inside it. And Serah can be very convincing.

Rafael Deleon has kept himself away from the realm of Earth, choosing instead the solace of Limbo after his last debacle with the fairer sex a couple of hundred years ago. He's given little choice by the council of Fore-Demons, though, when they find out the Arca Inferorum, the chest that keeps contained some of creation's worst demons, is no longer being protected and has popped up on Earth. Rafe is tasked to recover it before it can be opened, despite his misgivings about returning to the mortal plane.

Tracking it to the beauty parlor only leads to frustration. The chest is gone, but he meets the owner, Lucy Gregory, an appealing ball of attitude and latent demon power. Not even close to what he was expecting. Still, maybe he shouldn't have let her out of his sight once he'd sensed her, even after she told him to leave her business.

Before Rafe can follow the chest's trail, Serah has convinced Lucy to finish the Latin translation and see if they can open it. Lucy had no idea her unique heritage would allow her to flip the lid on that bad boy during the night of the lunar eclipse. And she couldn't have even dreamed the results would be so catastrophic. When Rafe shows back up at her business as the place is getting mystically trashed, spouting off about some sort of woo-woo stuff the chest can do, Lucy ignores him. Until he tells her she's half-succubus. And that she just released a bunch of nasty demons on earth, destroying her precious beauty shop in the process.

She's finding it pretty darned hard to ignore all of that.

Lighter-toned paranormal romance and urban fantasy tends to be hit or miss for me, but when I like them, I like them very much. When I don't...I don't. This one didn't work for me on any level.

I found the narrative excessively wordy, the dialogue overly emphatic (so many exclamation points!), the plot lacking in focus, and the characters tedious. The first half of the book did little to flesh out the world, explain the created mythos, or progress the plotline. It focused almost exclusively on how sexy Rafe is, how much Lucy wants him, and how confused Rafe is over his desire for Lucy. Not much else.

A heavy dose of relentless editing could have streamlined the book and improved the flow of the story tremendously, but as is, the book meanders aimlessly and loses all sense of urgency, even in extremely urgent situations. Someone at risk of being killed? Characters stand on the stairs wrapped in a lengthy discussion about racing in and saving the day instead of...you know...actually racing in and saving the day. Someone kidnapped? Characters stand around looking for information on the Big Bad's motives for the kidnapping instead of...you know...actually going after the kidnapped character.

That sort of stuff drives me a little nuts.

Sudden shifts in characters' emotions with no supporting setup, story development, or explanation were also common. Rafe is offended and annoyed by Squeaky at first, then suddenly decides he likes the little guy, that Squeaky has "whittled his way in." I'm not sure how that happened, considering their starting point and the fact they spent no time together in the interim. I'm no clearer on how Squeaky, who started out noticeably afraid of Serah, suddenly turns into her popcorn-munching movie buddy and her new BFF. The initial fear was given no more explanation than the abrupt change of heart. It's not even noticed.

And Rafe is a crier. Crying heroes are not sexy.

Other stuff in the story just flat out didn't make sense to me. Developments, storyline, motivations, actions. There were times when I simply didn't understand what I was being told or where the story was trying to go. A preponderance of unanswered questions posed more problems, especially about Lucy being half succubus. Her need to feed on human males through sex was brought up often originally...then completely dropped from the story. Does she need to feed or not? On humans or not? What's her deal? So many unanswered questions.

I stuck it out, read through to the end, and kept hoping something would come together for me in the book. That some aspect of it would click for me. I ended up disappointed. I can't say I was terribly surprised. Like I said, I know that series such as this, with lighter, more comedic elements, don't always go over well with me. It was just bad fortune that more than just the lighter elements fell short for me. Everything else did too. Unfortunately, I just don't think this series is for me.