A Victim of Bad Timing 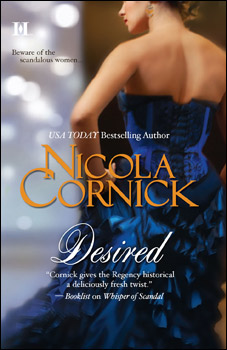 Dowager Marchioness Teresa Darent leads an absolutely scandalous life. Married three times, each at her own request, she's buried three husbands, amassed a rather large fortune, and spends her time drawing all manner of gossip from the ton. She finds it works quite nicely to keep her real actions and intentions out of public eye and off public lips.

After all, who would believe that a shallow, salacious woman such as she appears to be could be the same woman who spends a good portion of her fortune on philanthropic causes and pens the highly seditious caricatures stirring up such political unrest? Those caricatures calling for social reform were frowned upon by the Home Secretary. He doesn't know who she is, of course, but he's ruthless in his efforts to find the artist known as Jupiter and put him to death for his crimes.

A cause of action that Tess, rather obviously, has every intention of avoiding.

Crawling out the window of a local brothel she's using to hide from the men who'd broken up her most recent political meeting isn't the most calming manner of escape, especially when it isn't as successful an action as she'd hoped. Caught in an incriminating position by the handsome American who recently became Viscount Rothbury, fast talking and faster thinking just barely saves her soul. Still, she's quite the actress, if she does say so herself, and breathes a sigh of relief as she evades the man hired to discover her identity and turn her over to the Home Secretary for her crimes.

That would be catastrophic. Too much rides on her slender shoulders. But when an evil viper slithers his way into her house, spouting disgusting plans to sully her stepdaughter's reputation unless Tess agrees to allow the fourteen-year-old to marry him, Tess realizes her scandalous ways have wider repercussions than she'd realized. And there is only one thing for her to do to keep her stepdaughter safe. She's going to need a husband number four.

Owen Rothbury is rather captivated by the Marchioness. He has a few suspicions about her, and he doesn't buy her act when he catches her slipping from the bawdy house. She's not nearly the flawless actress she thinks she is. At least not to him. Letting her believe he is completely swayed by her titillating assurances, however, serves his purposes at the moment. And really, he can't argue that matching wits with the woman who, quite obviously, isn't at all the brainless female she plays at is more stimulating than he'd ever imagined. And he wants more.

He wasn't anticipating just how much more he would get when the feisty woman shows up at his home shortly after that auspicious evening and, against all propriety and several licks of good sense, proposes to him the offer of becoming her fourth husband in a marriage of convenience! Owen knows she's hiding something, something more than what lies behind the sudden desire to become a sterling member of society above all reproach.

He's got a few good ideas what her secret is. He'd never anticipated how much fun he'd have sussing it all out...sussing the lovely Tess out. Finding out everything there is to know about her. Frankly, if he has to make her his to do so, well...so be it. And has every intention of being the most inconvenient of convenient husbands. Because first and foremost, he wants Tess with a passion that defies description. Regardless of what she's involved in.

I've long accepted that jumping into an existing series without reading the previous books is risky. Sometimes it's fine, sometimes it's not, but most times it's somewhere in the middle. Desired is one of the most times.

The primary plot was easy enough to follow, but secondary/ancillary plotlines that carried over from previous books lacked sufficient exposition to draw me into some of the events as they unfolded. That disconnect was most notable in relation to Tom's backstory and his story threads in this book, but not limited to it. Secondary characters also lacked all but the most cursory definition. Had I read the books in which they were featured, that would not likely be a problem, but I haven't. It was.

I thoroughly enjoyed Owen, though. As far as his character and story went, he was both an appealing romantic lead and just a generally honorable male. Smart, savvy, and self-aware, he was my favorite character in the book and his presence as the male lead was a big positive. I was especially fond of how he treated Tess and how he comported himself in her name.

Tess herself was more of a problem. I loved her seditious little heart and felt for her causes. I admired her intelligence and dedication. I was amused at how crafty she was in dealing with the ton and her male admirers. In fact, she was eminently sympathetic and entertaining. Unfortunately, her character's backstory and its long term effects on Tess were so similar to that of Lady Kate Seaton, lead female character in Always a Temptress by Eileen Dreyer that they could - quite literally - be interchangeable. And there was more than a passing similarity to some of the story elements relating to them both. All the way down to the nude artwork.

Had there been a significant break between my reading Always a Temptress and reading Desired, maybe the issue wouldn't be as large a stumbling block, but there was just over a week between each book, with no others in the historical romance genre between them to act as buffer. Compounding that issue is the fact that I felt Kate's evolution following her horrendous past was far more natural, organic to the story and characters, and realistic in the big picture than Tess' was in this book.

Unfortunately, not even my enjoyment of Owen and my appreciation for Tess' intelligence and revolutionary ideologies were enough to hold up against that, and the storyline didn't offer enough to distract me from the similarities to lessen the impact. The overall focus of the story was on the romance, which drew attention to them instead. Other plot elements, from the fallout of Tess' philanthropy and reformation activities to her troubles with the guardianship of her stepchildren, took a back burner or were limited in development.

And not for nothing, but I really wish there had been some sort of confrontation or resolution concerning Tess' sister's behavior. I didn't like her hissy fit after Owen and Tess' announcement was made (it was realistic and believable, sure - doesn't mean I liked it), and her "confession" to Tess had a bit too much satisfied spite in it to forgive her for it without it being addressed. The lack of anything in that area bothered me.

Desired isn't a bad book. It felt historically authentic, there were some particularly nice touches in story and character definition, I enjoyed Owen very much, and Tess as much as I could. It focuses on the romance, so secondary story elements didn't get a lot of page time or resolution, but if it hadn't been for the massive similarities between Tess and Kate from the Dreyer book, I probably would have liked this book more than I did, even without reading the previous books in the series. Given the bad timing, though, this was just an okay read for me.