Left Me A Little Hungry 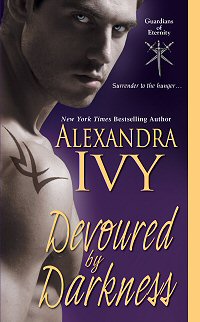 He's been trailing her, stalking her for days. He's a Charon, a rogue vampire hunter, and he's been tasked with finding the jinn halfbreed and bringing her before the Commission for elimination. Her kind is considered an abomination and against demon law. Somewhere in the middle of the hunt, however, her seductive scent has driven Tane to rethink a speedy capture and quick end to his duties. And when he runs her to ground and she whirls on him, he is both seductively attracted and infinitely intrigued by the spitting, feisty female. She's hiding something, is desperate to protect something, and Tane has every intention of satisfying both his hunger and his curiosity before he takes the gorgeous jinn anywhere.

Cornered and exhausted, Laylah comes out swinging against the delicious-looking vampire Tane. An outcast all her life and aware of the penalty of just existing, she's got nothing to lose and everything in the world to protect. With uncertain and volatile powers, she struggles to keep Tane at arms length and out of the hands of the Commission and she's willing to do anything, even bind Tane to her, to prevent him from sending her to her death. Keeping Tane from turning her over slowly starts to feel more like wanting to keep Tane with her as the truth behind her secrets uncover a plot to bring the Dark Lord back to earth...and release his untold evil on demon kind.

The seventh book of the Guardians of Eternity starts to point the series in a new direction and introduces intriguing new characters even as it picks up and resumes plot threads introduced in the previous two books. Ivy is doing a strong job of widening the scope and mythos of the series even as she maintains the well established strong points, and Devoured By Darkness continues the trend of adding depth to this quick-moving, fast-talking, and so sizzling paranormal romance series.

I've always felt the strength of this series lies with the incendiary chemistry between the male and female leads in each book, as well as the snappy, snarky dialogue and fast action, and I have a soft spot for stubborn, set-in-their-ways males meeting their mates in even more stubborn, fiercely independent, smart, and tough females. In that respect, Ivy hits all my happy spots. Toss in the diminutive gargoyle Levet, a force unto himself, and I enjoy the heck out of this series.

That being said, I had some problems with Devoured By Darkness. The story picks up right where the ancillary plot thread of Tane's hunt for the jinn left off in Beyond the Darkness (Guardians of Eternity, Book 6), but instead of immersing me right back into the action, I had a hard time getting into sync with the characters and felt a step behind for the first few chapters. I would have preferred a bit more exposition and a different introduction to Laylah in particular. I had enjoyed Tane's intensity and power when we met him briefly in Darkness Unleashed (Guardians of Eternity, Book 5) so I was prepared to enjoy his character - and I did - but I wish his introduction to Laylah had started out a little differently.

I also liked the plot of the book, but thought the pacing dragged a bit through the middle - a first for me in this series. Laylah and Tane bounced around a lot as they raced for answers and tried to stay alive, but instead of instilling me with a sense of urgency about the building danger, it almost felt more like a distraction to the primary conflict than a part of the journey to it. The scenes with the villainous vamp and her maniacal mage were creepy, but lacked definition and development. Transitions from scenes between Tane and Laylah and the evil duo were abrupt and seemed random and occasionally disjointed instead of flowing together into a cohesive, steadily building crisis point. The brief scenes with Caleb and Cassandra were also sparsely developed with a dearth of exposition and seemed to drop down into the story at odd intervals. There were also a couple of plot threads that weren't resolved by the end of the book, like the issue with Laylah's mother, but I'm holding out hope that that particular issue will be addressed in a subsequent novel.

On the positive side, Tane and Laylah were a good couple with strong chemistry. I wasn't sure of Laylah at first, but by the end, I was fond of her. Tane, on the other hand, I liked from the beginning (there may have been drool). Some of the brightest spots for me featured the hunter Jaelyn and the Sylvermist Ariyal and the subtle but intriguing teasers for their story in the next book. I always love Levet, and anytime I get to see the Anasso Styx I'm a happy reader. In fact, Ivy's habit of renewing our acquaintances with past lead characters has always been a point of pleasure for me. I really enjoy seeing glimpses of the continued lives of the previous HEA couples. I have to say, though, after just a few scenes with Jaelyn and Ariyal, I'm most looking forward to Bound by Darkness, the next installment in the Guardians of Eternity series.

Devoured By Darkness wasn't my favorite book in the series, and it had a few flaws that some of the other books didn't have, but it's a transitional book that introduces the series to a new arc with a lot of potential and new characters that have a lot of promise...and already have a heck of a lot of heat. It's exceptionally nice to read a series that still has a sense of freshness and a firm direction seven books in. It bodes well for the series as a whole.

Return from Devoured by Darkness to Paranormal Romance

Return from Devoured by Darkness to One Good Book Home