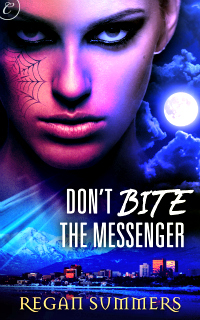 Being a courier for the technologically challenged vampire population is a balls-to-the-wall adrenaline rush that pays very well, but it doesn't come with any of those nifty bennies that safer, tamer jobs offer. Like a long life. In fact, at twenty-six, Sydney Kildare is the oldest runner in Anchorage, and she's just a few runs shy of her goal of retiring somewhere hot and sunny. And vampire-free.

Unfortunately for Sydney, one of her runs lands her smack in the middle of a vampire turf war, and as excellent as Sydney is at staying off vampire radar in normal situations, the grim fact is that they are the ultimate predators. If they focus their attention on finding you and using you, you get found and used. For whatever nefarious purposes they have.

Well, either that or you get real dead, and that would definitely put a crimp in Sydney's retirement plans.

Novellas and short-length novels are often hit-or-miss with me not so much because of what's written on the pages, but because of what isn't. Novellas such as this one, which appealed to me on a lot of levels, can still leave me feeling like I was missing something from the read. When the story is especially promising, or the characters particularly likable, as was the case here, I can often feel very frustrated by the end.

I loved Sydney, and the gritty, dangerous life she's living as a vampire runner. Her character, which is nicely rounded out with several quirks and peccadilloes to make her interesting, had enough heart and inner strength to make her an easy champion for the series. The brief but tragic glimpses into her past were especially nice. I loved Malcolm, too, though I still don't feel like I've got a complete handle on his character just yet.

The world they inhabit felt fresh and original, and the amount of world-building was excellent for novella-length fiction. For all that goodness, though, I felt several key elements of the external conflict lacked the definition and explanation necessary to make it really work for me.

The bulk of the plot conflict revolves around Sydney's significance to the vampire community in general and the master vampire Bronson in particular, but I never really felt that the importance of her job and her uniqueness in doing it had been defined well enough to allow me to accept the amount of effort spent in targeting her. Because of that, and despite how much fun her being targeted was to read, the reasons behind it fell flat, which crippled the plot for me.

I was okay with the abrupt ending and lack of resolution to a big portion of the external conflict, though, which surprised me. Maybe the fact that I had the "first" book in the series to read at the end of this "prequel novella" tempered my feelings in that regard. I will say this, though, I can't imagine, given where and how this novella concluded, that reading the "first" book in the series would be a good idea without first reading this "prequel." This story just contains too much groundwork for a world and conflict that, if not resolved in this story has to at least be given some attention in the next.

With Sydney's appeal as the heroine, and the intensely awesome burgeoning relationship between her Malcolm, I'm very much looking forward to seeing what Summers can do with it all in a full-length novel. Using this novella as a measuring stick, this series has a ton of potential to rock my Happy Reader buttons in all the right ways. 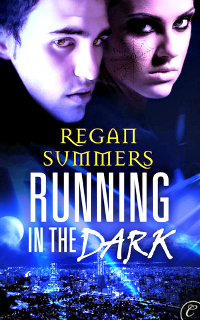 Return from Don't Bite the Messenger to Urban Fantasy

Return from Don't Bite the Messenger to One Good Book Home