Surprisingly Fun UF - Even With the Flaws 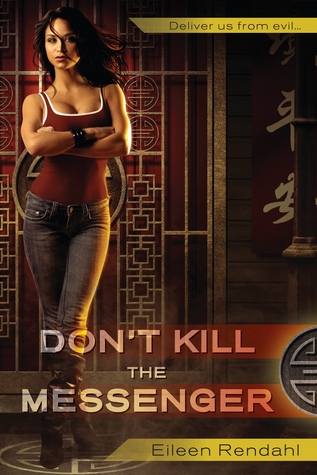 Ever wonder how all those kick-ass heroines in popular Urban Fantasy got their start? How they actually became kick-ass? You don't usually see the mighty heroine's more humble beginnings - by the time they're heroines, they're usually already there. Well, Melina Markowitz may just be the answer to those idle wonderings. An unexpected drowning and resuscitation at the age of three marked Melina as a member of the arcane and called her into service as a Messenger...sort of like the supernatural's answer to FedEx. She scurries to and fro with messages and items that need to get from Point A to Point B when the exchangees are better off not meeting face to face. With her calling come the nifty perks of better-than-human speed, strength, senses, and endurance...but no paycheck, so she's stuck working not just one side job but two. She's an admissions clerk at the local ER by night and a part time martial arts instructor by day. She knows several different disciplines of the arts, but that didn't come with the calling - that came with hard work, a lot of practice, and the guidance of best friend/mentor/former Messenger herself Mae, who owns the dojo that Melina works/trains at.

Melina's leading her slightly-more-than-average life with as little effort as possible, when one day a routine drop turns ugly, and she's beset by ninjas, gets her butt firmly kicked, and stumbles onto an insidious evil that's taking over the streets of her town. Try as she might, she just can't seem to push the responsibility of dealing with this evil off onto anyone else - and she tries really hard to do just that - so she's stuck dealing with it herself. But what the heck is she going to do about it? She's just a Messenger, after all!

With a potential love interest (who'd be perfect if he wasn't a cop), a McDreamy-esque ER doctor who makes her drool (who'd be perfect if he wasn't a vampire), and a surly but protective bartender (who's yummy even though he's a werewolf), Melina is going to find out just how kick-ass heroines get their start as she struggles to find out what's going on while keeping everyone she cares about safe... But there is very little 'safe' in the world of 'Danes (mundanes/humans) or 'Canes (arcanes/supernaturals) - and straddling that fence between the two like Melina does is the most dangerous place of all.

Great premise in Don't Kill the Messenger, and definitely a quick, sometimes humorous, but definitely deadly new urban fantasy premiere. I liked it quite a lot, and when she wasn't annoying me, I enjoyed spending time in Melina's head. There's much to appreciate here, with Rendahl adding a fresh voice and new eyes to this original UF novel. Points to her for offering a well-worn genre some new blood with some bite of it's own. The plot kept my interest, was paced quickly and smoothly, and was dangerous enough to be truly threatening. There were, however, some problems for me that kept it from being a truly great read.

Don't Kill the Messenger is told in first person from Melina's perspective, and I had some problems with the narrative. Melina doesn't explain much about the world she's living in - the narrative is more about her thoughts on every little thing...even the most mundane, like how much she loves her car...and that causes two problems: the world never really becomes totally clear or real for me and the rambling internal monologue gets old (I was very tired of hearing about her car far before the end) and seems silly in the face of true crisis at times. I can deal with the rambling because that's where the humor really shines, and there were many moments that made me chuckle, but I definitely felt the hit on the lack of world building. I also felt there was a disconnect between how Melina describes herself (as "able to kill with her pinkie" at one point) and the fact that she gets her butt kicked or gets manhandled over and over...even by a single human ('Dane). More than once she praises her enhanced senses and strength, and every time, they fail her in one form or another. That's a problem for me, story-wise.

A couple of plot problems niggled me, too. I started wondering why, if not delivering a message or package caused cosmic and increasing bad luck for Melina, there were no ill effects of having one stolen from her by those butt-kicking ninjas, and no reason given for why there weren't any (a simple nod to the difference between being stolen and being ignored would've sufficed, but it should've at least been addressed). Or how someone could make exact duplicates of something they've never seen before (details withheld to prevent spoilers). There were also a plethora of cultural and pop culture references and I didn't always get them.

Mae calling Melina to task for being irresponsible and telling Melina she needs to take a stand was very abrupt, but the issue was compounded by Melina's downright petulant and childish reaction to it. Nothing about that really worked for me, and while I can understand the necessity of the wake up call, I wish it had felt more organic to the story and that Melina's reaction to it didn't make her seem like a five year old. I was very glad, though, that Melina's ambivalence and blinders-on lack of concern with the world around her as a whole was addressed. At one point she blithely mentions that she figures something she delivered at one time or another contributed to someone's death...and I was a little horrified that she could be so...detached about that. Some coping mechanism or thought should've been interjected here, because we've surely read every other thought that passed through Melina's head. To not do so in this case made her seem extremely self involved to the detriment of her character.

Those were all annoyances that lessened my enjoyment of Melina as a character and the book as a whole, but there's one big thing that just ticked me off and frustrated me to no end, because it's one of my top three major pet peeves in books. Stupidity. Rampant, idiotic stupidity. Melina suffered a severe case of the stupids as the conflict of the book reached it's climax. Everything she did, most of what she thought, and just about in every way possible, she was stupid. There were a few smatterings of a ditzy lack of intelligence through the first part of the book (the surveillance camera incident, for example), but towards the end, when relatively mild Messenger girl tries to turn into the Messengernator, the climax (in my opinion) fell apart. Several B-grade horror movie cliched no-no's were tossed in, and both Melina's internal monologue and the character's dialogue went really, really wrong. It was an unfortunate turn that didn't quite recover by the end, but the impact was lessened by some good stuff, too - the way Melina's circle of friends started to come together, the interplay between Alex, Ted, and even Paul, and some other things that were positive enough to not forgive...but at least smooth out my overall impression of the book in total. I would've happily offered up four stars prior to the Melina intelligence meltdown, though, so it did have an impact.

I would still recommend Don't Kill The Messenger for those who truly enjoy urban fantasy and really jones on fresh story telling, but I would caution those who are sticklers for world building and like their kick-ass heroines smart at all times. Melina's not there - yet - but I definitely think she's moving in that direction. I plan to follow this series and look forward to book two, hoping for more character growth and a bit more world definition. Still, the fresh story, decent secondary characters, and a pleasant amount of action were very nice.

Return from Don't Kill the Messenger to Urban Fantasy Genre