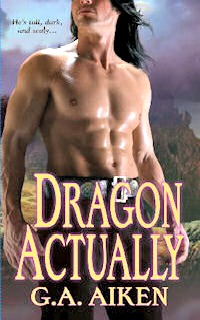 As a recent fan of Shelly Laurenston, I felt compelled to pick up the first of the Dragon Kin series written by G.A. Aiken, aka Laurenston. I'm so glad I did! Dragon Actually is the story of Annwyl the Bloody (but she hates when they call her that) and Fearghus the Destroyer (he's actually sort of fond of that). Annwyl's on a quest to kill the tyrannical leader of her people. He just happens to be her half-brother. And she's really good at fighting...just not quite good enough. Fearghus the dragon saves her from a brutal death, then trains her - in his human form. He has every intention of telling Annwyl the truth of who he is, but she wants no part of hearing it. And when he falls for her, when he wants her as a mate forever, he no longer feels he can tell her...because she's told him while in his dragon form that the man who's been training her drives her nuts...and even though she loves getting groiny with the knight, it's not a love match.

So what's a two-formed dragon to do?

I really enjoyed Dragon Actually, and very much enjoyed the powerful and compelling yet also oddly vulnerable Annwyl. She's a delightful heroine. Fearghus is just to die for. I love him as both the supportive dragon friend and the sexier than hell knight. And his family is a riot. I can't wait to read more of them.

I will say this, though...I had a problem with a decision Fearghus made late in the book. It was such an odd choice, and seemed so out of character, that it really made the book as a whole stumble out of a five star rating for me. And in truth, I wish Dragon Actually had been a bit more fleshed out during the final conflict. I think the ending could've benefited from more development.

Also, Dragon Actually contains the short story of Fearghus' parents, Bercelak and Rhiannon, and I wasn't as fond of that story, Flames in Chains. It was okay, and written fine, but there are aspects of that story that are not in line with my personal preferences for reading, so I would rate it 3 stars. That does not affect my rating or review of Dragon Actually, because I don't think of this book as an anthology. That said, I am looking forward to continuing the Dragon Kin series. I just can't get enough of those dragons!

Return from Dragon Actually to Genres

Return from Dragon Actually to One Good Book Home