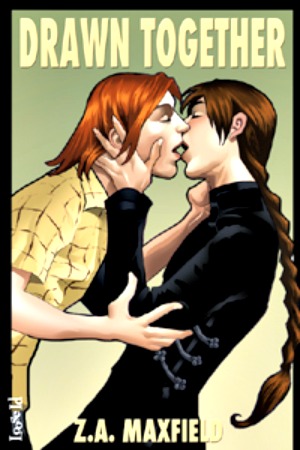 Between grad school semesters, Rory Delaplaines left his home of St. Antoine's Parish, Louisiana to drive across the country out of a fierce love and yearning for the woman behind the art and artistry of the elusive Anime artist Ran Yamane, feeling connected to her in a way he can't explain. His intentions, while naive, were romantic. When he finally got to her table at the Long Beach Anime Expo, carrying a bouquet of flowers, his heart on his sleeve and her art in his bag, he was crushed to realize that Ran Yamane could never be the woman he thought she'd be. He wasn't a woman at all.

Exotic and beautiful beyond the telling of it, Yamane was used to the sort of thoughtless adoration his looks and his body drew from both genders and across all sexuality lines, so the slow speaking, respectful southern boy that shows up in front of him shouldn't have been any different than the other throngs. But something about Rory sparked interest in Yamane. Useless interest, he's sure, as the gallant knight errant was decidedly straight, but interest just the same.

An act of generosity on Yamane's part and an act of nobility on Rory's draws these two men together in ways that neither one had expected or even dreamed. When a psychopathic stalker hits them with the force of a hurricane and with far more evil intent, they will band together to escape with their lives, and their cross-country exodus to safety will alter the perceptions...and passions...of them both.

I thoroughly enjoyed Drawn Together and have such an appreciation for the characters that Maxfield has created here. Rory is a charming gentleman, at turns young and naive and intent and honorable. He's a bit of a contradiction with his slow, southern drawl and his quick wit, an easy manner belying a core of steel. Being a former SciFi convention fangirl myself, I was delighted in his beginnings in this book, as his motivations - while extreme and fanciful - struck such a chord of truism in me. I loved everything about him as a character, and admired the deft but subtle growing awareness of himself as his saga with Yamane evolves.

I wasn't quite as enamored of Yamane, who occasionally struck me as a bit selfish, a bit prissy, and sometimes mean, but his was definitely a case of a person being improved by his companion. Rory brings out the best in him, and through Rory we see those kernels of loneliness and disquiet in Yamane that ease only with his prince in his arms. Surrounded by wealth, endowed with talent, graced with beauty, Yamane is a man who's often at the mercy of his looks, with little substance in his life beyond his art until one true southern gentleman shows him that he is extraordinary for more than what lies on the surface. It improves Yamane greatly.

I loved their relationship and the storybook path of their trials and tribulations. It was like an exquisite fairy tale...with all the yummy parts included. Something about their journey together, their bond and their romance, felt uplifting for both its complications and its purity. It was a uniquely satisfying reading experience.

That's not to say that everything was perfect. Maxfield has a clean, genuine writing style that strongly supports her fluid narrative, but the dialogue between the characters seemed overly florid at times, and out of character for the participants. It wasn't a consistent problem, but I did feel there were several places that seemed to be more formal than natural conversational flow would account for - and as I've spent most of my life in the south, hearing various cadences of the different southern dialects and colloquialisms, it was most notable in Rory's dialogue.

The crazy stalker plot arc was nicely done, and I enjoyed the tension that added to the situation. I was especially pleased with the realism in the characters actions and reactions once that storyline came into play. I found the believability of their reactions went a long way in increasing the pathos in the book. Also well done was the depth and dimension quickly developed in the secondary and ancillary characters. There were several in the book and whether just briefly featured or allowed more page time, each one felt genuine and natural in their settings. It was a pleasant surprise and a mark of a higher level of sophistication of storytelling.

I have to admit, though, I wasn't totally sold on the story all the way through and thought the book went a little awry after the resolution of the stalker arc. The plot wasn't the problem - I understood and believed the actions of both characters and it felt organic to their definition, but the narrative became a little choppy as the timeline started jumping. Up until that point, the story had been told in a more real-time format as the men fled from danger, then towards resolution, but once the stalker issue was dealt with, the leaps in time started. Perhaps necessary for the continuing development of the relationship between Rory and Yamane, it still felt a bit awkward and disjointed after the preceding flow. And there were moments as the conclusion was being reached that I felt the characters lost their cohesion a bit, and acted a slight bit off from how they'd previously been defined. That didn't last long, though, and they were firmly in focus for their heart-melting conclusion and touching epilogue.

At it's core, Drawn Together is a sweet romance, but there are many more layers to this wonderful story that make it a true pleasure to read and experience again and again. The characters will stick with me in the sort of way that will always leave me hungry for a sequel. Kudos to Z.A. Maxfield for penning another deeply drawn, richly developed, and tenderly felt exploration into the lives of her characters.

What Other Visitors Have Said...

This story had one of the funniest lines I had read in a long time. I truely laughed out loud and than looked around for someone to share it with. And here it is :D
"So this is camping? This isn't camping! This is just the WORST MOTEL we've been to yet."

Pie and Cake,
Hey! Thanks for the comment - you're absolutely right. That line made me chuckle too. There were others, too, that made me grin.

Return from Drawn Together to LGBT-M/M

Return from Drawn Together to One Good Book Home