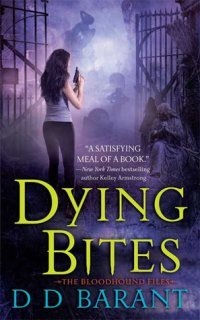 Jace Valchek is an FBI profiler who's having a spectacularly bad dream - a dream in which she's yanked out of her own universe still dressed in her pajamas and plopped down into an alternate universe in which humanity has been reduced to a measly 1% of the population through methods Nazi Germany would laud. An alternate universe where vampires and lycanthropes are the majority and one of the few humans left is running around with a serious axe to grind and executing members of that majority. And the vampires and lycanthropes don't have the first clue how to track and capture a human serial killer, necessitating Jace's speciality and her abilities.

To make matters worse, Jace quickly realizes she's not asleep, and in fact the world in which she's been un-ceremoniously dumped...or perhaps not so unceremoniously, as we find out...makes her viciously ill just to be in it.

And that's just the barest of bare bones of the synopsis of D. D. Barant's first book in a new series, Dying Bites, and I can only hope to see much more. I thoroughly enjoyed it. The depth of plot and the characterizations were detailed and fleshed out and while the pacing lagged a wee bit here and there, over all it was pretty well rounded and cleanly told. I enjoyed Jace - she's a sarcastic smart ass without a whole lot of peo...er...social skills, and I've always found that fun when it doesn't cross the line into total bitch. I was relieved the author didn't spend an overtly large amount of time getting Jace to accept her predicament and I really enjoyed how Jace used the quest for the serial killer as sort of a normalizing agent - considering how not normal her life has suddenly become. I was particularly fond of the golem Charlie, who through the book became a true favorite of mine.

It's certainly not a light read, as the author doesn't shirk on giving a pretty clear picture of how the human population dwindled to a shocking 1% during roughly the equivalent of WWII, and the book deals with nothing but gray areas, considering the killer is human and sorta has a point in why he's doing what he's doing, and the people responsible for pulling Jace into this mess are exactly the people responsible for that genocide. In fact, that's one of the things I really enjoyed about this book. I prefer books that deal with the many and varied shades of gray. Even Jace, as the heroine of the book, isn't a traditional White Hat by any means. Another particular pleasure were the parts that differentiated their world and ours - historically and culturally. Definitely an original, unique premise, and I'm always up for anything in the SciFi/Urban Fantasy/Paranormal book realm that's original and unique. They're hard to find.

I will caution readers who prefer paranormal romance to "straight" AU fantasy/urban fantasy that you may not enjoy this book. There is some emotional tension between Jace and Vampire NSA chief David Cassius - the vampire responsible for bringing her into the world and the one holding her ticket home (dependent on her catching the killer and ending his reign of terror) - but that tension is as far as it goes and while there are a couple of hookups, they're by no means romantic. If you just want a good read and can take the romance or leave it, then I recommend Dying Bites. I really enjoyed it.