Apparently I'm NOT So Easily Amused 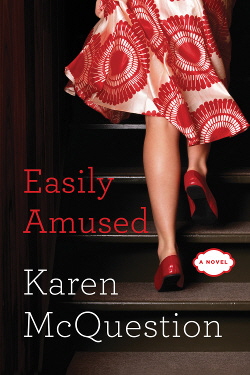 Lola is almost thirty. About four months ago she inherited a house following the death of her Great Aunt. The reason she inherited and not another member of her family is still a mystery, as they weren't close. She loves the house, but she's beleaguered by neighbors with a too-active interest into hers' and everyone else's life. Loves living alone and having her own space (she's been stuck with more than her share of bad roommates)...until her best friend Hubert is quite forcibly removed from his now ex-girlfriend's pad and has no place else to go. She loves her job, but isn't crazy about her co-workers. Loves her other best friend, Piper, but can't really be bothered to care overmuch for Piper's child or her husband, whom she thinks doesn't have nearly enough of an active roll in raising said child. In short...and unfortunately in total, Lola is just not that nice of a person. And that's a big problem because Easily Amused, what I believe is supposed to be a light romantic comedy but in truth is anything but, is told in first person POV. Lola's POV.

Giving credit where it's due, I have to admit, once I started Easily Amused, I couldn't seem to put it down. The narrative is oddly compelling and the story told in smooth prose that flows quickly and is rather easy on the mind, if not the conscience. It's populated by some rather adorable and quirky secondary characters. Personally, I wish they'd rubbed off a little more on the self absorbed, critical, judgmental, and immature Lola. I think they were supposed to...or by the end we were supposed to believe they had...but I can't say that part of the plot - or any part, really - really worked for me in any realistic way. The plot was not as well developed or interesting as one would hope, and mostly revolved around the rather idiotic idea that to get her sister Mindy back for mentioning Lola's birthday at the wedding Mindy was having on that day, she would bring a studly piece of arm candy to the event and announce her own "engagement," thus stealing Mindy's thunder and ruining her attempts to humiliate Lola by pointing out in front of family and friends that Lola is thirty, unmarried with no prospects, whereas Mindy herself is getting hitched to her high school sweetheart.

Lola is a woman who criticizes everything and everyone in her life, even her best friends. She's hypocritical - leaving a blistering voicemail for Hubert for some imagined thoughtlessness, then being utterly thoughtless herself more than once. She's utterly self important - when she needs to vent to her best friend Piper she's annoyed at the obligations of the new mother for her child. She's hideously judgmental - raking each of her neighbors over the coals in her mind, neighbors that come to her aid at the drop of a hat again and again just out of a sense of neighborliness. She's spiteful and utterly childish in relation to her sister - whose character, admittedly, makes Lola look almost saintly, but that doesn't excuse the behaviors.

I didn't like Lola. I loved Hubert, that sweet and caring man, and I loved the colorful neighbors with their good intentions and their kind souls. I even liked Mrs. Kinkaid, a member of Lola's staff. Ryan - the dashing love interest, and Lola's sister Mindy were developed more like caricatures than characters, her sister in particular as a stereotypical venomous, vicious little bitch and had she been my sister I would have long ago disowned her. That Lola hadn't given the list of shenanigans Mindy pulled off throughout her life made Lola seem sort of pathetic on top of all the other issues there were.

It's a shame that this book hadn't been written from a third person perspective, because Lola's questionable character and unappealing personality could have been muted with some broader strokes given to Hubert and the neighbors. It's also a shame that the plot hadn't had more thought and care given to it, or evidenced more of a change in Lola's personality as it progressed. A less subtle epiphany would have been enough to pull my rating up because it really does all depend on Lola's character development. As it's written, however, I found nothing much to recommend it and sadly, was not amused.