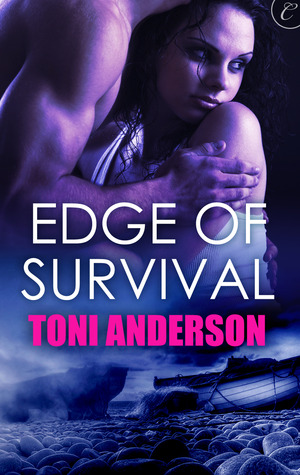 Stumbling upon a dead body on the first day of a new assignment doesn't exactly imbue biologist Dr. Cameran Young with a sense of calm confidence and hopeful enthusiasm. In fact, it freaks her the hell out. She's in the northern Canadian wilds to head an Environmental Impact Assessment team in part because it is both her job and her passion to ensure that the large mining operation in the area will have minimal impact on the delicate ecology. The other part is the sheer challenge of the location and a gritty determination to live her life by her own terms. Terms that don't include letting her Type 1 diabetes and the fear of its potential ravages dictate her choices and rule her life.

A brutally murdered young woman, though, is more than she bargained for.

In shock from the discovery, she hardly remembers the arrogant pilot pulling her away from the scene and rushing her off to his chopper before he calls in the body to the authorities. She isn't too clear on the flight to the research vessel, either. Once there, though, and faced with surly and sarcastic helicopter pilot Daniel Fox, she's ready to lay the blame of the murder at his feet.

Disgraced SAS Sergeant Daniel Fox is struggling with the memories and guilt born in brutal combat. He flies like the devil is chasing him, boozes it up to quiet the night terrors, and beds women indiscriminately. As far as coping mechanisms go, he knows it's self destructive. He just doesn't have anything else. One look at Dr. Cam Young and he knows she's trouble. It doesn't take him long to realize that first impressions are misleading. Dr. Young isn't trouble. She's a catastrophe waiting to happen. What stuns Daniel is that for the first time in several years, he actually feels concern for someone other than himself, and an unfamiliar desire to protect the woman.

Cam's penchant for digging up disaster throws the two of them together in ways that are uncomfortable for both of them. When the proud doc and the daredevil pilot are forced to work together, though, discomfort turns to desire...but giving into the heat rising between them might be the most devastating catastrophe of all.

There's so much to like about this latest romantic suspense by Anderson. I loved Cam and Daniel as the main characters and thoroughly enjoyed them together in the romance arc. Cam is a fiesty, intelligent heroine afflicted with a horrible disease. I respected her attitude towards her diabetes, as well as the way she managed it. I have to say, I even loved that Anderson wrote a main character with diabetes. It's a disease that deserves a heightened level of awareness and I found it refreshing to read a heroine who isn't totally perfect in mind and body, who has significant life challenges to deal with every day. It's realistic and humanizing.

Daniel is also right up my alley for male romantic leads. He's not at all a nice guy at first, too tormented by his past and riddled with his inner demons to be anything but a selfish, self-pitying, womanizing prat. What I appreciated the most about his character, though, is twofold. He is self-aware enough to recognize his problems and at least try to rein in the most reckless of his behavior, and even when his attitude starts to improve, he is still saddled with his demons and struggles with his vices. That didn't just magically disappear under the calming influences (and too oft-written mystical healing properties) of the love of a good woman. He is much less a prat...to Cam, anyway...but he's still sort of a jerk to others at times (admittedly, mostly warranted). He's also a good man with a sense of honor, protective in nature, with definite alpha male tendencies.

The characters and their romance were the most pleasing elements of the book for me. I also want to give a special mention for secondary character RCMP Staff Sergeant Griff Kershaw, the Mountie who leads the murder investigation. I sorta loved him a lot and enjoyed every scene that featured his presence and perspective. In fact, I kept picturing Tommy Lee Jones (The Fugitive, Men in Black) when I was reading, because I could totally see Jones embodying the older, wife-weary, sometimes sheepish, sometimes comedic, dedicated father and pursuer of justice.

I am slightly less enthusiastic about the external suspense plotline. I think it was an interesting concept, and I understand the motives involved, but it didn't develop and evolve throughout the book in a manner that I felt added any significant level of suspense. After starting out with the gruesome murder of a young woman, the subsequent actions of the killer were decidedly less threatening to other characters. In fact, they didn't really affect the main characters in any direct way at all until the end of the book. That created a disconnect for me between the killer's actions and motives, the murder investigation, and Cam and Daniel's characters. So much of one that when the pieces all started to come back together again for the final conflict, I felt a noticeable lack of emotional impact from the reveal of the killer and the action that followed. Then, the big-picture end results disclosed in the epilogue-esque conclusion were so unsatisfactory to me that it lent an air of pointlessness to the entire thread.

The risks, the precautions, and the dangers surrounding Cam's diabetes, as well as the threats of Mother Nature inherent in the wilds of northern Canada, served as more gripping sources of suspense for Cam and Daniel than anything to do with murder. That crime ended up seeming, no pun intended, overkill.

I also had one or two lesser concerns surrounding secondary character Vikki Salinger, Cam's gorgeous former-model friend and lab assistant. She never seemed all that stable, and for all that Cam considered her a good friend, I didn't see any evidence of it in Vikki's behavior. She instead struck me as a boozing floozy; a vicious shrew whose presence neither helped Cam professionally, nor provided any source of friendship personally. In fact, the tart did little for the story beyond giving Daniel a place to dip his wick pre-Cam, then stir up discord by demonizing him all over the place after their hookup. And any redemption she could have had by finding a sponsor and altering her behavior was negated by her flapping her mouth to stir up trouble for Daniel with the Mounties. I found her character unlikable.

As a romance with suspenseful elements, set in a wide wilderness of sweeping vistas and dangerous flora and fauna, with two completely believable, realistic characters who effortlessly stir the sizzling chemistry between them, this book was a roaring success for me. Factoring in the external suspense plotline took a bit of the bloom off the rose. Just a bit, though. I was completely satisfied with the overall reading experience and enjoyed the book very much. I feel even more strongly for the romance story arc and the main characters. Like I said, there's much to like in this latest by Anderson. So much, in fact, that I'll happily wait for whatever she's got coming next.

Return from Edge of Survival to Romantic Suspense Book Reviews

Return from Edge of Survival to OGBDA Book Reviews Home