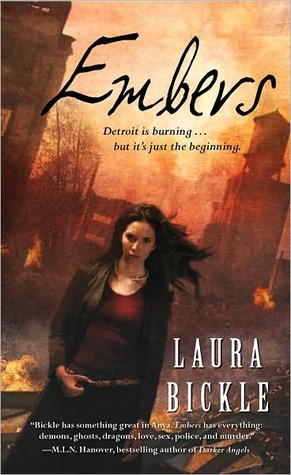 Anya Kalinczyk is a medium. A very rare type of medium, in fact, a Lantern, and not only can she see ghosts and other paranormal phenomenon, she can destroy them, taking them into herself and devouring them. But the price she pays is high and she's struggled to separate herself from the paranormal investigation team that goes out nightly to catalog and remove malevolent entities. Anya is trying especially hard to permanently quit that particular night job because by day, Anya is an arson investigator for the Detroit Fire Department and she's got a firebug on her hands, a deadly arsonist leaving an arcane symbol burned into the floors of three buildings. Tying the three fires together is one thing, solving them is something else, and as the clock ticks and tension and horror mounts, it seems her arsonist not only has a deadly deadline in mind...but his identity and motivation may be connected to that very part of herself she's trying to set aside. When the moon rises on Devil's Night - the night before Halloween - Detroit will burn unless Anya can stop it...and it's going to take a Lantern to keep the evil shadows at bay.

Anya's story and the start of the Salamander's Tales series is an adept and complex book that manages to really hit all the satisfied-reader buttons. It doesn't read like a debut novel, nor the start of a series, and both aspects I particularly admire. Instead of the author dropping us down into the story at the beginning of important events and forcing a ton of world building and character development all at once, it's more like merging with the on ramp of a smooth and fluid story highway, and both Anya's character and the world in which she inhabits feels fully developed and realized from the very first page because of it. Anya has been trying to separate herself from the paranormal investigation group she's been a part of and the people in the group, secondary and ancillary characters in the novel, as well as Anya's place in the group, are narrated in such a way that all the tension and conflict Anya is dealing with from the very first page feels very organic. It's an exceptionally nice device to use, as it allows the reader to really dig into the character without a lot of meandering exposition. In fact, in this particular instance, it allows the crap to start hitting the fan from the get-go and sets up the main plot of the story with shocking, yet fully detailed, depth and consistency. With just a small lull towards the middle of the book, the pacing remained steady throughout, and the blend of plot progression and world detailing was particularly well done.

Anya is a solid, strong heroine, and while I can't say that she's my favorite heroine ever, she didn't annoy me as so many do in the genre. She's smart, independent, yet tragically flawed by a past that left her traumatic memories of childhood and a whole pallet of guilt, not to mention an almost pathological doubt that she's worth getting close to. Her one connection to love and close interpersonal relationships is her elemental familiar, Sparky. The adorable hellbender salamander has been her only friend since she was a little girl and he both protects and helps her in both her jobs...when he's not sticking his tongue into a light socket or taking a bite out of a computer board. He's sort of like a slightly deranged yet fiercely protective and...glowy...rottweiler. I loved everything about him. I was also thoroughly impressed and wowed by the choices Bickle made for her antagonist in Embers. This is no cardboard-cutout villain, and the time and attention to detail in his development is something I don't recall reading in recent memory. As three dimensional and damaged as Anya herself, I was happily amazed by his contribution to Anya's character development and their interactions. The secondary characters - the rest of Anya's paranormal group - were also nicely detailed...some more than others, but enough to be fully participatory in defining and explaining Anya's character and giving it more depth and connection to the world around her.

I don't have much to say that's not fully complimentary of this awesome debut, in fact. The only issues I had were very minor. I thought the plot bogged down a bit towards the center of the book, and I can't really say why without giving spoilers, but I'll say that there was an event that I thought was a bit too descriptive and slightly overwritten. The two major plot points that were involved in that event could've come a bit quicker, I thought, without losing the overall effect of the event. I also didn't necessarily agree with Anya's decision making at key points. There was nothing I could point to and say, "Sheesh, that's stupid" - which is a relief, as I abhor lead character stupidity...especially if it's simply a plot device to get the characters or plot to a certain point developmentally. There was however a couple of instances where I got a little annoyed with Anya for being a bit stubborn or letting pride get in the way of the big picture. Each instance was, however, resolved satisfactorily and so it wasn't even a major distraction. The only thing that really wasn't resolved for me personally was that, even as impressed as I am with the book, I didn't have a whole lot of emotional connection to what happened to the characters - except, oddly enough, the scenes with Anya and the antagonist. For the rest, I understood what Anya was feeling on a mental level, but didn't really empathize with her on an emotional one. I don't consider that a failing in the book, however, just a fact. Without a doubt, Embers is a five star read in my opinion, and I can't wait for Sparks, the second in the Salamander Tales, due out August 31, 2010. Mark your calendars!