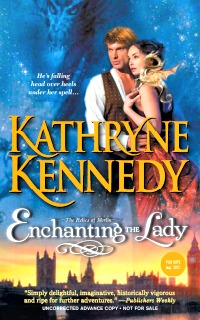 In London in 1882, peerage is decided based on magical ability, and shape-shifters, immune to magic because they are magic, guard the royal family and serve as baronets to His Highness Prince Albert. Terrence Blackwell, one such baronet, is a spy for the crown and is on a quest to search out and destroy all relic-magic, a dark and insidious magic imbued into thirteen stones by Merlin centuries before. Relic-magic is the only true threat to the magical power of the royal family and is responsible for Terrance's brother's death so he's ever-vigilant against it.

Duchess-of-Honor Felicity Stonehaven has a problem. Her magical trial is today and she's painfully aware she has no magic - or so little magic that she won't be able to hold onto her family's land and title. Her powerfully magical parents died at sea years ago and since their death she's been the ward of her Aunt and Uncle, but if she can't hold onto the Duchy, they will all be cast out. Most of the time no one even seems to see her, few remember her within moments of meeting her, and fewer still give her any thought at all, so mousy is she, and yet she's got all this responsibility weighing painfully heavy on her shoulders. It doesn't really seem quite fair to Felicity when all she wants to do is lead a private little life, perhaps marry, and be responsible only for herself.

When Terrence sees Felicity, he's bowled over by her beauty and rocked by the scent of relic-magic clinging to her. The beast in his heart just roars 'Mine!' and keeps wanting to rub himself against her. Which can actually be a little dicey when in public, but still. Despite the instantaneous and nearly feral reaction to Felicity, Terrence must get close to her, must court her, until he discovers if she is wielding relic-magic, and if so, find the relic and destroy it. He is, of course, strictly doing his part for crown and country. Truly. It has nothing at all to do with the irresistible pull of her gorgeous eyes or the charming nature of her winsome smile or the sharp, humorous crack of her intrepid wit. Really.

So begins the start of the Relics of Merlin series, and with a mix of gentle humor and a bit of angst with a touch of mystery and intrigue thrown in, Kennedy has taken historical romance and tossed it with some unique, fresh ideas to come up with a...well...enchanting read.

I liked the spin, actually, and thought the magical aspects fit surprisingly well into the age of Victorian England. The issues of class are touchstones in the genre, and here speciesism is added into the mix, as none of the magical lords and ladies are too comfortable with shape-shifters immune to the spells that would protect them should the shape-shifter population run amok.

I enjoyed Terrence and his manservant Bentley, and was particularly pleased with the almost befuddled helplessness against Felicity's charms that tripped Terrence up time and again. I was less fond of Felicity, as she is truly a lady of her time, and lacked the sort of fierce independence and self awareness that I admire most in heroines. Her nature was far more go-with-the-flow, no matter how bad her situation got, than rally-and-fight-injustice, and more than once she was a damsel in distress. Her character was well drawn, fully fleshed out and three dimensional, but simply wasn't to my personal taste.

The plot was a bit predictable but well-paced and though there was little surprise by the time of the climax and big reveal, the journey to it was pleasant and really allowed for some neat scenes between Terrence and Felicity. That's where the book really shined for me, actually. I got a kick out of them. Felicity is utterly oblivious to her worth and beauty and Terrence is struck dumb by them. The back and forth between them charmed me.

There were a few familiar historical romance cliches and a couple of characters' actions and decisions that I found to be questionable, but overall, the story unfolded nicely and had a nice balance of action and description. The historical romance genre isn't a favorite of mine and yet I definitely enjoyed enough of what I've read so far in this historical paranormal romance to continue the series, so I'm glad I picked it up while it's being offered as a free Kindle download.

Return from Enchanting the Lady to Paranormal Romance Genre

Return from Enchanting the Lady to OGBDA Book Reviews Home